?For many, this year the struggle became too much to bear? 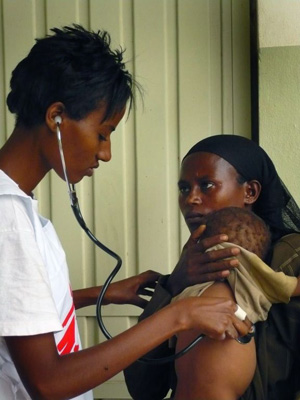 Jalalo is worried. His wife has brought their one-year-old twins to the Doctors Without Borders/Médecins Sans Frontières (MSF) inpatient therapeutic feeding center in Shashemene, in the Oromiya region of southern Ethiopia, to be treated for malnutrition, but his ten other children are at home with no food. “I used to work on the farms, guarding the food,” he says, “but there’s been no rain this year, so there’s very little work. Some days we eat, but mostly we go to sleep with no food."

And Jalalo is not alone. Since MSF started its intervention in the Oromiya region on May 13, more than 700 children with complicated severe malnutrition have been admitted to its three inpatient centers in Shashemene, Ropi, and Senbete Shinquille. MSF is treating more than 1,500 who are not suffering from complications, such as severe dehydration or malaria, on an outpatient basis in eight different clinics around the region.

“Unless there’s a huge increase in general food distributions I imagine that we’ll continue to see malnourished children for some months to come.”

In a country where about 7 million people routinely rely on food aid, malnutrition is nothing new. However, this year a number of different factors have made the situation much worse than normal. “In Oromiya, most of our patients tell us that they have no food because the early rains did not come this year,” says MSF’s Head of Mission in the region, Francois Calas. “But other factors, such as high rates of inflation and an increase in food prices, have also played a part. For most people here life is a daily struggle, and for many of them this year that struggle became too much to bear.”

Whatever the reasons, the levels of malnutrition that MSF teams are seeing are alarming. When launching nutritional interventions, rapid assessments are done to get an idea of the seriousness of the situation. An emergency nutritional project will generally be started if a rate of 3 percent severe acute malnutrition is found. In some areas of southwestern Ethiopia, recent assessments revealed a rate of 11 percent. As a result, MSF has set up an inpatient center in Kambata, one of the most densely populated parts of the region.

As an emergency medical organization, MSF is focusing on treating the most severely malnourished. But the impact of treating people will be limited unless more general preventive measures are taken. As Calas explains: “Sometimes we have to turn people away because they’re not malnourished or sick enough yet. It’s hard because we know they have no food at home and it may just be a matter of time before we see them again. We give therapeutic food and family rations to the patients that we discharge, but unless there’s a huge increase in general food distributions I imagine that we’ll continue to see malnourished children for some months to come.”