MSF's first ever International General Assembly in Paris drew members from all over the world to discuss the future of the organization's medical humanitarian assistance, medical innovation, speaking out, advocacy, and logistical support. 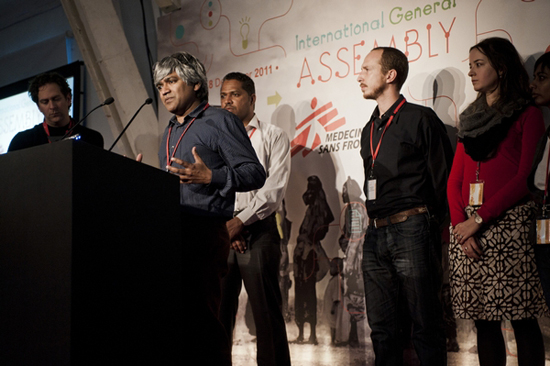 Paris/Geneva, December 20, 2011—Doctors Without Borders/Médecins Sans Frontières (MSF) concluded its first ever International General Assembly in Paris last weekend. Members of MSF gathered from all over the world to discuss the future of its medical humanitarian assistance, medical innovation, speaking out, advocacy, and logistical support. The Assembly welcomed four new associations and elected a new International Board.

On the same occasion, MSF also marked its 40th anniversary in the presence of several founding members.

The first International General Assembly (IGA) is the culmination of a process undertaken by MSF over recent years to review its governance structure. Until recently, only national associations based in Western Europe, North America, Japan, Hong Kong, and Australia comprised the international movement, working together with MSF’s International Council. Recognition that this structure does not represent the global movement that MSF has become was at the heart of the governance change. With the new set-up, MSF hopes to be better prepared for future challenges by allowing for greater participation by current and former staff around the world in shaping the organization’s way forward.

“It’s a great moment for MSF when we see our long-term decision-making open up to the reality of being a more global movement,” said Dr. Unni Karunakara, MSF’s international president. “It is confirmation of our determination to invite a broad variety of experiences and ideas to contribute to our future direction. And it is a crucial change for allowing our medical humanitarian action to remain as informed, innovative, and relevant as it has become over the past 40 years.”

“Today, we recognize the band of volunteers who started our sans frontières movement 40 years ago, here in Paris,” he said. “We have since become more professional, more international, and gained recognition in large parts of the world. Yet the core values first developed in 1971 continue to drive and inspire us.”

Several of MSF’s founders were present at the IGA and shared some of their early experiences with well over 300 participants, who collectively represented the organization’s development through the years.