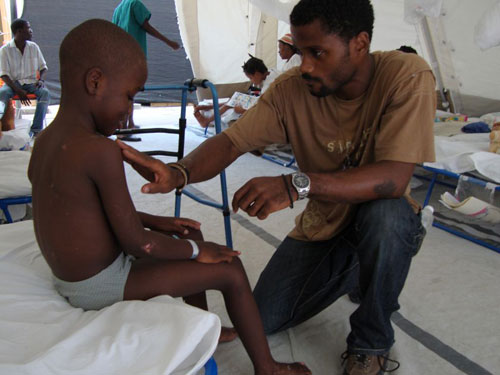 Haitian physiotherapsit Paul Gerard with a patient in one of MSF's rehabitliation and post-operative facilities.

Numbers as of February 18

In the weeks following the January 12 earthquake in Haiti, Doctors Without Borders/Médecins San Frontières (MSF) teams raced to provide lifesaving surgery and emergency medical care to thousands of patients. There are still people who need surgery—because their wounds haven’t healed, or weren’t treated in those early days, or have become infected—but in the main, MSF is now focusing on post-operative care, including rehabilitation, physiotherapy and mental health. For this reason, and because a number of medical organizations that came to Haiti just after the earthquake are now leaving, MSF is increasing the number of beds it has designated for post-operative care. Additionally, because so many people still lack sufficient shelter, MSF is distributing tents, blankets, and hygiene and cooking kits to some of the many displaced people stuck in makeshift, unsanitary camps.

What follows is an overview of MSF’s current activities on the ground. MSF had projects running at three sites before the earthquake staffed by approximately 700 people. There are now 20 sites, plus 7 more mobile clinics, staffed by more than 3,000 people. The numbers below are current through the end of last week.

A map of MSF’s operations in Haiti can be found here.

Port-au-Prince, Saint-Louis Hospital: Surgical activities are ongoing in the in the inflatable hospital MSF set up in the capital, which has 200-bed capacity and two operating theaters. Another operating theater, for burn victims, is planned. Since the facility opened, 614 surgical operations have been performed. The hospital provides complete post-operative care as well.

Port-au-Prince, Choscal Hospital in Cité Soleil: MSF intervened in this Ministry of Health hospital soon after January 12, focusing initially on earthquake-related trauma. There are two operating theaters for major surgery and one for minor surgery. MSF also works in the emergency room and the maternity program. The building was damaged by the earthquake, so the hospital’s 100-beds (at capacity) are under tents. Physiotherapy is provided to trauma victims, as well as psychological care. Since the earthquake, well over 1,100 emergency cases have been treated in the emergency room, and more than 100 babies were delivered between January 12 and February 12.

Port-au-Prince, Isaie Jeanty Hospital in Chancerelle: This gynecology and obstetrics referral hospital is used to for trauma and obstetrics cases. The hospital has a capacity of 40 beds for trauma and 85 overall. In two operating theaters, MSF focuses on trauma and orthopedic surgery. Physiotherapy and psychological care is provided to trauma victims. The emergency room has seen 790 new cases including 525 obstetric cases and 94 dressings. MSF supports the Obstetrics/Gynecology with 10 to 20 Caesarians per week.

Port-au-Prince, Lycée du Cent Cinquantenaire: Since the site opened on February 5, scores of patients have been hospitalized and receiving post-operative and medical care, mental health care and physiotherapy. An expansion of the site is planned.

Port-au-Prince, Site “Mickey”: The site known as “Mickey” opened on January 19. As of last week, 60 patients were hospitalized and receiving post-operative and medical care, mental health care and physiotherapy. More than 60 surgeries have been performed.

Port-au-Prince, Bicentenaire: Post-operative and emergency facility with surgical capability that offers general and mental health care, and pediatric and obstetric services. Capacity is currently 64 beds, but that should soon increase that to 100.

Carrefour, MSF field hospital: Around 30 surgical interventions are performed every day in this 80-bed trauma and post-op hospital, including orthopedic surgery, skin grafts, and muscle flaps, followed by post-operative care and rehabilitation in collaboration with Handicap International. MSF teams have seen approximately 200 outpatients for wound care; 70 have been hospitalized. Psychological care is offered to amputees and their families.

Jacmel: Full outpatient and inpatient services are available under tents that stand in for the badly damaged main hospital building and have a 70-bed capacity. Surgery is ongoing in the hospital’s operating theater.

Although a full range of post-operative care is offered in all MSF-supported structures where surgery is performed, some sites are specifically dedicated to tend to patients after surgery.

Promesse: This post-op structure had an initial capacity of 40 beds. Handicap International physiotherapists are working with us there, and mental health care is provided as well.

Delmas 30: The first 48 patients and their care-takers were transferred to this new post-op tented center from Saint-Louis hospital last week. The center will have more than 100 beds for people who require physiotherapy and mental health support.

Sarthe: This site, currently under preparation and due to open February 23, will soon accommodate 150 patients and two operating theaters.

Port-au-Prince, General Hospital: Although no surgery is performed by MSF at the general hospital, a team of nephrologists, nurses and technicians is supporting dialysis. The team has seen two different patient populations: initially, acute crush injury victims, and more recently, people with acute renal failure from previously undiagnosed kidney disease. As of last week, the team had treated 18 patients with severe crush injuries. In total, 96 acute hemodialysis treatments were completed. In addition, 20 existing dialysis patients continued to receive dialysis until their care could return to their local nephrologists. The nephrology team also used a portable machine to provide emergency laboratory services to other medical groups on the ground that were providing non-renal care.

Carrefour Stabilization Center for Malnutrition: Stabilization center and ambulatory feeding center for severely malnourished children, where more than a dozen children have been hospitalized.

Port-au-Prince, Martissant: This MSF structure provides an emergency and stabilization center through an outpatient department and a 45-bed inpatient department. There is also a 15-bed maternity service. As of February 18, the center had seen 3,389 consultations since the earthquake and done 454 dressings. Of those, 69 patients had open fractures and 152 had closed fractures. The current focus is on post-earthquake emergencies and pediatrics (half the hospitalized patients are children). There is an average of 5 deliveries and 80 consultations—mainly for children—per day.

Port-au-Prince, Site “Mickey”: The outpatient structure is still functional and the staff is performing 120 to170 consultations per day.

Léogâne and surrounding areas: OPD is operational in Léogâne, on the site of Hospital Sainte Croix. Mobile clinics are at work in Dufort and Darbonne in support of Ministry of Health teams. Additional MSF teams are performing mobile clinics in five other locations, between Gressier and Petit Goave. In total, 2,974 consultations were done last week.

Carrefour Feuille: A team of two nurses, two doctors and one midwife is running a tent clinic in a camp for 9,000 displaced people now living in the area, performing an average of 150 consultations per day and offering mental health services as well. Earthquake-related injuries are still evident but the main pathologies are diarrhea, skin disease, upper respiratory infection, fever and increasing requests for psychological counseling.

Carrefour Mobile Clinic: The team is working in a number of sites where displaced people have relocated, homes occupied by elderly residents, clinics and orphanages.

Village “Grace” IDP camp: The health-care unit includes inpatient and outpatient departments, antenatal and post-natal care, and a mental health component in a site where 15,000 displaced people are now living. Each day, 110 patients are seen.

Petionville Club Camp: A basic health care unit started working last week in this large camp, where an estimated 80,000 people are living. About 60 consultations are provided per day.

Carrefour Maternity Hospital: MSF supports this Ministry of Health structure with staff, fuel and supplies needed to run maternity and emergency obstetrics clinics that are open around the clock.

Dufort and Darbornne: About 230 consultations are provided every day with regular referrals to Léogâne hospital. There are two fixed clinics plus mobile clinics to the east (Gressier) and west (Petit Goave). Mobile clinic teams in Grand Goave are starting to see increasing needs in terms of general medicine and hospitalization.

Psychological care is routinely offered to patients who have been through major surgery in MSF-supported structures. But there are other mental health activities targeting specific groups. At the MSF facilities in Chancerelle, Choscal, and Martissant, a team of psychologists is supporting the MSF national staff and patients. At the Grace Village IDP camp, a clinic is offering psychological care.

Port-au-Prince, Ecole Saint-Louis: As of last week, MSF had distributed 1,800 tents in this camp situated near MSF’s inflatable hospital. Non-food items (NFI), including hygiene and cooking sets, will be distributed in the coming days.

Petit Goave: Complete family kits and tents have been handed out to 364 families

Léogâne: Distribution of 1,550 NFI kits in rural areas in the periphery of Leogane has been completed.

Jacmel: Distribution of kits to more than 1,800 families has been completed.

Martissant, Cite Soleil, Chancerelle: Water distribution has been achieved by establishing19 re-fillable bladders—including one in Martissant, five around Cité Soleil, one in Chancerelle, and three in Sarthe—focusing on IDPs close to the medical facilities.

Carrefour MSF Field Hospital: Water distribution to nearby camp and sanitary blocks, and provision of showers and latrines, is ongoing.

Lycée Louis Janvier: Water, hygiene and sanitation is being provided for the feeding center.

Léogâne (periphery): MSF is providing up to 250 000 liters per day to people in and around the city and has established latrines as well.

Grand Goave: Sanitation facilities have been established in four camps—Lifeline, Park Ferrus, Servants and Paradise. There are four to six latrines per block, as well as showers, water bladders, and seven water distribution sites for a total of 7,000 beneficiaries.
Port-au-Prince, Petionville and Carrefour Feuille: Portable or fixed latrines, portable showers, waste areas and water bladders were installed for a total population of 31,800 people.