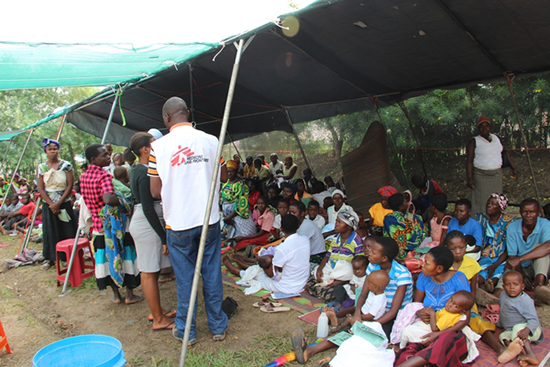 An MSF staff member meets with Congolese refugees in Unganda.

Nearly 50,000 Congolese have fled and crossed the border into Uganda following an attack on the village of Kamango, in Democratic Republic of Congo's North Kivu Porvince. MSF is working in a transit camp near Bundibugyo, where 20,000 people are staying, and along the border, where refugees have settled. Ruben Pottier, MSF's head of mission in Uganda provides an update.

How many people have arrived in Uganda?

According to estimates, 40,000 to 50,000 people have crossed the border to take refuge here in Uganda. However, it’s hard to know the exact number because many refugees are living in villages along the border, in schools or with families who have welcomed them. However, 20,000 people are estimated to be living in the Bubukwanga transit camp, set up by the High Commission for Refugees, approximately 18 kilometers from the border, alongside the village of Bundibugyo. 17,000 people have already been registered.

What are the sanitary conditions at the camp?

One of the primary concerns is drinking water supply. The current volume of 10 liters/person/day is inadequate. We are trying to bring that up to the emergency standard, which is 15 liters/person/day. The needs are not all being met currently, but we expect to reach that level in the coming days, with the arrival of trucks with high-capacity water tanks. The other concern is hygiene and sanitation facilities. We’ve got to build taps for drinking water and latrines because there is one latrine for more than 100 to 120 people right now. The standard is one per 60 people. The objective is to limit the epidemic risk to the extent possible.

What about the refugees’ health?

The Bubukwanga health center, where we are working, already has 20 hospital beds, including 10 labor and delivery beds. They are all full. We added a tent, which brought that number up to 30. We have been seeing more than 300 patients every day since July 18, primarily for respiratory infections among children, malaria and diarrhea, due to the poor water quality. We’ve got to be extremely watchful on that point.

As a preventive measure, a measles vaccination campaign for children between 9 months and 15 years is underway. We estimate that 6 000 children need to be vaccinated—not including the new arrivals—and we’ve vaccinated 2,600. We combined the vaccinations with nutritional screening and have already observed a high rate of moderate and severe malnutrition. We are currently treating 130 children.

What are the refugees’ living arrangements?

It’s being organized little by little and can sometimes move slowly. The organizations on site must coordinate their activities—Who's doing what? Who's responsible for what? Many of the refugees are still living in makeshift shelters that they built themselves. New tents are expected to arrive, to be used until the UNHCR builds shelters. Bubukwanga is a transit camp and the refugees stay there for just a few days before being transferred to a permanent camp. They’ve also received basic supplies, including cooking equipment and jerry cans for water and soap. The World Food Program provides also food rations as corn flour, beans, porridge...

What is the status of those who are outside the camp?

The UNHCR is trying to ensure that everyone who was in the villages and the schools along the border comes to this transit camp, which is supposed to be moved to another permanent site in the coming days.

We conducted a rapid evaluation of people housed with families. They have fewer needs. The population is fairly dispersed, which has not had any impact on the use of health centers. We may launch a measles vaccination and malnutrition screening campaign for these populations.