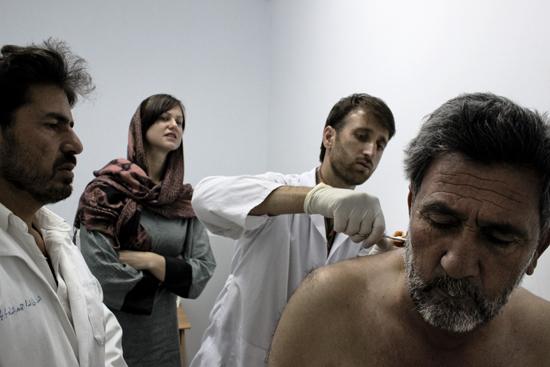 Following a huge gas explosion in eastern Kabul on the afternoon on July 4, Doctors Without Borders/Medecins Sans Frontieres (MSF) staff treated 70 wounded people at the nearby Ahmed Shah Baba Hospital.

Around 4 p.m., an explosion at a liquid gas reservoir in Paktia Kot triggered a massive fire that injured scores of people.

“We heard the first explosion very clearly, and then several more after that, and immediately started preparing for patients arriving,” says Jamale Chedrawi, MSF Project Coordinator in Ahmed Shah Baba Hospital. “It all went very quickly as wounded people started coming to the hospital en masse, the first one just 20 minutes after the explosion.”

In total, 70 wounded patients arrived at the hospital. One was dead on arrival, while 32 suffered from severe burns and were treated in the emergency room. Some patients also suffered fractures from jumping out of buildings to escape the fire.

The MSF medical team worked alongside hospital staff throughout the evening to stabilize the patients, most of whom were later referred to nearby hospitals specializing in the treatment of burn victims.

MSF has been working in all wards of Ahmed Shah Baba Hospital since 2009, with a focus on providing secondary health care for people in eastern Kabul. In Afghanistan, MSF teams also work in Boost Hospital in Lashkar Gah, the capital of Helmand Province. Over the past year, MSF has also opened a surgical hospital in Kunduz in northern Afghanistan and a maternity hospital in the eastern Khost province.

A strict no-weapons policy is implemented in all locations where MSF works in Afghanistan to ensure patient safety and security. MSF relies solely on private donations to carry out its work in Afghanistan and does not accept any government funding.