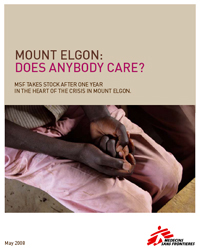 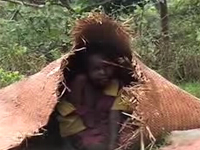 Nairobi, July 21, 2008—For the last three weeks, staff working for the international medical humanitarian organization Doctors Without Borders/Médecins Sans Frontières (MSF) have been stopped at road blocks and prevented by local authorities from providing medical assistance to the affected civilian population of Mount Elgon in western Kenya. MSF is calling on the authorities to lift the restrictions and allow the resumption of vital humanitarian relief.

"We were helping thousands of civilians until a few weeks ago and are extremely concerned for them,” said David Michalski, MSF's operations coordinator in Kenya. “Some have contacted us in great despair. Referrals to hospital of patients with emergency conditions are hampered given the lack of transportation which used to be provided by MSF, and vulnerable people are being left in harsh and cold living conditions without access to vital assistance,” he said.

Since MSF began providing free medical care to people affected directly or indirectly by the conflict in Mount Elgon in April 2007, over 35,000 medical consultations have been carried out by MSF teams, together with the Kenyan Ministry of Health. As recently as mid-June, MSF publicly called for an immediate increase in aid as well as an end to indiscriminate violence against the population.

The reality is that, today, MSF's assistance is being curtailed. Despite repeated attempts to discuss the matter with local and national authorities, no explanation has been provided.

Adding to MSF’s concerns, the blockage comes at a time when its teams are receiving reports of further attacks in one of the areas they used to serve. People who had sought refuge in the highlands of Chebongweny told MSF that their houses, shelters, and food reserves were burnt down nine days ago by armed forest guards. Blankets were either stolen or destroyed and the clearly identified MSF medical unit, where many people had spent the night in search of safety and shelter, was also burnt down.

“Intentionally attacking medical structures and hampering relief agencies from working, whether during conflict or periods of instability, are serious acts prohibited under the Geneva Conventions," added Michalski. "This attack shows, once again, how the civilian population in Mount Elgon is the first victim of this conflict and is in desperate need of assistance. MSF is calling on the authorities to meet with us, and to lift the current restrictions so that we can continue providing humanitarian aid to the people of Mount Elgon as we have always done — in a neutral and impartial manner."

MSF is one of very few humanitarian organizations providing assistance to people affected by the conflict in Mount Elgon. Dealing with the consequences of the violence against civilians, MSF's activities since April 2007 have focused primarily on providing free medical care through support to primary health care structures, immunisations, and mobile clinics in more remote areas. MSF has also established a hospital referral system for medical emergencies and distributed clothing and blankets.