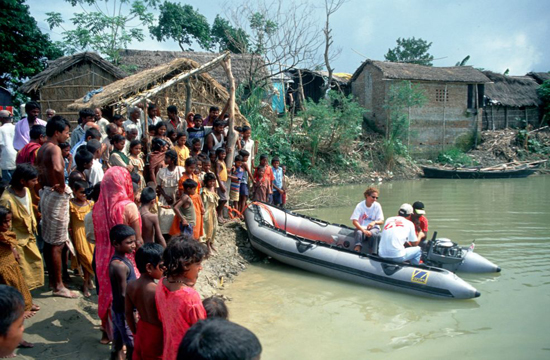 In 2004, as illustrated by the photo above, and in 2007, MSF provided emergency relief in the wake of floods in India's Bihar state. An MSF team has been dispatched to assess the needs of the most recent breach of the Kosi river, which the Indian government estimates has affected five million people across the state.

An emergency relief team from Doctors Without Borders/Medecins Sans Frontieres (MSF) has reached the areas worst affected by the flooding in Bihar State, India. The team, including a logistician, a water-sanitation engineer, and a doctor, are assessing the extent of the humanitarian needs in Araria and Purnea-Madhepura. The team has also brought supplies of non-food items for distribution to the affected population.

Yesterday the Indian Prime Minister declared the floods a “national calamity” and appealed to international nongovernmental organizations for humanitarian support. MSF has sent four trucks containing supplies of 15,000 tarpaulins, 4,000 blankets, 15,000 jerry cans, and water chlorination tablets for distribution to those affected by the floods.

The flooding is a result of a breach in the eastern embankment of the Kosi River on the Nepal side on August 20. The break forced the river water to take a new course through the eastern blocks of Supaul district. The break is currently an estimated 3 kilometers wide and is growing by 200 meters each day. The government estimates that around five million people have been affected by the flooding and one million people have been displaced. “We are not talking about the normal monsoon flooding. The problem is that the river Kosi has changed its course and the villagers and authorities are totally unprepared for this kind of crisis. There was no disaster management preparation and the authorities have asked for MSF’s and other organizations to help cope with the disaster,” said Mari-Carmen Viñoles, MSF Head of Mission in Delhi.

The severe currents forming across the flooded regions mean that motorized boats are the only safe means of evacuating people.

The top priority is a search and rescue operation. There are very few motorized boats available and only 50,000 people have been evacuated so far. The lack of motorized boats has also meant that it has been very difficult to assess the situation by water. This has meant that there is very little data available on the numbers of people who have died or are yet to be rescued. Some areas remain totally cut off and stories from those in the makeshift camps indicate that entire villages have been destroyed by the floodwaters with no inhabitants surviving. These areas are now starting to face acute food shortages.

The displaced people are taking shelter in temporary camps, in open land, on embankments, and by the roadside. Most people do not have proper shelters, and because the priority is the search and rescue operations, there is very little organization in the camps. There is insufficient drinking water available in the camps and those staying in the open are taking river water, which is unfit for drinking. It is estimated that a further 400,000 people will arrive in the camps in the coming days.

The most immediate needs for the population are food provision, plastic sheeting to build temporary shelters, water purification tablets, cooking utensils, buckets, and hygiene kits. Medical assistance and oral rehydration sachets are also essential to prevent disease among the population.