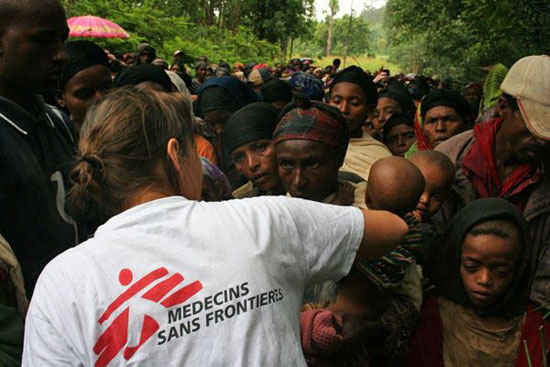 More than 16,700 severely malnourished patients, mostly children, have been cared for in MSF programs in the Oromiya and Southern Nations and Nationalities People's (SNNP) regions of southern Ethiopia. Among them, 2,071 children suffering from medical complications have been admitted to five stabilization centers, where they receive 24-hour medical attention. The remaining severely malnourished children have received nutritional treatment and food rations on an ambulatory basis in a network of 44 outpatient treatment projects (OTP).

Since mid-July, supplementary food rations—made up of a corn and soya blend with oil and sugar—have also been provided to 1,700 moderately malnourished children and their families. These supplementary feeding programs have so far been opened in three districts in the Oromiya and SNNP regions.

In Siraro district, Oromiya, MSF has to-date conducted targeted feeding distributions for an estimated 12,500 children. Each family with a child suffering from severe or moderate malnutrition, or even at risk of malnutrition, has received a 25 kilogram food ration and three liters of oil. The distribution of a second ration is due to start next week in the same locations.

In some areas of Oromiya and SNNP regions, the number of weekly admissions keeps increasing; the number of severely malnourished children treated has reached rare levels, indicating alarming malnutrition rates in these areas and insufficient coverage in some neighboring areas.

The lack of access to healthcare is also thought to make people more exposed to acute malnutrition. For instance, untreated cardiac or renal failures can lead to malnutrition.

While MSF is treating the most affected patients—those suffering from severe and moderate malnutrition—many more people in areas of southern Ethiopia rely on external aid and are in urgent need of more food support.

In Siraro district, MSF’s comprehensive approach—made up of therapeutic feeding programs and targeted food distributions—has led to a decrease in the number of admissions of severely malnourished children.

Recently, MSF began activities in Duna district, in SNNP region, to supplement an existing OTP. About 150 severely malnourished children have already been identified and incorporated into the program.

MSF is also assessing new areas, such as in Teru district, in Ethiopia’s Afar region.