MSF Treats Victims of Violence Against Migrants in Johannesburg 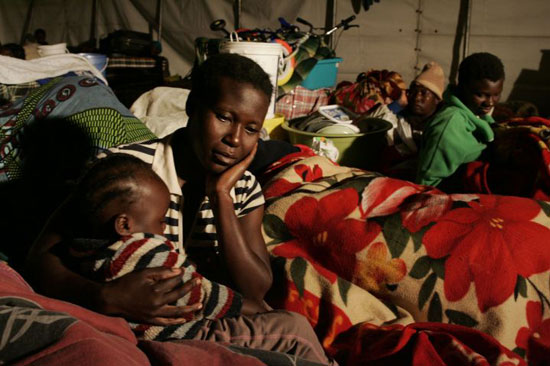 A woman and child take refuge in one of several areas around Johannesburg where migrants have fled to in order to escape the anti-immigrant violence that broke out on May 11.

In response to recent outbreaks of violence against migrants in Johannesburg, South Africa, Doctors Without Borders/Médecins Sans Frontières (MSF) is currently providing emergency medical care for wounded people seeking shelter in police stations, community halls, and other locations to which they have fled for safety. Since December 2007, MSF teams have been providing medical assistance to vulnerable Zimbabweans seeking refuge in South Africa. Following the recent outbreak of violence, mobile teams were swiftly organized to respond to the current situation, providing emergency medical care.

The violence, which is being aimed primarily at foreign nationals from neighboring countries, first erupted in Alexandra township on Sunday, May 11, and has since spread to several other townships, reaching central Johannesburg this weekend. MSF has sent mobile teams to a total of 13 locations, where there have been outbreaks of violence.

The violence has led to displacement and extreme vulnerability, particularly amongst women, children, and Zimbabweans who are denied refugee status in South Africa. MSF estimates that there are at least 7,000 displaced people only at the locations the teams assessed across Johannesburg. MSF mobile teams have treated more than 150 patients, most of them with violence-related injuries. Still, the MSF team has been unable to access the epicenter of the violent attacks and is concerned that the most acute needs are going unmet.

While a small number of local organizations, particularly the South African Red Cross, are mobilizing to respond to the basic needs of the displaced for shelter, food, and sanitation, they are being stretched to the limit. In some places of refuge, there are as many as 1,500 people sleeping, sometimes outside in tents or in the open, where they are vulnerable to further attacks.

“People have told us they don’t feel safe in these sites and our teams have witnessed acts of intimidation and attempts of violence,” said Rachel Cohen, MSF head of mission in South Africa. “They require adequate and organized protection and assistance from national authorities and relevant international actors.”

MSF is deeply concerned about the current situation and protection of displaced migrants and refugees in Johannesburg who fear for their lives and have nowhere to turn in the midst of a rapidly deteriorating crisis.

MSF has been working in central Johannesburg since December 2007 to provide Zimbabweans seeking refuge at the Central Methodist Church and surrounding areas with access to medical care. MSF also works in Musina, at the border with Zimbabwe in Limpopo Province, providing primary health care on commercial farms and in Musina township.