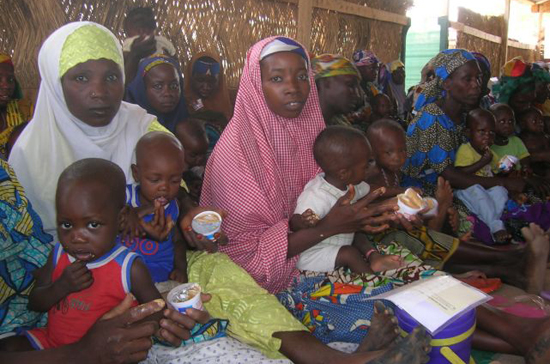 On January 21, 2009, the Journal of the American Medical Association (JAMA) published the results of a study on the preventive distribution of ready-to-use (RUF) therapeutic food products. This 2006 study, which was conducted in Niger, showed that the number of children who progress to severe malnutrition can be cut in half. These effective preventive strategies must be developed in areas where severe malnutrition strikes tens of thousands of children and is a major cause of death, explains Dr. Isabelle Defourny, MSF’s program manager for Niger.

What are the key results of the study published today in JAMA?

For the first time, a preventive nutritional strategy has been shown to reduce by half the number of children who suffer from severe malnutrition.

In areas with high rates of malnutrition, why wait for tens of thousands of children to reach the most serious stages of the illness, when effective preventive measures have been shown to exist?

In concrete terms, over a three-month period in 2006, we distributed one packet per day of the therapeutic version of a ready-to-use-food (RUF), sold under the brand name of Plumpy’nut, to all children from six months to five years of age in six villages in Niger. The number of children who became severely malnourished fell by 58 percent compared to the six villages where we did not conduct these distributions. In addition, there were half the number of deaths among the group that received these products. Even if the impact on mortality is not statistically significant, given the very small size of the sample, these results are quite encouraging and confirm our experience in the field.

Reducing malnutrition via the preventive distribution of adapted nutritional products would seem obvious. What is so important about this study?

It opens the door to finally be able to fight malnutrition effectively and on a large scale in places where it is a major cause of death among young children. Until now, the World Health Organization has not issued specific recommendations for such settings, other than to treat children with severe malnutrition. However, we must recognize that in areas where tens of thousands of children experience an episode of severe malnutrition every year, that recommendation is impossible to put into practice. Treatment requires large numbers of qualified medical staff, medical facilities allowing many children to be hospitalized and huge financial resources. The countries most affected by malnutrition lack adequate resources.

That’s what makes this study important. It proves that by changing the strategy, we can reduce by 60 percent the number of children who require treatment, and, thus, make it easier to help those who do need treatment. It is also a question of medical ethics. In areas with high rates of malnutrition, why wait for tens of thousands of children to reach the most serious stages of the illness, when effective preventive measures have been shown to exist?

What further work is needed for these new, effective, preventive strategies?

There is still a lot to do – including refining the composition of preventive nutritional products, determining the best distribution schedule, and devising new distribution methods. To continue to prove their effectiveness, experiments must be analyzed in studies to provide scientific proof of their likely impact on mortality.

We have continued to make great progress since the project featured in the study published in JAMA today. In 2006, we distributed the therapeutic RUF Plumpy’nut, the only existing complete and ready-to-use product intended to treat severe malnutrition, on a preventive basis. In 2007 and 2008, we distributed a supplemental RUF, Plumpy'doz, a food supplement designed especially for preventive use, to approximately 60,000 children in Niger. The children continued to eat family meals and Plumpy’doz provided the components missing from their diet (milk, vitamins and minerals).

Those results were also very positive. For the first time in six years, malnutrition failed to spike in the area targeted by the distributions. The number of severely malnourished children admitted into our treatment program fell, as did the proportion of those who required hospitalization.

Beyond MSF, events are also moving in a positive direction. In late 2008, UNICEF and the World Food Program (WFP) announced that they would distribute Plumpy'doz in Somalia, Burkina Faso, Afghanistan, and Madagascar.

What are the obstacles to larger-scale preventive distributions of nutritional supplements?

First, the countries most affected by malnutrition must adopt the new strategies. When there was no way to tackle malnutrition effectively, the reflex among some was to hide this public health problem. Today, distributing preventive nutritional supplements offers a more acceptable alternative that is more tenable than treating, year after year, huge numbers of severely undernourished children.

The issue of financing these new strategies remains. The cost of nutritional supplements will certainly fall, but reducing them will be difficult given the cost of the raw materials. Increased funding in the area of malnutrition – which remains quite low – is thus critical. International donors must acknowledge the extent of the problem and release adequate funds. This is not insurmountable. It has already happened with other diseases, like tuberculosis, AIDS and malaria, specifically through the Global Fund.