"My Mother...Could Not Flee": Conflict's Impact on the Population in Eastern DRC

Without health resources, people living in North and South Kivu are struggling to survive omnipresent violence and fear. 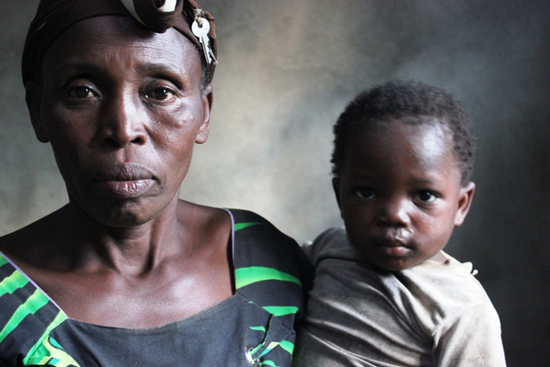 The population of the Kivu provinces in the east of the Democratic Republic of Congo is fighting to survive, not only against the bullets flying in the latest peak of this long-running conflict but also against the vacuum of infrastructure and health resources.

People living in North and South Kivu provinces in eastern Democratic Republic of Congo (DRC) are struggling to survive in an environment in which violence and fear are omnipresent but basic infrastructure and medical resources are all but non-existent.

Since April 2012, Doctors Without Borders/Médecins Sans Frontières (MSF) has treated more than 200 people wounded during clashes between armed groups. Yet the number of patients admitted with bullet wounds or machete cuts only hints at the impact this conflict is having on the health and well-being of people in this troubled region.

“We fled our village Sunday, a week ago. On that day the attackers arrived in our village. If a house had a roof of metal, they threw gasoline in the house to make it burn. If the roof was made of leaves or grass, they threw fire on the house and burned the people inside.

I hid with my children in the bush while they were burning our house. My sister-in-law, brother-in-law, and mother-in-law were burned alive in their house.”
—Woman (30) with four children who fled an attack on her village in South Kivu in May 2012

Over the past few months, many families have been forced to flee to refugee camps and transit centers because they fear being attacked during the night in their homes. They travel along the roads carrying their mattresses and other possessions with them, leaving behind silent villages that previously teemed with life. Gone are the chickens pecking at spilled grain, the children napping in the shade, the women selling fried sweet potatoes and boiled corn on the side of the road.

Thousands of displaced people live with host families, strangers who share their homes and their food with those on the run. Many more hide in the forest, taking shelter under plastic sheeting that they cover with leaves, so they’re not visible from a distance. These people rarely factor into the official counts because they’re not registered in an established location for the displaced.

“I left my village with my family at the beginning of the fighting. On Wednesday, having no food, I returned with some friends to my field to harvest vegetables. We heard weapons fire, and during the shooting a bullet lodged in my left arm. I returned with my friends who were not wounded to the village where they made a stretcher out of branches to carry me to the main road where we then able to find a motorcycle to the next town. We waited until the next day to come to the hospital because we did not want to travel at night.”
—Man (28) with three children, North Kivu, May 2012

In a growing number of cases at MSF facilities, patients have arrived in critical condition because they’d put off coming in due to the heightened threat of violence or extortion while travelling. As an MSF nurse at North Kivu’s Mweso hospital recounted this past April: “A woman began miscarrying late at night. The bleeding was severe. But with all of the military and armed groups on the roads, her family was too scared to travel during the night, so they waited until the morning to walk the few hours to our hospital. She arrived at noon. By then she had lost too much blood and there was very little we could do. She died within minutes of arriving.”

Another woman was attacked and raped by a group of armed men while walking to the hospital with her sick child. When she finally arrived, she was in more urgent need of medical care than her child was.

In some places, MSF has seen a huge increase in patients—by more than 40 percent at one health center—because the fighting has pushed people into the area. In other places, we see a decrease in patient numbers because they have fled or are in hiding.

In spite of the verdant, fertile surroundings, the weakest and most vulnerable are susceptible to malnutrition because people are also too scared to harvest crops or go to the market. “I arrived today at the hospital with my daughter who is suffering from severe malnutrition,” said the mother of a four-year-old patient in an MSF feeding center in North Kivu. “We live in a village three hours walk from here. Because of the insecurity over these last few weeks, we no longer sleep in our house but [rather] in the fields or in the bush. During the night, bandits attack the village and during the day there are military clashes. It is difficult to find food with the bullets flying and preventing us from going to the fields.”

“Last month my parents’ village was attacked, and they tried to run but my mother was too unfit and could not flee. They cut her with a machete and killed her. My father ran but he was shot and killed. In that village, they counted 11 people killed with machetes but there were many others burned in their houses and they could no longer count the bodies.”
—Woman, 30, who fled an attack on her village in North Kivu, May 2012, with four of her children. Her husband and one child are missing.

MSF is treating people who have been mistaken for combatants and attacked with machetes or shot. Patients and staff tell of relatives who have been abducted and forced by armed groups to carry supplies and pillaged items.

The current peak in instability in North and South Kivu is part of an ongoing cycle of violence in eastern DRC that continues to have severe health and humanitarian consequences for people living in the area. It shows no sign of abating, and residents in the area seem to have as much to fear from the future as the present.

“Last Sunday, we heard gunshots in the village so the people all took shelter in their houses,” said a mother of five. “My little girl was the last to hide because, with the crowds, it was difficult to enter the house. She was shot in the thigh. She cried and screamed a lot. We brought her to the health center, where she stayed one day. Then, on Tuesday, we brought her to the hospital by motorcycle.”

Her family was unable to bring food or clothes with them and armed men harassed them along the way. “My biggest fear is for my children,” she said, “and for what will happen to them if the war continues.”