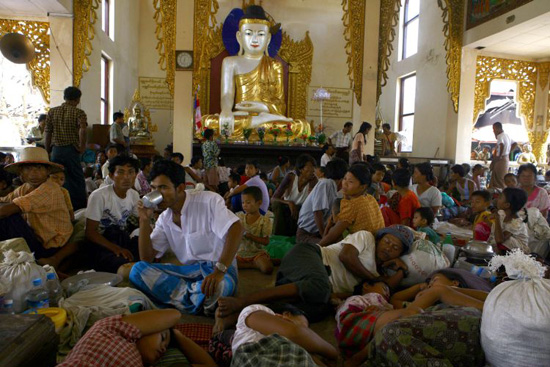 Cyclone Nargis survivors sit at a temple turned into a makeshift refugee center in the town of Labutta, in Irrawaddy Division.

“Confronted by a woman who could not find the will to eat provided me with just a glimpse of the desolation that thousands of people in the worst affected areas are suffering.”

The need for clean water, food, shelter and medical assistance remain critical in the Irrawaddy Delta in Myanmar. More than one month later, Doctors Without Borders/Médecins Sans Frontières (MSF) continues to come across people who have received no assistance. While the necessity of an immediate increase in emergency aid remains paramount, another issue has become increasingly apparent in the populations whom MSF assists—a significant level of psycho-social trauma.

In June, MSF Mental Health Advisor Kaz de Jong traveled to the Delta to assess the situation. On his return he described a worrying scenario, in which some of the worst affected communities continue to want for assistance, while others cannot imagine how to begin dealing with rebuilding amid the destruction.

“Confronted by a woman who could not find the will to eat provided me with just a glimpse of the desolation that thousands of people in the worst affected areas are suffering,” says de Jong. “She explained that she was thankful for the food being delivered but asked if we could also find her the motivation to eat it.” 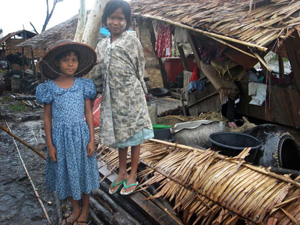 With generations wiped out, families torn apart and whole villages destroyed, the level of distress is extensive. “When you approach a community you can see the level of loss mirrored in people’s faces and responses,” says de Jong. “Those who have been lesser affected, having undergone around a 20 percent loss which is in itself unimaginable, are utilizing their natural coping mechanisms; they are active in coming together to care for each other and organize the community. However, those who live in areas that have been more heavily affected stare at you with empty faces, the natural coping mechanisms obliterated and communities broken apart.”

In addition to the huge losses and want of basic needs, de Jong explains, some of the less obvious challenges people are also facing. He heard many stories from people who say they feel fearful, for reasons including; returning to the places where they experienced such horror or encountering one of the numerous dead bodies being unearthed by the ongoing rains.

Another less recognized issue is the change in role that the circumstances have forced upon so many of the affected population. This was exemplified for de Jong when he encountered a grandmother grasping a small child, “I’ve become a mother again—my whole family is gone—the only ones left are myself and this baby girl.”

In this context, MSF medical staff has recorded a growing number of psycho-social complaints; lethargy, profound sadness, depression, anxiety, difficulty sleeping, hyper-tension, palpitations, and non-specific body complaints. To address the issue, MSF is now integrating a mental health and psycho-social program into our emergency response efforts in the areas of Labutta and Hangyi, where teams deliver food, water and sanitation, shelter and primary health care. 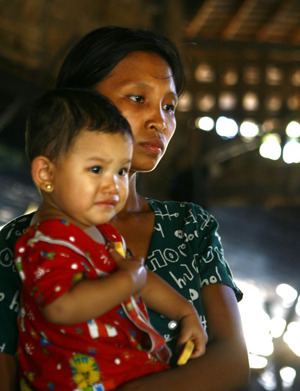 Survivor Kai Mawi, 24, and her daughter Danisa stand at a shelter in the village of Kamingo, at the Irrawaddy Division. Kai Mawi lost her entire family in the storm.

“An integrated approach is important in order to address all of the critical issues—people’s recovery environment and personal mental health and well being,” says de Jong. “A team of community health workers, trained in case detection and referral, will work to raise awareness of key issues such as stress and hygiene and the facilities put in place to assist people within the communities. They will work together with our experienced health teams and counselors (provided with additional training in trauma care) who will provide in-depth psychosocial and mental health support. The counselors are nationals who have been recruited from our longer standing MSF projects based in Myanmar.”

Other efforts will see MSF working to mobilize communities to strengthen their self-help structures and develop support groups and activities. Plans are in place to expand services to assist those who remain as yet unaided.

MSF national staff, who began working on the ground in the Delta just 48 hours after the incident began, are also being given the appropriate support and care. The conditions in which they are working are physically very hard, the rainy season, basic hygiene and living situation contribute to the challenges the staff has to endure, with deep mud making movement difficult. That is in addition to the huge emotional strain of encountering so much suffering and in some cases baring their own losses.

However, de Jong reports a strong sense of motivation within the staff to go on assisting people, most of whom have chosen to go on working in the Delta region.