MSF now has more than 250 staff on the ground in Myanmar's Irrawaddy Delta, with a total of 33 medical teams. MSF teams have reached around 120,000 people to provide medical and relief assistance. These teams have distributed at least 310 metric tons of rice, more than 84,000 cans of fish, 16,500 liters of cooking oil, and 13,500 plastic sheets for building shelters.

Doctors Without Borders/Médecins Sans Frontières (MSF) now has more than 250 staff on the ground in Myanmar's Irrawaddy Delta, with a total of 33 medical teams. MSF teams have reached around 120,000 people to provide medical and relief assistance. These teams have distributed at least 310 metric tons of rice, more than 84,000 cans of fish, 16,500 liters of cooking oil, and 13,500 plastic sheets for building shelters. 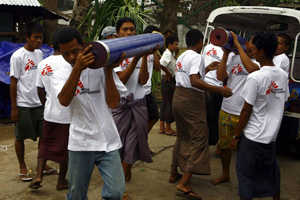 MSF teams are traveling to villages affected by the cyclone and identifying appropriate locations to directly distribute relief supplies to people. The village chiefs and religious leaders are often present to oversee these distributions.

In the first week, the teams provided first aid and distributed some locally purchased relief supplies. to many villages in the Delta. The next step was to revisit the villages distributing accurate family rations of supplies. However, lists of the population only exist where people are still in their home villages, and not where displaced people have congregated in schools and monasteries. MSF teams are conducting surveys among the displaced population to assess the level of need. 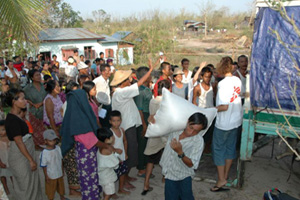 The teams are distributing plastic sheeting, food, mosquito nets, and water containers to people, according to the needs of the population. The teams are concentrating on the provision of clean water where there are no existing sources. This is often through the distribution of washbasins, water containers, and plastic sheeting to collect rainwater. People are also asking for more shelter materials, salt, and clothing.

In the south of the Delta, the entire population has been affected so it has been necessary to distribute large quantities of supplies. In the larger towns that suffered less damage most of the relief effort is concentrated on the camps of displaced people. Most people who have lost their homes have now congregated in schools and monasteries. 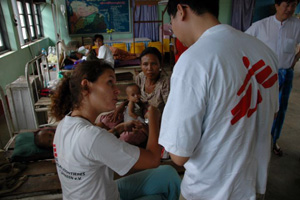 On average MSF teams are seeing around 500 patients each day. Many of the consultations are still injuries as a result of the storm, such as bone fractures, head wounds, and infected wounds.  Medical staff members have also treated people with wounds similar to burns, which are actually the result of having sandy rain lashed at their skin by winds reaching 120 miles per hour.

Almost three weeks after the cyclone, people are seeking care predominantly for fever, respiratory tract infections, and diarrhea. Referral cases are sent back to Pathein Hospital.

MSF counseling staff members are consulting with many people in the Delta who are suffering from severe mental stress as a result of the disaster. Many people are in a high state of confusion, some cannot show any emotion, and others refuse to accept that their families are dead.

MSF national staff are being sent to the Delta region from our other projects around the country. National staff have shown tremendous dedication and have helped huge numbers of people through medical treatment and distribution of aid in extremely physically and emotionally difficult circumstances.