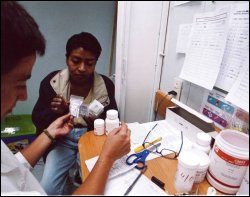 Geneva/New York, 11 March 2005 - Following the recent passage in Guatemala of Decree 31-88 and the US-Dominican Republic-Central American Free Trade Agreement (DR-CAFTA), the international medical humanitarian organization Doctors Without Borders/Médecins Sans Frontières (MSF) reiterated its concerns about their devastating impact on access to essential medicines in Guatemala and throughout the region.

"We fear that our ability to ensure sustainable access to treatment for our patients, particularly people with HIV/AIDS, will be severely affected," said Dr. Karim Laouabdia, Director of MSF's Campaign for Access to Essential Medicines.

According to the World Health Organization (WHO) and UNAIDS, as many as 13,500 people living with HIV/AIDS are in urgent clinical need of ARV treatment while only 3,600 Guatemalans receive it -1,600 of whom are treated by MSF in hospitals and clinics in Guatemala City, Coatepeque, and Puerto Barrios.

MSF has been providing antiretrovirals (ARVs) to Guatemalans since 2001. Most ARVs are not patent protected in Guatemala, and generic competition has brought down the prices of AIDS medicines, a fact which enables more and more patients to access treatment. The majority of patients in MSF's treatment programs are prescribed generic ARVs, whereas Guatemala's social security system has spent 20 times more for some originator "brand name" drugs. For example, MSF pays US$216 per person per year for the generic version of AZT+3TC, an important component of triple combination ARV therapy, while Guatemala's social security system spends US$4,818 per person per year for the same combination from GlaxoSmithKline.

"Paying more money for the exact same medicines means treating fewer people and, in effect, sentencing the rest to death," said Dr. Laouabdia. "We are especially worried that Decree 31-88 and intellectual property provisions in DR-CAFTA could make newer medicines unaffordable - our patients will need these in order to stay alive once their first-line regimen fails."

Decree 31-88 requires that pharmaceutical test data be kept secret for a minimum of five years, giving a de facto market monopoly to originator "brand-name" drug manufactures, and possibly delay the availability of generic medicines even in cases where the originator drug is not marketed in Guatemala. MSF fears that drug prices will, as a result, be unaffordable to the vast majority of Guatemalans. The repeal of a similar measure by the Guatemalan government in December 2004 prompted US officials to publicly pressure Guatemalan authorities and threaten to delay ratification of DR-CAFTA in the US.

DR-CAFTA also includes a "data exclusivity" provision, among other harmful intellectual property measures, all of which go far beyond what is required in the World Trade Organization (WTO) Agreement on Trade-related Aspects of Intellectual Property Rights (TRIPS), and directly contradict the WTO Ministerial Declaration on the TRIPS Agreement and Public Health (Doha Declaration).

"There is no reason that Guatemala should not be able to ensure universal access to ARV treatment, particularly because of a US$ 41 million grant from the Global Fund to Fight AIDS, Tuberculosis and Malaria," said Ellen 't Hoen, director of policy advocacy for MSF's Campaign for Access to Essential Medicines. "But with Decree 31-88 and intellectual property provisions in DR-CAFTA, only a fraction of those in need may be treated. Instead of ensuring access to affordable medicines for all Guatemalans, the Congress has apparently chosen to protect the interests of large multinational pharmaceutical companies. This is simply unacceptable."