New Wave of Displaced and Wounded in North Kivu 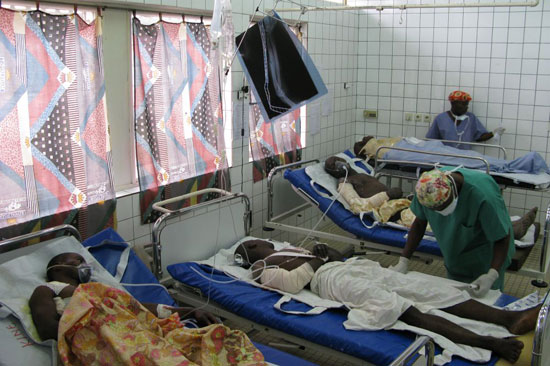 Patients in the MSF-supported hospital in Rutshuru.

Since fighting broke out in and around the town of Kiwanja in the North Kivu region of the Democratic Republic of Congo on November 5th and 6th, Doctors Without Borders/Médecins Sans Frontières (MSF) surgical teams have treated dozens of wounded people in the MSF-supported hospital in the neighboring town of Rutshuru. Half of the wounded are children. Thousands of people who have fled the fighting in Kiwanja have sought shelter on the road between the two towns, in churches, and even inside Rutshuru hospital.

MSF teams are continuing their work in the regional capital, Goma, and in other towns and villages in North Kivu. The organization remains very concerned about the many people still on the move after fleeing recent fighting.

Heavy fighting continued today in Rutshuru and in Kiwanja, and the situation remains tense. Thousands of people have been displaced yet again by the fighting. An MSF mobile clinic team that attempted to go to Kiwanja today was turned back by fighting.

Rutshuru hospital is full of displaced people, and MSF has set up tents to shelter them. Over the last two days, medical teams have treated 43 war-wounded patients at the hospital, and more are arriving. Since yesterday, MSF has also treated more than 50 patients at two health centers in Rutshuru, half of them children. MSF is the only organization currently working in the town.

There was fighting in Kibati today as well, sending displaced people fleeing to nearby Goma. MSF teams were there running mobile clinics, providing clean water, and installing a new cholera treatment center in Kibati.

Ten cholera patients fled a treatment facility in Kibati when the fighting broke out, and MSF was able to transfer another 10 patients back to the cholera treatment center at the Goma General Hospital. Tomorrow, MSF teams will set up an ambulance service to transport cholera patients to Goma while the situation in and around Kibati remains unstable.

West of Goma, MSF teams are starting mobile clinics in the Mushake area, and in Karuba village. MSF is providing mental healthcare to displaced people in Shasha camp, near Saké. Further south, in Kirotshe, the organization will provide surgical and emergency support at the local hospital.

In Minova, also west of Goma, an MSF team continues supporting a cholera treatment center, where an average of 50 new patients are being treated each week.

While some displaced people are returning to their places of origin around North Kivu, many of the displaced and local residents continue to be in urgent need of food, clean water, healthcare, and basic items like blankets and shelter materials.

The situation is relatively calm north of Goma, Kitchanga, and Mweso, where MSF is providing primary and secondary healthcare and running mobile clinics. In Masisi, 80 km northwest of Goma, a six-person MSF international team and 80 Congolese colleagues are providing healthcare at a hospital and health center.

Further east, along the border with Uganda, MSF teams are assessing the condition of thousands of Congolese refugees and displaced people.

MSF is continuing to explore the area as security conditions permit and is identifying displaced people with unmet health needs. Some 52 international staff are working with MSF in North Kivu now, including doctors, nurses, logisticians, and administrators, among others.