Niger: Between Two Seasons of Hunger

Despite an aggressive response to the nutritional crisis in Niger by MSF and other organizations, tens of thousands of children suffered from malnutrition in 2010. 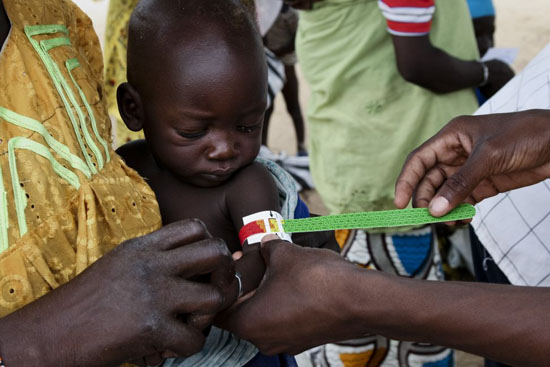 A child's arm is measured to test for malnutrition at an MSF program in Zinder.

Salouf Kina is 80 years old. A century ago, his father founded the small village of Gueza, which is now a three hour drive from the town of Zinder, in eastern Niger. “He was taking his cows to a new grazing ground and decided to settle here with his family,” Kina said late last year, his voice faltering at times. “There was plenty of greenery and water here at the time. I've always lived here, but this year [2010] is the worst I've seen.”

Today, Gueza's 2,000 inhabitants live in a patchwork of mud huts situated along sandy streets. The few trees provide what little shade there is. The scrubby fields of millet left over from the recent harvest give the hills in the surrounding area an air of neglect.

According to Kina's son, Abukar, a neighborhood chief and one of the village wise men, Gueza’s inhabitants suffered through a terribly lean year. “At the end of 2009, the harvests were very bad, and some families harvested nothing at all because of the drought,” he explained. “When people's stocks ran out and they could no longer borrow, they had to leave the village to go and work in Nigeria—young men first, then whole families. Between May and September, more than half of the village fled, leaving behind only women, young children, and the elderly.”

As hunger took hold, MSF set up a therapeutic feeding program (also known as outpatient nutrition education and rehabilitation center, or CRENI) for cases of severe malnutrition in Gueza's Integrated Health Center, one of the only concrete buildings in the village. Abukar, for one, said it was desperately needed. "We're a long way from everything, and few people are interested in us. If MSF hadn't set up a feeding center at the health center, all of us would have left and the village might have died completely."

Mamane Bahir, the center's manager, explained the context of the program: "The rains came very early this year, and the malnutrition situation was exacerbated by malaria, which hit the weakest children." It was clear, Bahir said, that conditions had gotten much worse than they'd been just 12 months earlier: "Last August, we treated around 600 children, compared with just 100 or so in August 2009.”

This past August and September, at the height of the nutritional crisis, MSF's intensive hospitalization centers, the CRENIs, in Zinder and the village of Magaria to the south had more than 800 beds available for children who needed treatment. Additionally, MSF was running ambulatory therapeutic feeding centers in both areas.

The facilities allowed MSF to reach a large number of children who needed care. In Zinder, for instance, MSF treated 4,300 children suffering from severe or acute malnutrition in 2010. MSF teams in Zinder also distributed more than 112,000 supplementary food rations to children between the ages of six months and three years, children who were either moderately malnourished or at risk of becoming so. And in Magaria, the MSF ambultatory therapeutic feeding centers provided care and treatment to 21,450 children under the age of 5, while more than 6,200 children in need of intensive care were treated at the CRENI in the area.

Kelima, 32, took Djamilou, the youngest of her four children, to the Zinder hospitalization center in early December. Only 15 months old, he had lost a significant amount of weight. The MSF doctor diagnosed him with severe anemia combined with malaria, put him on a drip, and fed him therapeutic foods. Gradually, he gained back the weight he’d lost. Two weeks later, he was smiling and waving his hands when he was spoken to. “Soon we'll be able to go back to the village,” explained Kelima, who was clearly relieved by the improvements in his condition. Still, though, she was worried about the future. “This year, it was really too difficult to feed the children,” she said. “There were only a few handfuls of millet for the whole family.”

“Unfortunately, 2010 was the year that broke every record,” said Dr. Moïse Moussa Gabrial, the head of the intensive hospitalization center in Magaria. “Since January 2010, we've seen more than 6,200 children. At the end of August, we had around 500 hospitalized children [in Magaria]. We had planned to recruit and train medical staff, but the situation was so bad that we had to hire people locally and train them on the job.”

“At the height of the malnutrition crisis, 280 people were working for MSF at the center,” he continued. “And tragically, we saw the deaths of many children—133 in September alone—who had arrived in a desperate nutritional state and were often suffering from malaria.”

Even as it was a time of terrible trials, 2010 also saw an unprecedented mobilization of resources directed toward fighting severe malnutrition in Niger. The government that had taken over after a coup d'état at the beginning of the year made food security one of its central priorities, calling upon international organizations to help. A host of groups, including MSF, provided extensive support for care facilities and implemented large-scale prevention strategies using appropriate food supplements, making it possible to limit the damage.

“We dare not imagine what would have happened if no one had rallied to help,” said Patrick Barbier, MSF's Head of Mission in Niger. “But what worries us today is that despite some good harvests at the end of 2010, 2011 still risks being a very difficult year, in a context which remains one of extreme poverty, often combined with a lack of access to care. In nearly all the country's regions, families are heavily in debt and must now, after the harvest, pay back three or four measures of millet for every two borrowed. Added to which, many families’ livestock assets have been reduced from a whole herd at the start of the year to just a few goats and sheep. International organizations and aid agencies must remain extremely vigilant and prepare to intervene on a large scale again in 2011.”

In Gueza, Salouf Kina's grandson, Abukar's son, has just turned 20. He already has the serious face of an old man. He was planning to set off for Nigeria to sell tea in the street, hoping he can send back money to help his family survive in the village—and further hoping that the village itself can survive.