"Unfortunately, we are witnessing recurrent crises that vary only by intensity from year to year." 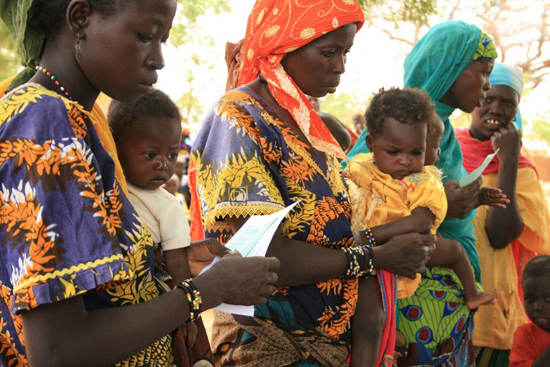 Mothers wait to receive ready-to-use therapeutic food at a nutrition program in the district of Guidan Roumdji.

Dr. Marie-Pierre Allié, president of Doctors Without Borders/Médecins Sans Frontières (MSF), returned recently from a trip to Niger. With another nutritional emergency underway, new preventive approaches are emerging in the struggle against malnutrition.

What is your analysis of the situation?

The most recent data on the country's nutritional situation showed that rates of childhood malnutrition are above the emergency threshold of 15 percent in many regions of the southern part. In certain areas, such as Maradi, where we work, one child out of five is suffering from acute malnutrition. And four percent of children under 5 [years of age] suffer from the most severe form of malnutrition.

Some people describe this as a "famine," saying that this is a "crisis of previously unheard-of proportions." Is that true?

It would be counter-productive to exaggerate. We should be careful about our choice of language. We don't have to go to extremes to dramatize the situation in order to emphasize that this is a serious situation, nutritional indicators are alarming, and an appropriate response must be organized. Furthermore, we should also put the current situation in perspective with respect to recent years. Although the crisis of 2010 is certainly more serious, it is not radically different than those the country has experienced in the last few years. Unfortunately, we are witnessing recurrent crises that vary only by intensity from year to year.

Therefore, the key is not to rank them by severity?which would also be extremely complex?but, rather, to emphasize their periodic occurrence.

Yes, in terms of the breadth and quality of the response. Both have changed dramatically since 2005. At that time, response was slow, both because the regime in power was unwilling to acknowledge the problem and because of the lack of effective warning and response mechanisms. MSF sounded the alarm, calling for deployment of international aid and the adoption of new treatment protocols.

At that time, we heard a lot of talk about "ready-to-use therapeutic foods."

That was the first time these new products had been used on a large scale, allowing us to treat cases of severe malnutrition on an outpatient basis. Thanks to this strategy, MSF's sections managed to treat 63,000 malnourished children. It had previously been impossible to treat such a large number of children because of the burden (volume and cost) their hospitalization would have represented. Since that time, Nigerien health authorities have adopted these new strategies for treating severe malnutrition, thus increasing the number of children who can be treated.

However, Nigerien authorities seem to have been less open concerning nutritional issues after 2005.

Yes, there's a certain paradox. President Tandja chose to deny the seriousness of the situation and the significance of the stakes involved in responding appropriately. In 2008, the French section of MSF was forced to leave the country.

However, some important changes did occur, including new protocols for treating malnutrition, free medical care for children under five, the adoption of new standards for defining severe malnutrition (recommended by the World Health Organization) and, last, local production of ready-to-use therapeutic foods.

What measures have been adopted to address the crisis of 2010?

The new Nigerien authorities began alerting the international community to the seriousness of the situation in March. They organized sales of cereal at low prices and free food distributions. The response plan should also make it possible to treat more than 300,000 severely malnourished children in the country, which is four times more than in 2005.

In addition, we should emphasize that widespread preventive measures are also part of this approach, including the distribution of complementary foods intended for infants, who constitute the most vulnerable populations.

Is the response meeting the needs?

What we can say for sure is that the response is ambitious and will certainly make it possible to save many children. The response plan has evolved as the situation has changed. Unfortunately, it did not target immediately the areas most affected by childhood malnutrition but instead, gave priority to areas experiencing agricultural production deficits. Here again, the issue is emergency response, which requires considerable resources to treat children who are already severely malnourished. The malnutrition prevention measures that have been implemented are a good way to begin moving beyond this approach and to respond sooner.

It will be particularly important to make sure that these measures are maintained after the most difficult period winds up and that they are implemented systematically to prevent the recurrent peaks in severe malnutrition that we see every year, from June to October.

What role is MSF playing in this context?

MSF teams are working in the regions that have been the most seriously affected by the crisis: Tahoua, Maradi, Zinder and Agadez. We have strengthened our treatment programs to face the crisis and are now managing 8 nutritional hospitalization centers and approximately 60 outpatient centers, working in conjunction with the Nigerien Ministry of Health. Since January, we have treated approximately 65,000 children and expect to treat a total of 150,000 this year.

We are also organizing supplemental food distributions for children from six months up to two years, in the areas where we are working. This should allow us to reduce significantly the number of malnourished children during the second part of the season. We also hope to continue these distributions beyond the crisis period, to get ahead of the ?hunger gap? of 2011.

MSF's French section has returned to Niger. What does that mean?

It signals the common willingness for both Nigerien authorities and MSF to resume our joint efforts to address the pediatric and nutritional problems in that country. To do that, we are working with a Nigerien medical NGO, Forsani. We had decided to support the organization after we left in late 2008. In 2009, more than 12,600 severely malnourished children were treated under the joint program in Madarounfa.

We hope to develop sustainable treatment and preventive programs by working with these young Nigerien doctors, health authorities and other aid actors.