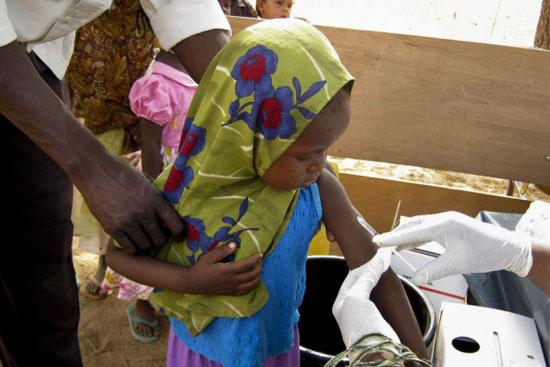 A child is immunized against meningococcal meningitis during a mass vaccination campaign in April.

Nearly 400,000 children and young adults were vaccinated against meningococcal meningitis in the areas of Zinder, Maradi, and Madaoua when Doctors Without Borders/Médecins Sans Frontières (MSF) supported the ministry of health during a vaccination campaign that ran from April 13 to 25.

A drastic rise in meningitis cases reported by the authorities in these regions resulted in the timely decision by the ministry of health to launch the mass vaccination campaign. An agreement with the International Coordinating Group (ICG) on vaccine provision for epidemic meningitis control enabled the swift acquisition of enough doses to vaccinate 400,000 people in Niger. MSF responded to a request by the health authorities to assist with the logistics and organization of the campaign. MSF also supported the medical treatment of people already affected by the disease by installing isolation units in referral hospitals.

Meningococcal meningitis is a bacterial form of meningitis, a serious infection of the thin lining that surrounds the brain and spinal cord. Bacteria are transmitted between humans through droplets of respiratory secretions when people come into close contact. The most common symptoms are a stiff neck, high fever, sensitivity to light, headaches and vomiting. If left untreated, meningococcal meningitis is fatal in approximately 50 percent of cases.

The serotype of the meningococcal strain responsible for this year’s meningitis epidemic is W135, as opposed to the A and C strains which caused a massive outbreak in West Africa last year. In 2009, approximately 3 million people in Niger were vaccinated against the A and C strains with the support of MSF.

“This new vaccine offers protection from the meningitis strains A, C, and W135 for the next 3 years,” said Clara Delacre, MSF’s vaccination coordinator for the region of Maradi and Madaoua. “We administer vaccinations free of charge to people aged from 2 to 30 years old.”

Niger is located inside the meningitis belt, which stretches from Senegal to Ethiopia and has the highest rates of the deadly disease worldwide.