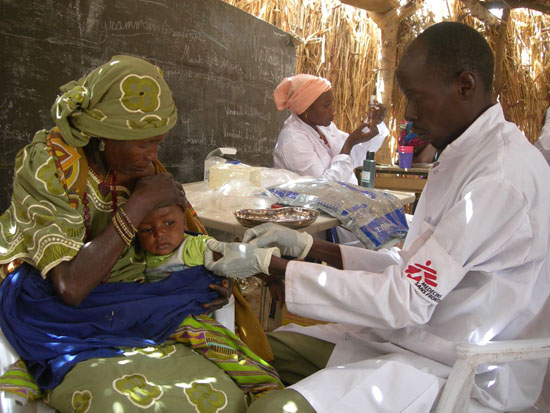 MSF staff vaccinates a baby against measles at a clinic in Magaria district.

Since January, thousands of children have developed measles in Niger. MSF has sent medical teams to Maradi and Zinder, the regions with the highest numbers of measles cases, to prevent the spread of this highly contagious disease.

In December 2007, measles cases started to be reported in these two regions. During the month of January, government health authorities vaccinated children between nine months and five years of age. However, an increasing number of children have become infected with measles—2,200 cases were recorded nationally between January 1 and March 23. To prevent the disease, MSF teams are vaccinating children between six months and 15 years of age. A total of 278,000 children have been vaccinated by MSF, to date.

In Zinder, a decentralized strategy

In Zinder region, MSF teams have set up a surveillance system, trained medical personnel, and launched an awareness campaign on national radio stations.

Since March 26, 42,000 children between the ages of six months and 15 years have been vaccinated within a 15-kilometer (10-mile) radius of the town of Magaria on the Nigerian border. The region is rural with a highly dispersed population, so MSF has adopted a decentralized strategy with mobile teams travelling to outlying villages. This strategy allows children to be vaccinated directly in their villages, improving the vaccination coverage rate and allowing quicker detection of people with the disease.

Around 20 children with measles are being diagnosed every day. Children with measles must be isolated, due to the high risk of contagion, and receive treatment for lack of vitamin A, ocular complications, stomatitis (a viral mouth infection), dehydration, and protein deficiencies. Some may need to receive specific treatment for fever, diarrhea, malnutrition, and sepsis.

Of the 2,200 cases reported since the beginning of the year, 946 were registered in the Maradi region, which includes Maradi Commune, Guidam Roumji, and Madarounfa.

Niger has one of the worst rates of chronic and acute childhood malnutrition in the world. MSF runs nutritional programs in several locations, including: the regions of Maradi, in Maradi town, Guidan Roumdji, and Dakoro; Zinder, in Zinder town and Magaria; and Tahoua, in Madoua et Bouza. When malnutrition and measles are combined, it is extremely serious for young children. Malnutrition weakens the immune response and leaves children more vulnerable to infectious diseases such as measles, and children with measles are more susceptible to malnutrition. It is therefore essential to protect children against measles in Niger. MSF has initiated massive vaccination campaigns to prevent the disease from spreading any further.