In Niger, MSF is working with communities to identify and treat childhood malnutrition earlier. 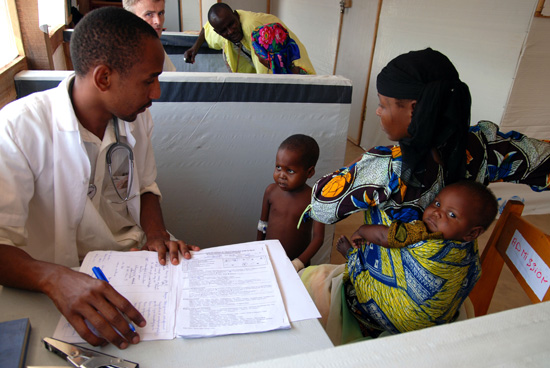 A mother who has brought her two small children to see the MSF team.

In Magaria, a town just steps away from Niger’s border with Nigeria, the hospital’s intensive therapeutic feeding center (ITFC) is nearly overloaded; already 240 children have been hospitalized. “Treating such a large number of children, who often arrive in a desperate state, is an almost impossible task under good conditions,” says Dr. Claude Ngobe, Doctors Without Borders/Médecins Sans Frontierés (MSF) medical coordinator for Niger. “We have to step up the early detection of malnourished children so that we can prevent admitting so many to the hospital.”

In one of the district’s health zones, MSF is trying to do just that by working closely with the community to prevent the disastrous consequences of malnutrition in young children.

On a recent morning, Yaou Dodo, the young leader of the village of Bakadougou, welcomed an MSF team to his village. He hurriedly set out a few mats from the nearby mosque and invited Amadou Roufai, the Nigerien supervisor of the community project, and Renata Oliveira Silva, an MSF nurse from Brazil, to sit in the shade of a mango tree. Soon a crowd of children, along with mostly older men and women, gathered around the group.

The small MSF team had left Magaria early that morning. Before arriving in Bakadougou, they had stopped in Dan Tchiao, the largest village in a health zone that is home to nearly 55,000 people, to deliver several boxes of “plumpy nut” ready-to-use therapeutic food to an ambulatory therapeutic feeding center—one of many tools MSF uses in the treatment of malnutrition. The rains had yet to render the roads impassable, so the all-terrain vehicle easily maneuvered between clusters of round huts.

“Everyone Must Know That Treatment is Free”

The early detection visits like the one in Bakadougou are important for the team’s effort to determine if any children in the village are malnourished. Before examining a group of village children, though, they identify and recruit community workers from the village. “You will be responsible for warning mothers when one of their children shows signs of malnutrition,” Roufai told the candidates, two young men and one woman. “You will see to it that mothers go to the health post. Everyone must know that treatment there is free for children under five, and mothers will be able to find medicines there.”

MSF is committed to ensuring the supply of essential medicines to all health care facilities in the zone where it is working in order to make sure that care for children under five remains free. However, there are many difficulties involved in the provision of this care, including the lack of trained and paid health workers, the lack of medicines, and the underutilization of health services. A recent study revealed that out of every ten children who die before reaching their fifth birthday, eight die at home. One out of three children had never been brought to a clinic.

MSF’s ability to make medicines available at no cost to the patients will be one of the keys to the project’s success, but not the only one. “While it’s important to persuade mothers to come to the health post, they have to be sure to find solutions to their problems there,” explained Renata. “And that means having trained workers and medicines at the health posts. Otherwise, the mothers will get discouraged. We’re going to be able to demonstrate the effectiveness of these measures.” The population needs to see that children are being seen and treated, that their condition can improve, and that seeking out treatment when it is needed is worthwhile.

The Granaries Are Empty

After scheduling training sessions for the future community workers, everyone headed to the health post, a small, two-room building that MSF recently renovated. It is located on the edge of the village, and the team had to step over shoots of millet that the rains are beginning to turn green.

Two mothers were waiting with feverish children, one of them already severely malnourished. The young mother explained that in their village, a few kilometers away, the granaries are empty. The men have only just returned from Nigeria, where they had been working since the last meager harvest (and where most men go annually after the harvest season). Now they are in the fields, but it will be September before the next ears of millet and sorghum mature. While the rains of July and August are regular, a ‘tia’ of millet— approximately 2.5 kilograms, or 5 pounds—costs not quite one euro. And any earnings the men brought back from Nigeria are quickly drained.

One of the children could be treated with the medicines the team brought with them. But the other “has to be admitted to the feeding program at Dan Tchiao today,” said Renata. “If we don’t take refer or transfer him, either he will have to be hospitalized in Magaria, or he could die. We have to explain to the mother.” Luckily, the mother readily agreed to climb into the truck with her young child and his older brother.

The team returned to Magaria in the early afternoon after making a few more stops and recruiting a few more community health workers.  A driving rain had begun to fall, “the third of the year,” says Amadou. In one village, another severely malnourished child had to be rushed to the hospital’s intensive feeding center. Elsewhere, two children, including the one from Bakadougou, were taken to the Dan Tchiao Integrated Health Center to be treated in its ATFC. “Of the 7,000 children under five in this health zone," Renata said, "we expect nearly 800 of them to be affected by malnutrition during the time between harvests,” the time commonly known as the "hunger gap." She added that she felt optimistic about the impact of the work in the surrounding communities “With our work in the villages, there will certainly be fewer this year. You’ll see. Working with the community works. I’ve seen it before at home in Amazonia. Why not now in Niger!”

Some of her optimism seems justified. Nearly 100 community workers have been almost fully trained, and more children are coming to get treatment at the ITFC in Magaria from health zones other than Dan Tchiao. These are encouraging signs in a difficult situation.