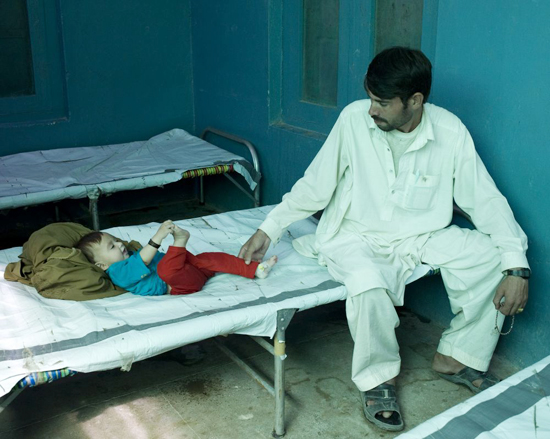 A father and his child during a quieter moment at the MSF-supported hospital in Timurgara.

Following an explosion in the Lower Dir district of Pakistan’s North West Frontier Province on Monday, doctors and medical staff from the medical organization Doctors Without Borders/Médecins Sans Frontières (MSF) and Pakistan’s Ministry of Health treated 88 injured people, most of whom were seriously wounded in the blast.

The explosion took place in the town of Timurgara, roughly 600 meters from the District Head Quarter (DHQ) hospital, which MSF has been supporting. One of the priorities has been to help the hospital improve its capacity to respond to incidents that create mass casualties. In this case, several patients suffered open fractures and abdominal injuries. In the operations theater, MSF and Ministry of Health teams performed lifesaving surgeries on five people. An additional 34 patients were referred to the teaching hospital in Peshawar.

“We not only heard but felt the explosion,” says Dr. Sloboda, an MSF doctor who works in the hospital’s emergency room. “It was really just outside the hospital and within minutes casualties were flooding in.” The teams were able to manage the massive influx of people, conducting triage in the ER itself.

This is the third time in the past six months that MSF has had to initiate a mass casualty plan in the hospital’s emergency room, and for the past year, MSF has been training hospital staff to respond to events like this. “Our aim is to provide the best possible medical care to those who need it most,” says Dr. Sloboda. “We have been able to save quite a number of lives, despite the overwhelming number of patients in the ER following the explosion.”

He continues: “When it comes to emergency response, the sufficient supply of drugs and medical materials, as well as an adequate number of trained staff, is crucial.”

Together, MSF and Ministry of Health medical teams treat approximately 1,100 patients each week in the emergency room at the hospital in Timurgara. MSF has also established a new operating theater, a post-operative unit, and a sterilization and waste management system for the hospital.

Since 1998, MSF has been providing free-of-charge medical assistance to Pakistani nationals and Afghan refugees suffering from the effects of armed conflicts, poor access to health care, and natural disasters in the North West Frontier Province, the Federally Administered Tribal Areas (FATA), Balochistan and Kashmir. MSF chooses to rely solely on private donations for its work in Pakistan and does not accept funding from any government.