As winter approaches, MSF teams are rushing to provide up to 2,000 transitional shelters for flood survivors in Sindh Province. 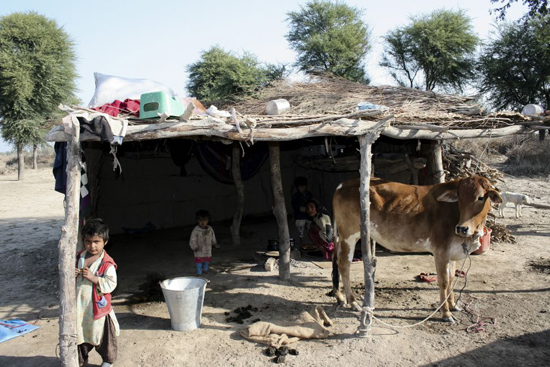 A vista of dusty, thin tents and shelters made of tree branches stretches into the distance in the vast, unplanted fields of Raziq Binu, a village in Pakistan’s Sindh Province. Outside the makeshift shelters, children play with pieces of wood and trash. They are smiling despite the fact that they have neither shoes nor warm clothes at time when the early winter temperatures drop to nearly freezing at night.

Six months ago, Raziq Binu, which sits three hours north of Karachi by car, was devastated by the floods that washed away houses, crops, animals and livelihoods across the country. Asma Mahreen, her husband, and their six children finally made it back here after spending five months moving between different camps in Sindh and neighboring Balochistan Province. “Like most of the people in our village, our home has been washed away,” she said while making lunch in her cramped shelter, a few steps from where the family keeps their cattle. “We found nothing when we went back. We just built this shack last week using whatever material we could find in the woods, but it is getting very cold lately and we are suffering, especially our children.” 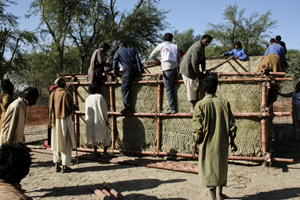 One the of transitional shelters MSF is helping displaced people build in Rinu Baziq and elsewhere in Pakistan.

This family is one of many in Sindh who lost their home when last summer’s floods wreaked havoc throughout Pakistan. As the temperature continues to drop, MSF teams are rushing to provide up to 2,000 transitional shelters for people in and around the surrounding Jamshoro and Johi districts.

“My children have been complaining about the cold but we are simply helpless,” said Musdaq Ali, Asma’s husband. “We have nowhere else to go and no means to make things better. As parents, it hurts us to be helpless, to see our children suffer and not be able to give them what they need.”

Ali was waiting to receive a MSF shelter kit, which contains bamboo frames, plastic sheeting, mats for the walls and the roof, and insulation material. The transitional shelter is designed to last for one year and to give flood survivors a dependable sanctuary while they set about trying to rebuild their lives.

MSF teams show villagers how to use the material in the kits to construct their transitional homes so it is as strong and durable as it can be. Saleem Bushk, 45, attended one such demonstration, then got to work tying down the branches on the roof to one of the vertical bamboos poles. “Even before the floods, as a casual laborer, I could barely support my wife and our eight children,” he said afterwards. “Now without a job, and not enough food to eat, all I can think of is to find a way to keep my family from starving, let alone to give them a home.”

The situation is not without hope; six months after the floods, seasonal crops have started to sprout again. Yet the road to recovery for flood survivors remains daunting. “Six months after the floods, too many people are without anything, not even food or a way to earn a living,” says MSF team member Kamran Khan. “The good news is that we are helping them put a roof over their heads, a place to call their own and somewhere to keep their families safe.”

As he loaded the supply set onto his donkey cart, Musdaq Ali smiled. “I can now build a home for our family,” he said. “I have asked our neighbors for help, and inshallah”—God willing—“within a few days, it will be ready and my children will be warm and safe at night.”

Since the start of the floods in Pakistan, MSF has distributed 68,903 relief item kits and more than 17,000 tents; performed 96,656 medical consultations; screened more than 43,000 children and pregnant and lactating women for malnutrition; treated more than 5,000 malnourished children; distributed 7.6 million liters of safe water per day; built 843 latrines, 280 shower sites, and 130 hand-washing points; and constructed more than 1,000 transitional shelters.

Since 1988, MSF has been providing medical assistance to Pakistani nationals and Afghan refugees suffering from the effects of armed conflicts, poor access to health care, and natural disasters in Khyber Pakhtunkhwa, Balochistan, Punjab, and Sindh Provinces, as well as the Federally Administered Tribal Areas and Kashmir.