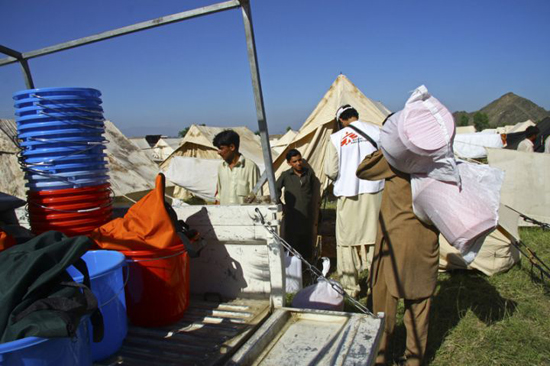 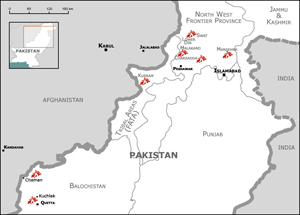 The volatile situation in Pakistan’s North West Frontier Province (NWFP) continues to force more and more civilians to flee their homes. A total of 27 internally displaced persons' (IDP) camps in six different districts have been set up to give temporary shelter, but many people remain trapped in the conflict areas, due to insecurity and strict curfews, prevented from gaining access to food, water and emergency medical care.

In Mardan, northwest of the capital, Islamabad, Doctors Without Borders/Médecins Sans Frontières (MSF) is supporting a displaced persons’ camp, providing health care, tents, and access to clean water, as well as building latrines and distributing relief items. The needs here are huge, says Jean-Pierre Amigo, Emergency Field Coordinator for IPD in Pakistan. “On the fourth day, this camp reached its limit to receive more people,” Amigo said. “So far we have set up 516 tents in this IDP camp and we received the permission to use the neighboring land to set up an extension that can host additional 700 to 800 tents.”

In the MSF medical facility in the Mardan camp, medical staff are performing consultations for both male and female patients. Staff provide free medicines and offer 24-hour emergency response and referral by ambulance to the nearest hospital. Teams have also set up a labor and delivery room with ante-natal and post-natal care.

“Since I arrived in the Mardan IDP camp we have had between 150 and 300 medical consultations per day,” says MSF’s Dr Amjad, who previously worked at the MSF-supported Saidur Sharif hospital in Swat before he was forced to flee the area. “The most common health problems that I have seen so far are cases of watery diarrhea, scabies, heat exhaustion, and general pain from walking long distances by foot through the mountains.”

In so called “non-official camps” where people are taking shelter in Mardan, such as mosques and school buildings, MSF is also distributing relief items, including cooking sets and hygiene kits.

MSF was forced to halt operations in the volatile Swat district in mid-April when the conflict was intensifying. As MSF was the only organization supporting the hospital in Mingora, Swat’s largest city, and providing ambulance service in that region, people there have been left with no access to emergency medical care.

MSF continues to run activities in Baluchistan, where it operates projects for mother-and-child health care and nutrition; in Kurram Agency, providing health care for children, emergency medical response, and distribution of relief items; and in the Peshawar area, where it provides emergency medical services, supports primary health centers, and distributes relief items to displaced people staying with host families. MSF also supports an IDP camp in Charsadda and has distributed relief items to displaced people in Peshawar, Charsadda and Mardan since August 2008.