A month after floods began spreading across Pakistan, MSF continues to scale up activities and expand its work to new locations 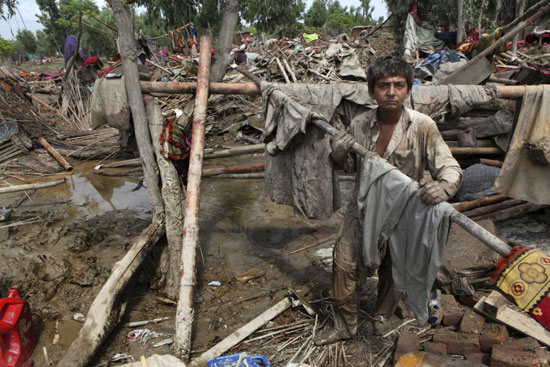 A boy stands in a home wrecked by the flooding in Pakistan.

A month after floodwaters began spreading across Pakistan, uprooting thousands of families and many entire communities in the process, Doctors Without Borders/ Médecins Sans Frontières (MSF) continues to scale up activities in the affected areas while preparing to expand its work to serve new locations and places where thousands of people are cut off from assistance they vitally need.

To curb the possible outbreak of waterborne diseases, MSF is ramping up the distribution of clean water in larger towns and remote villages located throughout the Charsadda, Swat, Nowshera, Lower Dir, and Dargai districts in Khyber Pakhtunkhwa province. In the coming days, MSF will also start water and sanitation activities in Sindh and Baluchistan provinces as well.

Teams are also planning to assess the water supply systems in Dera Murad Jamali and Sukkur, towns in Baluchistan and Sindh provinces, respectively, in order to ensure that the public water supply plant sufficiently chlorinates its water before it reaches the population at large.

Across Pakistan, MSF is now providing at least 540,000 liters of clean through fixed and mobile water points—trucks, tanks, taps, and stands—and house-to-house distribution. MSF is also providing containers and buckets to families who need them and helping local communities clean and rehabilitate contaminated wells. 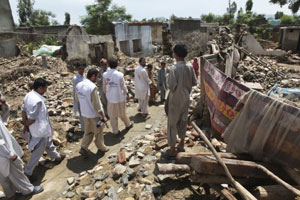 MSF staff conducting an assessment in a Pakistani village that was battered by the flooding.

“It’s worrisome that some families with small pumps at home have started using their water source again,” explained Muhammad Shakeel, a member of MSF’s water and sanitation team in Nowshera. “This is not good because the water is still contaminated, and this can lead to many waterborne diseases. We will continue to provide safe water until we can put in place a system to check if the water is good enough for daily use.”

With the threat of more rainfall and new floods still looming, MSF continues to provide affected and displaced people with basic necessities to help them maintain a minimal standard of living and prevent the spread of diseases.

In Baluchistan and Khyber Pakhtunkhwa, more than 14,675 relief kits and 4,855 tents have been distributed. A typical kit includes buckets, soap, laundry soap, a tooth brush, a jerry can, hygiene items for women, a towel, plastic mugs, kitchen utensils, plastic sheeting, tents, a mattress, and water purification tablets. In the coming days, as teams assess new locations more relief kits and tents will be provided to those in need.

Health promotion workers are playing a crucial role in raising awareness about health risks. During distributions, for instance, they show people how to use water purification tablets to obtain safe drinking water. Relief packages distributed typically include 20 purification tablets, which, when used properly, allow a family of seven to have safe, clean water for a period of two weeks.

In Dera Murad Jamali, to take another example, MSF is concerned that unhygienic conditions are compounding pre-existing malnutrition issues. Health workers are therefore also addressing both hygiene and nutrition. Furthermore, at an emergency feeding program that predates the floods, MSF is currently treating at least 300 children younger than 5 years old for severe malnutrition.

Since August 1, MSF has provided more than 16,664 consultations to people affected by the floods. Roughly half of those consultations were conducted in 14 mobile clinics in and around Dera Murad Jamali, Khabula, Sobhatpur, Malakand, Swat, Lower Dir, Charsadda, Sukkur, and Peshawar.

Due to an increasing number of patients with acute watery diarrhea, MSF has also set up diarrhea treatment centers (DTCs) in Swat, Lower Dir, Malakand, Hangu, Kot Addu, and Dera Murad Jamali. At the same time, MSF has augmented its personnel and its medical and logistical capacities to treat waterborne diseases such as cholera. More DTCs will be opened as needed.

In Khyber Pakhtunkhwa’s Swat district, a 20-bed isolation unit has been established at the hospital in Mingora; it has a tent for oral rehydration treatments and hygiene promotion. In the town of Dera Murad Jamali in Baluchistan, the team has set up a 20-bed DTC in order to cope with the massive influx of patients from neighboring districts that are still flooded. In Kot Addu, in Punjab, MSF added another 70 beds to the 30-bed DTC. Thus far, the teams have treated approximately 1,600 cases of acute watery diarrhea.

In Baluchistan and in the northern reaches of Sindh province, the rising water levels of the Indus River have driven 90 percent of people in areas such as Usta Muhammad, Dera Allar Yar, and Ganakha from their homes. In southern Kashmir and southern Sindh, floods have also forced families to seek refuge on higher ground, on embankments along the main canals, railway lines, or roads.

In Sukkur, in northern Sindh, MSF has started distributing relief items and has launched three new mobile clinics that are providing free medical services. Mobile teams in Sindh are finding groups of up to 1,000 people desperately in need of medical attention, particularly the children among them. Also in Sukkur, MSF is supporting a 30-bed pediatric ward for children under 5 years of age.

In southern Sindh, MSF set up an office in Hyderabad to coordinate relief activities in the area. Exploratory teams are still assessing other parts of Khyber Pakhtunkhwa, Punjab, Sindh, and Baluchistan, gauging the immense medical and humanitarian needs of the affected population and preparing to respond by providing safe water, DTCs, and medical care through mobile clinics.

More than 110 international staff are currently working alongside 1,200 national staff in pre-existing and flood response programs in Pakistan.

Since 1988, MSF has been providing medical assistance to Pakistani nationals and Afghan refugees suffering from the effects of armed conflicts, poor access to health care, and natural disasters in Khyber Pakhtunkhwa, the Federally Administered Tribal Areas, Baluchistan, and Kashmir. MSF does not accept funding from any government for its work in Pakistan and chooses to rely solely on private donations.