A May 26 suicide attack left 36 people dead and approximately 60 wounded in the city of Hangu, blocks from the hospital where MSF teams staff the emergency and surgery departments. 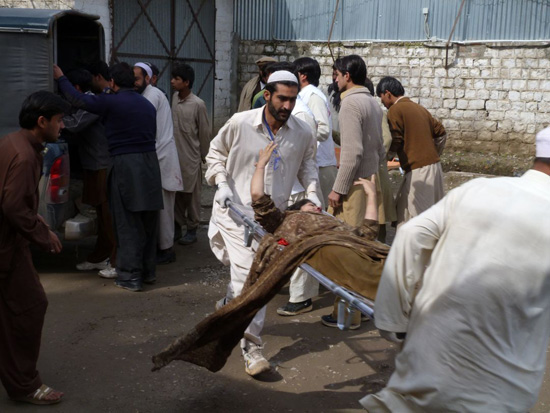 MSF staff responding to an earlier mass casulaty incident in Hangu, in March of 2011.

On May 26, a suicide attack killed 36 people and wounded approximately 60 more near a police station in the city of Hangu in northwestern Pakistan, just a few blocks from the hospital where Doctors Without Borders/Médecins Sans Frontierès (MSF) teams staff the emergency and surgery departments. Working with the hospital's teams, MSF treated 58 victims.

Brian Moller, MSF's project manager in Hangu, describes what happened: "Two minutes after the explosion, wounded people streamed into the emergency room, where we managed the triage. We saw severe head injuries, multiple fractures, serious chest wounds and shrapnel in arms and legs. Most of the patients have already left the hospital. Seven received emergency surgery, four were referred to Peshawar, and 21 remain hospitalized in our emergency department, including three who are still in critical condition. However, despite the stream of wounded and the chaos that followed the explosion, we managed to save several lives."

Additional coordinators and medical staff arrived from Islamabad the following morning. The surgeon from MSF’s program in Peshawar also joined the Hangu teams. Psychological support will be offered to the staff, international and Pakistani, who express a need.

Thomas Conan, MSF's head of mission in Pakistan, traveled to Hangu as well. "Most of the hospital windows were destroyed by the explosion's blast. The labor and delivery room will have to be cleaned thoroughly, but fortunately there was no additional damage and, thankfully, no hospital employees were wounded."

"In the year that we have been working in Hangu, we have already responded to more than 20 incidents like this one that have resulted in large numbers of victims,” Moller says.

To respond properly to this kind of emergency requires preparation. The hospital staff has thus been trained to triage victims and implement action plans in the event of mass injuries.

To ensure the safety and security of patients and medical teams, MSF prohibits visitors from bringing weapons inside the hospital and calls on all members of the community, political parties, armed forces and opposition groups to respect the neutrality of health care facilities.

MSF was the first NGO to provide medical support to the Hangu hospital. In one year, our teams have treated more than 15,500 patients and performed 700 operations.

Since 1986, MSF has been working in Pakistan with Pakistani communities and Afghan refugees who are victims of armed conflict, lack of access to medical care and natural disasters. Our teams are providing free emergency medical care in Kurram Agency, Hangu and Peshawar, in the Lower Dir, Malakand and Swat districts of Khyber Pakhtunkhwa Province, and in Baluchistan and Sindh provinces.

MSF's programs in Pakistan are funded exclusively with private contributions.