Pakistan: "People are still too afraid to return to their homes" 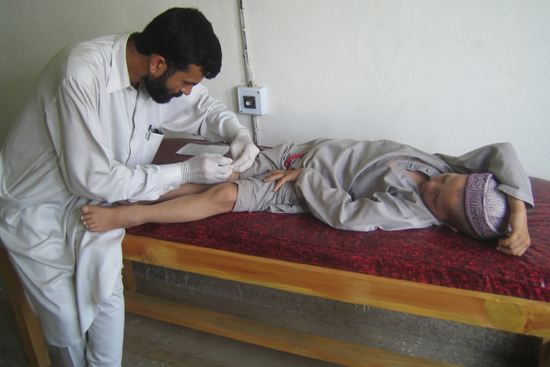 In a health center in Darband in the North West Frontier Province, a lab technician takes a tissue sample from a child to test for leishmaniasis. 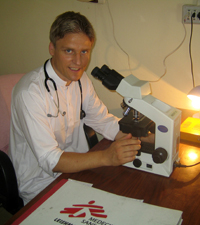 Since April, the conflict in the North West Frontier Province between Pakistani Taliban factions and the government has been intensifying. According to official figures, over two million people have fled the violence in the Pakistani province. Tankred Stöbe, Chairman of the Board of Directors for the German arm of Doctors Without Borders/Médecins Sans Frontières (MSF), has just returned from the region where he was working as a medical coordinator. He now reports on how the population is coping.

Can you describe the conditions in a district such as Mardan, where so many IDPs now live?

With temperatures between 40 and 50 degrees Celsius (104 and 122 degrees Fahrenheit), it is currently very hot. This means that any activity requires more effort, both for aid workers and for those who require their help. The landscape here is largely flat and life is governed by arable and livestock farming. Internally displaced people (IDP) camps set up by the government and the military are mostly empty, as the overwhelming majority of the displaced are staying either with friends or relatives or in public buildings such as schools. Many people are still too afraid to return to their homes.

Therefore, the strain on the host families is enormous. For months now, residents have been taking in displaced families, which is pushing many of them to the limit financially, emotionally, and physically.

How is MSF helping the IDPs and their host families?

For months now, residents have been taking in displaced families, which is pushing many of them to the limit.

We provide free treatment to anyone who comes to one of our clinics. At the hospital in Mardan, we have set up an emergency department as well as treatment stations for both men and women. There is also a severe diarrhea treatment center, which is isolated from the main hospital to ensure that hygiene standards are not compromised. We treat an increasing number of suspected cholera patients at the center in that endemic region. The World Health Organization (WHO) has performed analysis for further investigation. We are working in six primary health centers in and around Peshawar, the capital of the North West Frontier Province. Every week, we treat approximately 1,000 patients, most of whom are suffering from diarrhea, respiratory diseases, or skin conditions.

We treat many sick children, such as 10-year-old Basit. Accompanied by his mother, he arrived at the primary health center in Darband in the east of the North West Frontier Province, where we were already treating his two brothers. His knee was swollen and itchy, and like his brothers he suffered from a common illness in the region. Although not well known, leishmaniasis is an old disease affecting some two million people every year. The symptoms include a high fever, red skin sores, extreme weight loss, joint pains, and an enlarged spleen. In its most dangerous form, the illness is called kala azar and if left untreated leads to certain death. Basit is not suffering from this form of leishmaniasis and therefore has every chance of making a full recovery, even if this means being subjected to a course of treatment involving extremely painful injections.

How do things stand for patients injured in the fighting?

While the number of acutely injured patients is decreasing, surgical aftercare remains a problem. Furthermore, few places in Pakistan have sufficient acute care provisions for the wounded. People are still dying as a result of attacks. Providing these people with emergency aid is a huge challenge. Injured people who could be saved are dying before they even make it to a hospital. Emergency care in the hospitals is unacceptable and requires urgent improvement. This also applies to primary medical care in rural areas, especially in the areas near the border with Afghanistan.

Is sufficient help available and how does the future look for these people?

This year’s violence in northern Pakistan has clearly led to the country's most severe humanitarian crisis since the earthquake in Kashmir in 2005. There is just about enough aid for the IDPs from the Swat valley. However, there are other groups of IDPs, such as members of the impoverished Bajaur tribe from a region northwest of the Swat valley. When these people return home, they will have to rebuild their lives from nothing, which is all the more difficult in the dangerous political climate. They will be dependent on external aid for many years to come.

In Mardan district, MSF operates an outpatient clinic in a displaced persons camp housing 5,800 people, and provides shelter, relief items, and water and sanitation services for the displaced in the camp. Mobile clinics providing prenatal consultations are carried out in eight different schools that are housing displaced families.

In Pakistan, MSF does not accept funding from any government or donor agency, and relies solely on private donations from the general public to carry out its work. MSF also runs medical programs in Peshawar, Lower Dir, Malakand, Mansehra, Kurram Agency and Baluchistan province.