Pakistan: Q and A on MSF's Flood Response

In many hard-hit areas, MSF was the first international emergency organization to respond to the devastating floods that swept through Pakistan in late July 2010. Six months later, many of MSF's activities there have evolved. 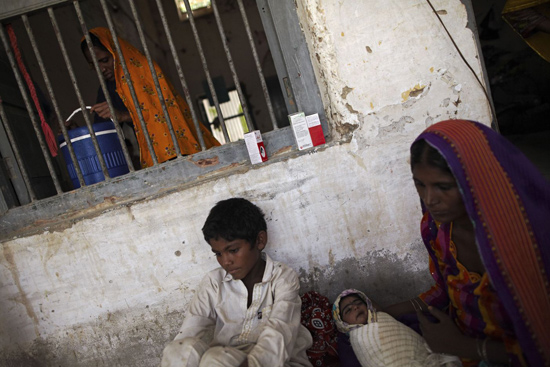 A family displaced by the floods takes shelter inside a high school in Sukkur, Sindh Province, in September

In many hard-hit areas, Doctors Without Borders/Médecins Sans Frontières (MSF) was the first international emergency organization to respond to the devastating floods that swept through Pakistan in late July 2010. Along with local organizations, MSF teams were able to react immediately to meet the needs of people affected by the floods. Six months later, many of MSF's activities there have evolved. 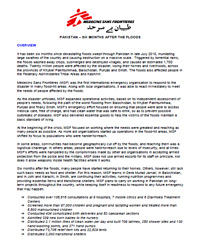 What has MSF done to respond to this emergency?

What is the situation on the ground now six months after the floods?

As can be expected, the needs have changed six months after the floods. People returning to their villages are vulnerable due to the winter weather and the lack of shelter, food, water, and medical care. They have lost absolutely everything. However, on the other hand, we have seen a few clearly positive signs. Most of the flood water has receded. According to our mobile teams, what used to be a 45-minute boat trip between Sehwan and Johi is now accessible by road. Crops have started to sprout again in the field on both sides of the road and some of the population told us that they hope to harvest some crops in March. Families have started returning to their destroyed villages and are trying to rebuild their lives.

Yes, in Johi and Karachi, Sindh Province, and Dera Murad Jamali, Balochistan Province, we are still running flood response activities—providing essential items, water, and transitional shelters to the affected communities. On the medical side, we are running mobile clinics, nutrition programs, health promotion and mental health. As the government and other actors have reduced their assistance in all eight camps in Karachi, we are considering boosting our activities to provide support to the displaced population there. At the same time, teams in Sindh are rehabilitating local health clinics, donating medical equipments and drugs to ensure that returnees have the same level of health care they did before the floods.

The government of Pakistan said that emergency phase is over and will be ending relief operations on January 31. Do you agree and how does this affect MSF’s activities?

Indeed the acute phase of emergency when the needs were huge and the actors were very few immediately after the floods—is over in most parts of the affected areas. MSF has observed a significant drop in the number of internally displaced persons (IDPs) in Jamshoro and Johi in the past three months. However, the situation remains fragile; returnees are  living in poor conditions, so the needs are obviously there and support is still required. Otherwise, we could quickly fall back to a crisis situation. But responses now must be adapted. For example, we are now working on the rehabilitation of health structures to improve access to health care for the returnees, establishing hand pumps to improve access to safe water and distribution of shelter that is better adapted to last longer so flood-affected populations can better cope with the long recovery phase. At the same time, in southern Sindh and eastern Balochistan, we are still providing medical care, safe water, and shelters to families in need.

Why did MSF reduce activities if aid organizations and media report that this is still an ongoing crisis?

Because MSF is an emergency organization, and because the nature of the needs have changed, there is also a need for other actors who are better equipped to deal with the longer term recovery solutions needed in this context. This is primarily the role of the government. That's why MSF starts to handover activities to either the government or the newly arrived and more development-oriented organizations.

Media has reported an alarming rate of severe malnutrition in Sindh after the floods, is it what MSF also observes on the ground?

As most people lost their homes and their crops, food shortage became a serious problem for many. But there was an existing and chronic problem in Sindh even before the floods. We saw a high number of malnutrition cases in the flood-affected areas, such as Sukkur, Larkana, Jamshoro, and Sehwan right after the floods, which could probably be linked to the flood or due to the nutrition situation before the floods. In response, we ran different nutrition programs in Sindh to address this issue. The malnutrition rate we see nowadays where we are currently working in Sindh is somewhat similar to the rate before the floods.

Why did MSF not continue this nutrition program in northern Sindh?

We only scaled down or handed over our activities in areas where more aid actors were present so as to focus our effort on cut-off or remote areas where the needs are still acute and assistance is not enough. Today, we still have nutrition program in southern Sindh—in Jamshoro and Karachi. In Balochistan, we had been running a nutrition program before the floods and will continue to be the only international organization working to improve the nutrition situation in this province since the needs are still there.

Is MSF asking other actors to step in at this stage?

Yes. The the returnees’ needs are huge and they need a lot more support to cope with the situation, however that support should be adapted to the long-term needs and chronic problems that exist in this area.

Since 1988, MSF has been providing medical assistance to Pakistani nationals and Afghan refugees suffering from the effects of armed conflicts, poor access to health care, and natural disasters in Khyber Pakhtunkhwa, Balochistan, Punjab, and Sindh provinces, as well as the Federally Administered Tribal Areas and in Kashmir.