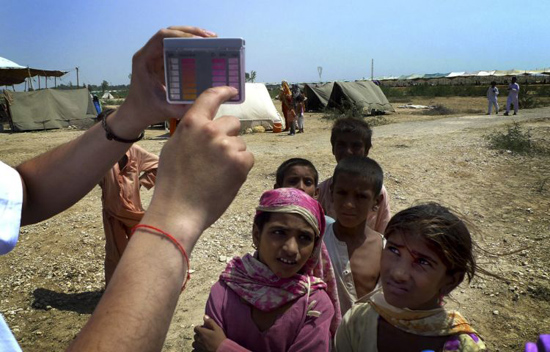 Children look on as an MSF water and sanitation expert checks chlorine levels at the water distribution point in Jamshoro.

Sadia is five years old. Seven times a day she walks nearly half a kilometer with two heavy pots of water balanced on her head and another bottle clenched under her skinny arm. She does so in order to supply water to her family members, who were driven from home in August by the monsoon floods and are now living in the Shahbaz Colony camp on the outskirts of Jamshoro, in Pakistan’s Sindh province.

Nearly 43,000 displaced people are living in make-shift shelters, tents, and abandoned houses in Jamshoro, and each needs at least 25 liters of safe water per day for drinking, cooking and washing. Having access to a regular and dependable supply of safe water decreases the risks of contracting potentially deadly water-borne diseases.

It used to be that a large tanker truck would arrive twice a day with 10,000 liters of water, and camp residents would line up with their pots, cans, and barrels. Now, though, they trek to a massive blue tank that was installed by Doctors Without Borders/Médecins Sans Frontières (MSF) at a distribution point near the camp. “Having the tank here means people like Sadia now have access to water 24 hours a day, and they can come collect water whenever they want,” says Lionel Larcin, an MSF water and sanitation expert. “They don’t have to wait in queues anymore when the water tanker comes around.”

Since the flooding began, MSF has been working to ensure that people can get the clean and safe water they need. In Jamshoro, MSF water and sanitation technicians operate water purification activities at the water treatment plant of the Liaquat University of Medical & Health Sciences (LUMHS).  It is here that MSF makes sure that the 300,000 liters of water the organization distributes each day—employing 10 water tanker trucks and four tractor tankers to do so—meets safety standards.

There’s quite a network of people involved in the distributions. Muharam Ali, who drives one of the tanker trucks, has been in the water trucking business since 1970. “I really feel for the people who have been affected by the floods,” he says. “It gets really hot here in Jamshoro and they need safe drinking water. I know we are doing good work here because this water is of good quality. I have seen other water tankers, not working for MSF, simply picking up water from out of the canal. This isn’t safe.”

Mohammed Idrees, who is in charge of chlorinating the water, keeps a meticulous ledger in which he details the results of tests he conducts on each consignment of purified water that leaves the LUMHS treatment plant. He first measures the turbidity, the amount of particles suspended in the liquid, and then checks the pH level to determine how much chlorine is needed to purify the water. He also carries out tests on 20 liter samples, using 4 to 6 milliliters of chlorine and monitoring how this dissolves during 30-minute, one-hour, and three-hour intervals.

Idress’ apprentice, Toufiq Ahmed, aged 22, then takes over. It is his responsibility to ensure the correct amount of chlorine is added into the tankers that delivers the water to the camps. “I add three spoons of chlorine to the water in the 10,000 liter tanker trucks and half of that to the tractor tankers,” he explains. “At first I didn’t appreciate how vital my job is. But I feel the responsibility fully because I understand the impact of what we do. I have seen the thirsty people in the camps when I used to drive one of the water trucks. It makes all the difference to them that they can trust the water we supply because it won’t make them sick.”

One recent afternoon, three men gathered at the water distribution point. Nazir Ahmed Manjhoo and Ghulab Machhi, who both live in the Shahbaz Colony camp, were deep in conversation with Javid Ali, a visitor from the Kiranshoro camp near Hyderabad. They were sharing stories of loss. Nazir was a farmer, Ghulab a shopkeeper; both lost their livelihoods and homes. Javid’s father was stuck in their village as the deluge came, and his fate remains uncertain. “The floods destroyed everything,” says Nazir. “I don’t know what we will do in the coming months or even years. It is going to be really hard. But for now, we have safe water and shelter.”

Since 1988, MSF has provided medical assistance to Pakistani nationals and Afghan refugees suffering from the effects of armed conflicts, poor access to health care and natural disasters in Khyber Pakhtunkhwa, Balochistan, Sindh, and Punjab provinces, as well as the Federally Administered Tribal Areas and Kashmir.

Since the start of the floods in Pakistan MSF has distributed 57,714 relief item kits and 13,755 tents; treated more than 1,748  malnourished children and performed 49,534 medical consultations; set up seven Diarrhea Treatment Centre and operated seven mobile clinics. MSF also distributes 1,250,400 liters of clean, safe water per day and has built 714 latrines.

135 international staff are working alongside 1,198 Pakistani staff in MSF’s existing and flood response programs in Pakistan.