Patient's Story: "That man had raped me and now I was pregnant" 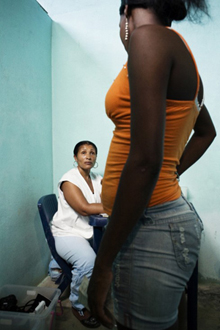 A young woman talks with an MSF worker at a health care project focused on victims of sexual violence in Quibdo, the capital of Choco department.

An MSF patient from Quibdo, Colombia, was 13 when she was raped by her neighbor two years ago. The difficult consequences have had a major impact on her life.

Millions of children, women, and men are affected by sexual violence across the world. Doctors Without Borders/Médecins Sans Frontières (MSF) is publishing one patient’s story every week for five weeks in order to raise awareness of this widespread suffering.

This is her story:

The man lived next to us. We all shared a bathroom. I was home alone, and it was morning before I had to leave for school. I was washing and he saw me and came into the house. My little sister had damaged our TV plug so he told me to come in and watch his TV. So I came in with a chair, and as I was sitting down he came close to me, grabbed my arms and tried to make me sit on the bed. I said that I wouldn’t sit on his bed with him as it was disrespectful. He insisted and so I finally sat on his bed. He jumped on top of me and grabbed my hands. I said, “Don’t do it!”

Afterward, I didn’t want to tell anybody what had happened. But I started to feel very sick and would vomit all the time. I felt sick at the smell of food. Even the smell of the flowers from my sister’s wedding made me sick. My older sister and my Mum decided to take me to a doctor. During the appointment, the doctor did a test and told me I was pregnant. My sister asked, “Whose baby is it?” And I kept saying, “I don’t know!” Then she asked about the man who lived next to our house and I threw up right there. My Mum started to cry and I started to cry too. Then I told them what happened, that he threw me on the bed and took me by force.

After I learned I was pregnant, I was devastated. That man had raped me and now I was pregnant! I was very angry at him and I cried all the time. I didn’t want to keep the baby. All I wanted was to carry on with my studies. If I had a child at 13, my dreams would be destroyed. But it was a difficult decision.

I didn’t want to leave the house anymore. People walking past me would look at me in a strange way. Everybody knew I had been raped. I even wanted to commit suicide. After what happened, some girls who had been my friends started calling me “la abortadora” (“the aborter”). Nobody wanted to sit next to me in school, and when we did group assignments nobody wanted me in their groups. Even one of my teachers disrespected me. She told me it was wrong to have an abortion. I didn’t like that. I don’t like it when people judge me. That’s why I ended up leaving that school and going to another one. I was a very good student.

Today, part of me is happy because I was able continue with my studies. That was the most important thing to me. Of course, another part of me is sad because of everything that happened. I have a little baby niece and when I see everybody holding her, playing with her, it makes me think of the baby that I didn’t have.

My neighbor disappeared after what he did to me. I thought I saw him once, when I was on the bus to school, but I’m not sure if it was really him. He was walking down the street with a woman and a baby, so maybe he had a child. When I saw him my heart beat fast. I became nervous and I could feel all that rage coming back to me.

I want to thank MSF for the support it gave me and also for letting me tell my story. I feel strong now. I want people to know what happened to me.

In Quibdo, an MSF mobile medical team—a nurse, a doctor and a psychologist—visit the most vulnerable areas of the town every week and provide antenatal care, family planning, treatment of sexually-transmitted diseases, and psychological care. MSF also supports the maternity ward in the main hospital in Quibdo.