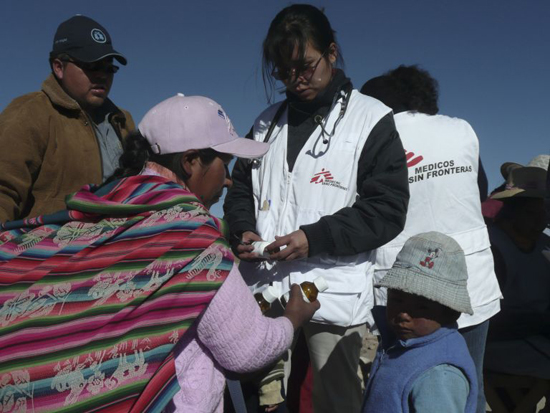 Loreto Barceló is head of the MSF regional emergency team based in Panama. Currently she and her team are in Juliaca, a town in Peru’s southeastern Puno region, responding to a cold spell that has caused an increase in both the incidence of and mortality from respiratory infections, especially pneumonia, in children under five years old.

Why is the MSF emergency team working in Peru now?

We are responding to an emergency situation within a chronic crisis. Each year, the south of the country faces strong cold spells, but in the past four years temperatures have been especially low and this has impacted the health of the population. In recent months, there has been a sharp increase in respiratory infections and resulting deaths throughout the country. The low temperatures in the area where we are working have caused a higher rate of mortality than expected due to pneumonia. This is affecting mainly children under the age of one, so we have decided to intervene.

Which population is the most affected by this cold spell?

The low temperatures in the area where we are working have caused a higher rate of mortality than expected due to pneumonia. This is affecting mainly children under the age of one, so we have decided to intervene.

A few weeks ago, we conducted an exploratory mission in the area and we saw that the province San Román, in Puno, was the most affected, mainly in the capital Juliaca. In this city there is a large migrant population, mostly indigenous people living in the countryside who migrate to the city for work. This is a very poor, economically and socially vulnerable population who live on the outskirts of Juliaca. They are the ones most affected by this cold.

What are the main consequences of the cold wave on people’s health?

So far, there has been a significant increase in respiratory infections. The most serious cases have been complicated pneumonia. Children less than a year old are the most vulnerable to this disease. So far this year, there have been 46 deaths in children under five years old in Puno, and 274 in the country.

If the most affected people live in town, why don’t they have access to health care to treat these diseases?

The most affected people live near health facilities, but they do not go to them. Many have explained to us that there is a lack of "warmth" among health staff and that they do not feel welcome in these facilities. But there are other factors; for instance, most of those affected are indigenous people who only speak Quechua or Aymara, and cannot communicate with staff in centers. Furthermore, these are very poor people. Many mothers work in the market all day and cannot afford to bring their children to the doctor. The Peruvian health system has comprehensive health insurance to provide free medical coverage to people living in poverty or extreme poverty. However, many are not enrolled due to lack of information, lack of flexibility of the system, or bureaucratic difficulties.

What activities will MSF carry out?

We will work in coordination with the Ministry of Health in the most affected areas. Five teams, composed of a doctor and a nurse, will visit these neighborhoods, going from door to door to try to locate sick people. Many infections can be treated at home with antibiotics, and the most severe cases—those needing oxygen or breathing assistance—will be referred to the city hospital.

We have also identified the most vulnerable population, mainly children less than a year old and pregnant women—approximately 7,000 people. In the coming days, we will begin to distribute materials to this population, especially blankets, warm clothes for children, and “pañolones”, the special pieces of cloth mothers use to carry babies on their backs.

MSF has worked in Peru since 1985. In 2007, MSF responded to a major earthquake that killed hundreds and destroyed the homes of tens of thousands of people. MSF has also provided care to those living in Peru with HIV/AIDS.