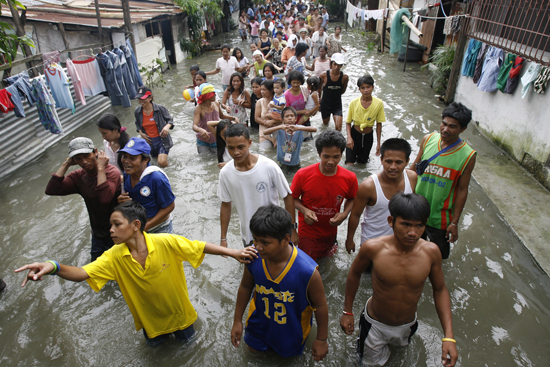 A crowd walks through a flooded street in Pateros, east of Manila

"We have done assessments since the rain..."

"The official figures are now pointing..."

It has begun raining again in the Philippines and another typhoon is forecast for this weekend. Tropical Storm Ketsana, which hit last Saturday, caused major flooding in and around the capital, Manila, displacing 140,000 people. This includes 70,000 people who are now staying in evacuation centers. Many areas are still underwater in the flood-affected areas of eastern Manila and the province of Rizal, southeast of the city.

As affected communities are bracing themselves for the risk of further floods, those living near coastal areas and by rivers are already being evacuated.

Doctors Without Borders/Médecins Sans Frontières (MSF) emergency teams have been conducting assessments by helicopter, and are providing medical and non-medical support to flood victims at evacuation centers. MSF is providing relief items, such as blankets, cooking pots, mattresses, jerry cans, and hygiene kits.

Teams are concentrating their efforts on areas that have been hit hardest by rising waters—the slums and poorest areas of the city.  “In the slums, people don’t want to leave their housing or their belongings, so some of them are living on their roofs, or they have moved from the ground floor to the second floor," said Oifa Bouriachi, MSF’s emergency coordinator in Manila. "They are trying to save what they can.”

MSF teams have also identified affected communities that are extremely remote and difficult to reach.  “One of the challenges of our intervention," said Bouriachi, "is that some of the areas are completely isolated and cannot be reached by road. In some areas, we couldn’t even land the helicopter. So we will have to deploy some major logistical means.”

MSF is currently running a project on Mindanao Island, in the south of the country, providing medical care to displaced people.