As Typhoon Lupit is expected to make landfall on the Philippines on October 22 or 23, the northern part of the country is still trying hard to recuperate from recent weeks of heavy rain, which has caused floods and triggered devastating mudslides. On October 9, dozens of towns and villages in the province of Benguet were hit by mudslides that killed hundreds of people and buried settlements under a thick layer of mud. Doctors Without Borders/Médecins Sans Frontières (MSF) is currently providing medical assistance and relief items to victims in the most affected areas in Pangasinan and Tarlac provinces and is assessing needs in Benguet. 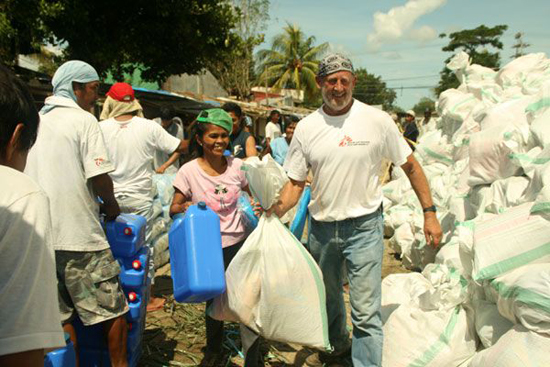 MSF is distributing relief items in the city of Rosales, which was recently flooded when authorities were forced to release water from nearby dams to prevent their collapse.

Weeks after severe storms hit the Philippines, many people are still reeling from damage caused by subsequent floods. In Pangasinan and Tarlac provinces, areas were devastated after authorities were forced to release water from local dams in danger of spilling over. Some MSF patients shared their stories:

“We grabbed our four children went wading through the water towards the evacuation center. The current was strong and we lost our clothes, radio, furniture—everything. I don’t know what we will do because the floods happened just before we could harvest and we have lost our income. I came to the mobile clinic because we are drinking from the deep well and we don’t have any supply of water so the whole family has had bad stomach pains. The children have been coughing and have diarrhea.”

“The water came from the dam and rose nearly 10 feet in places. I had never seen anything like this before. People here were not prepared. Many were washed away—some of those staying in lower houses were wounded by debris. The warnings came too late. Only three hours before the water came, there were some announcements through a loudspeaker on the top of a house but it was too late. Some people ran to higher ground or looked for two story buildings, which got very crowded. Thank God no one was hurt in my family.”

“I have no house anymore. This pile of rubble you see behind me, it’s all that’s left. The water came all at once. I was washed 200 meters away by the current. I swam the best I could but it was really terrifying, because of all the debris. It was such chaos after the flood that it took me two days to find my family. They were really shocked because they thought I had died. My grocery shop was ruined and I lost everything: food, stocks, furniture, house, clothes, everything is gone.”

While the northern part of the Philippines is still trying to recuperate from recent weeks of heavy rain, which caused floods and triggered devastating mudslides, a new storm, Typhoon Lupit, is expected to make landfall soon.

On October 9, hundreds of people were killed and settlements buried under a thick layer of mud when dozens of towns and villages in Benguet Province were hit by mudslides. Doctors Without Borders/Médecins Sans Frontières (MSF) is currently assessing the needs in Benguet, and is providing medical assistance and relief items to people Pangasinan and Tarlac provinces, where flooding has destroyed homes and left people with little food, water, or medical care.

Sitting in a plastic chair in front of a pile of rubble, 63-year old Ernesto Ruperto shakes his head in disbelief. “This mud is all what’s left of my house. I’ve lost everything—my house, my animals. I only have the clothes I was wearing when it happened,” he says pointing at some debris.

All around him, the street is littered with mud-sodden clothes, broken furniture, mangled toys, and scraps of wood and corrugated iron. Houses have been shifted and roofs have collapsed.

In the city of Rosales, Pangasinan Province, the impact of weeks of heavy rain is being felt long after Typhoon Parma made landfall on October 3. Large parts of Rosales have been razed to the ground by a devastating flood after the authorities were forced to release water from several nearby dams to prevent spillovers or collapse. More than a week after the catastrophe, victims are still coming to terms with the extent of the damage.

“The water came in the evening and rose up to 10 feet, it was terrifying. I had never seen anything like this. The current was very strong. I don’t think I would have made it if my son hadn’t come to my rescue,” Ruperto explains. Like many victims in Rosales, he is shocked by what happened. “Now that the water has just begun to go down, I’d like to clean up and rebuild but I’ve lost everything. We need more help.”

As the water recedes, people have started leaving evacuation centers in the hope of rebuilding their houses. But because many roads were blocked, delivering humanitarian assistance has been difficult and in some areas people have still received very little assistance.

MSF has been providing medical assistance and over 9,000 relief kits, including buckets, soap, kitchen utensils and construction kits, in the worst affected areas of Pangasinan.

“Over two weeks after the latest typhoon, people are still badly affected. It is important that the assistance for the northern Philippines doesn’t dry up because there are still significant needs for reconstruction. People here have not only lost their houses, they’ve lost their income, as many paddy fields have been flooded,” says MSF emergency coordinator Voitek Asztabski.

MSF medical teams are also running mobile clinics in villages and evacuation centers and have conducted 1,294 consultations in the area.

“People have spent a long time in the water and the main ailments we see are upper respiratory tract infections, common colds, rashes, and skin and fungal infections," says MSF doctor Etaferahu Eshetu. "There are also some minor injuries, due to the fact that some of them were hurt by debris or injured when they clung to their roofs. But the situation is under control and we will continue to monitor any increase in diarrhea cases.”

Typhoon Lupit has potential to cause further damage and flooding in already severely affected areas. It is predicted to hit the Philippines on October 22 or 23.