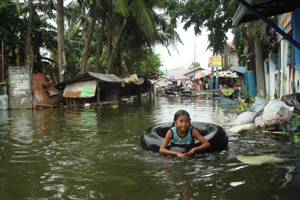 The second severe storm within two weeks, made landfall on the Philippines on October 3, and caused extensive damage in the northern part of the country.

A second severe storm hit the northern part of the Philippines on October 3, causing extensive material damage and killing 15 people. Approximately 170,000 people had been evacuated in anticipation of the typhoon, which has been named Parma. Doctors Without Borders/Médecins Sans Frontières (MSF) has dispatched a team to Tuguegarao, the capital of the northern province Cagayan, to conduct an assessment of the medical needs of affected communities.

The rains accompanying Typhoon Parma were not as severe as initially expected, much to the relief of the inhabitants of Manila. Many of them had seen their homes go under water following flooding caused by Tropical Storm Ketsana, which made landfall in the Philippines a week ago. Ketsana, according to official figures, killed 300 people and displaced 320,000 in Manila and surrounding areas—in total, a population of 3.9 million have been affected.

“Heavy rains would have exacerbated an already very difficult situation,” says Oifa Bouriachi, MSF’s emergency coordinator. “Manila and regions close by were devastated by last week’s tropical storm. Tens of thousands of families are still living in evacuation centers and our teams are continuing to assess the needs and provide help where necessary.”

In response to Ketsana, MSF sent a team of 20 to provide emergency assistance. Two mobile clinics are providing medical consultations in some of the 505 evacuation centers in Manila and surrounding areas. Around 70 consultations are currently being conducted per day by each mobile clinic, and support includes a mental health component for people experiencing post-traumatic stress conditions. MSF is distributing non-food items, such as soap, bowls and plastic sheeting, to people staying in the evacuation centers. Teams have handed out hygiene kits for 6,500 people.

"More flooding would be catastrophic for a population already in a very vulnerable situation, with large areas still under water. Everyone remains vigilant."

Another mobile clinic and non-food item distribution will begin in Laguna Bay, south east of Manila, tomorrow. The Laguna Bay area is still under water and around 100,000 people are living in evacuation centers. “It is the monsoon time in the Philippines and it is feared that more heavy rain may fall in the coming days," says Bouriachi. "The weather forecasts are not looking good. More flooding would be catastrophic for a population already in a very vulnerable situation, with large areas still under water. Everyone remains vigilant."

Continuous assessments of the medical situation are being carried out by MSF teams in and around Manila, including by helicopter. The response by Philippine authorities has been prompt and effective, but despite this, some areas have still not received any assistance. The vastness and topography of the region makes it difficult to access populations that may be in urgent need of assistance.