Philippines: "My house was washed away by the floods" 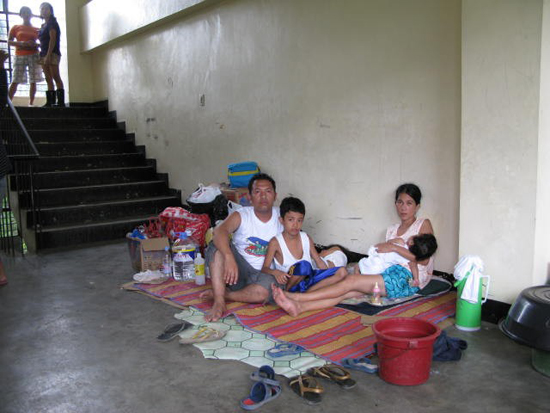 Marco and his family of five were displaced by flooding due to two severe storms. They have sought refuge at the Pasig evacuation center in eastern Manila.

Over the past two weeks, the Philippines has been hit by Tropical Storm Ketsana and Typhoon Parma, which have killed over 300 people and displaced over 490,000. In this story, Manila residents Marco and Amy describe how flooding submerged their homes and displaced the two neighbors to one of the city’s evacuation centers where Doctors Without Borders/Médecins Sans Frontières (MSF) is present.

“Saturday, when the water started to rise, I was in the supermarket where I work, as usual," says Marco. "I received a text from my wife—'Quick. Come home. The water is rising.' I asked my supervisor if I could go and started to run to catch a train. Unfortunately, the trains were already blocked because of the flooding. In the city there was water everywhere. I couldn’t get home. I was terrified. After a few hours, my wife called me, to say, 'I am on the second floor and I have water up to my hips! Please come!' But there was nothing I could do.

"I stayed outside the whole night and on Sunday morning I managed to come here to Pasig where I found two of my children. My wife and my four-month-old baby were still in the house, and with such a small child she couldn’t get out. I went to rescue her. The water level was already starting to go down.

"We have received food, clothes and the hygiene kit MSF brought us today but we are still living in this corridor. It’s noisy, windy—not a place for a family.

"We have been here now for a week and we plan to go back to our house on Monday even if it’s still covered with mud and rubbish. We are lucky we still have our house. Our neighbor has lost everything."

"We have been here now for a week and we plan to go back to our house on Monday even if it’s still covered with mud and rubbish. We are lucky we still have our house. Our neighbor has lost everything.”

Marco’s neighbor Amy sits next to them. She seems tired and nervous, and as she talks tears fill her eyes.

“When the water was coming up, it was horrible," Amy says. "It came so fast that some people were trapped in their house. You could hear them shouting for help. Some had to break the roof of their house to escape—it was horrible.

"I have lost everything. My house was washed away by the floods. I wasn’t able to take anything when I left but the clothes I was wearing. I have nothing left and no money. I used to work as a waitress earning US$2 a day. I might go back to my village, which I left two years ago. I might try and walk there. I don’t know what to do. I have lost everything."