Philippines: In the Wake of the Typhoon

After a recent typhoon caused severe flooding on the Philippine island of Mindanao, an MSF team is providing emergency medical assistance to people whose houses were destroyed and who are now living in evacuation centers. 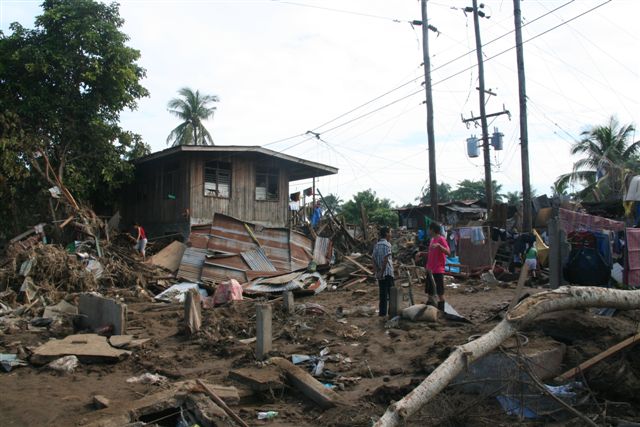 Residents survey the damage caused by a recent typhoon.

After a recent typhoon caused severe, and in some cases fatal, flooding on the southern Philippine island of Mindanao, a Doctors Without Borders/Médecins Sans Frontières (MSF) team began providing emergency medical assistance to people whose houses were destroyed and who are now living in evacuation centers. Pier-Luigi Testa, MSF's deputy emergency program manager, explains.

In December, an MSF team was headed to Mindanao island to assess emergency health needs in the Cotabato, Maguidanao, and Davao areas, where armed conflict has been underway for several years. However, on December 16, during the assessment, a typhoon struck Mindanao, causing many deaths and widespread damage in another part of the island. The team thus halted its evaluation mission and went to the flooded sites.

A month earlier, another MSF team had arrived in Bulacan province, north of Manila, after a typhoon hit there. Team members had carried out medical consultations, provided water, and distributed nonfood items to the affected people. Natural disasters are frequent in the Philippines. Some 30 typhoons of varying severity hit every year, and often cause significant damage.

What are the needs in the region devastated by the typhoon in Mindanao?

The rivers overflowed their banks and flooded entire villages and neighborhoods. The towns of Cagayan de Oro and Iligan were the most affected. The water and mud carried off and destroyed houses. Many people fled and took shelter in evacuation centers that the authorities set up in schools or "barangay halls," public buildings that house important meetings for people of the neighborhood. The needs in these centers are comparable to what we generally see in refugee camps. Several international nongovernmental organizations arrived right away to provide aid, deliver basic supplies and food, and build latrines. But MSF is the only one able to provide health care in cooperation with the Ministry of Health (MOH).

What is MSF doing specifically?

The MSF team will take over for the MOH staff members who were sent out just after the typhoon hit and must now return to their regular workplaces. To start, the team is training local staff to carry out medical consultations at the sites housing the victims from Cagayan de Oro (21,000 people divided among 22 centers) and Iligan (14,000 among 20 centers). We have already identified the main medical issues, which are watery diarrhea and respiratory infections. However, we have also detected suspected cases of leptospirosis and tetanus which will be closely monitored.

The team will also be monitoring the victims' living conditions and their situation. Tent camps have been set up to relieve the evacuation centers and, in particular, the schools, which must be available for the students, who will return soon.