Pneumococcal Vaccine is Launched in Africa, But Are Donors Getting a Fair Deal from Companies?

Children in developing countries will finally have access to this vaccine. But two multinational pharmaceutical companies are receiving a significant payout as part of the scheme. 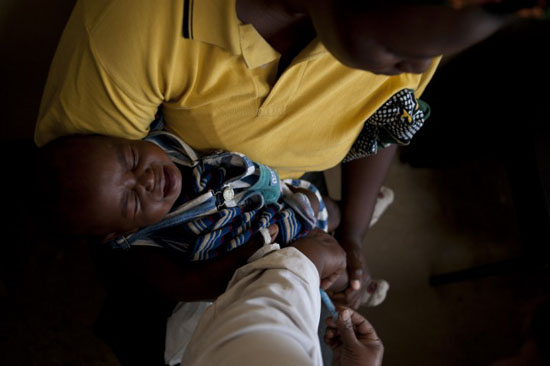 A vaccine to protect children against pneumococcal diseases has been launched in Africa, and Kenya is the first country to receive it. Here, MSF staff administers the vaccine to a child in Silanga Hospital, Kibera.

A vaccine to protect children against pneumococcal diseases—such as meningitis and pnemonia—has been launched in Africa as part of an international program to bring the vaccine to resource-challenged countries. Kenya is the first African country to receive it, and Doctors Without Borders/Medécins Sans Frontières (MSF) is contributing to this national effort by starting to vaccinate children in its Kenyan projects.

For more than a decade, infants in wealthy countries have benefitted from a pneumococcal vaccine, and two improved versions were introduced in Europe and the U.S. in 2009 and 2010. Now, children in developing countries will finally have access to this newest generation of vaccine that can prevent millions of occurances of illness and countless deaths.

But a look at the financing mechanism to support this program, called the Pneumococcal Advance Market Commitment (AMC), reveals that two multinational pharmaceutical companies—GlaxoSmithKline (GSK) and Pfizer/Wyeth—are receiving a significant payout as part of the scheme: the companies have each agreed to sell 30 million doses annually for ten years in exchange for US$10.50 per child vaccinated, plus a total “subsidy” of $225 million for each company.

"Pneumonia is a primary morbidity for young children in Dagahaley Camp where we provide health services to Somali refugees and we are excited about adding this vaccine. During our conversations with the Ministry of Health about the roll-out, the plans for continuing to use it in the rest of the country after the GAVI supply were unclear though, and we are concerned about whether Kenya will be able to purchase it. We plan to continue emphasising the importance of keeping it in the vaccine schedule."

“It’s great news that children in developing countries will finally be protected against pneumococcal diseases by getting this new vaccine,” said Dr. Tido von Schoen-Angerer, executive director of MSF’s Campaign for Access to Essential Medicines. “But it’s very disappointing that the prices agreed with two big pharma companies will be too high for countries to afford when donor support is not, or is no longer, available. Prices need to come down so that as many children as possible can benefit from this vaccine.”

There is no mechanism in place within GAVI or the AMC to encourage competition from manufacturers in developing countries that could sell similar products for less. Some of the $1.5 billion the AMC has slotted as potential payouts to pharmaceutical companies could have been better used to help speed up the development of more affordable products. Vaccine producers in developing countries have said they could sell similar pneumococcal vaccines at US$6 per child, more than 40 percent less than the $10.50 per child currently being paid by GAVI before the subsidy. In today’s tight funding climate, and with countries “graduating” from being eligible for GAVI support, this difference is extremely important.

GAVI, which is hosting the AMC program, also has not paid enough attention to the issue of high vaccine prices in general. Vaccine prices have a significant impact on the amount of assistance GAVI can offer and have contributed to the current GAVI funding shortfall. Lack of funds and high prices have also pushed GAVI to graduate 16 countries from eligibility for future GAVI support.

The GAVI Board Chair Dagfinn Høybråten, has stated he would “welcome the future participation of developing country manufacturers as part of our pressure on industry to bring prices down.”  While this is promising news, there is an inherent conflict of interest that makes it difficult for GAVI to effectively address sustainable pricing: vaccine producers have seats on the GAVI Board. This conflict of interest results in a tendency against transparency and for higher prices.

Ahead of GAVI’s fundraising conference in June, donors should demand that vaccine manufacturers step down from the board. This will allow GAVI to negotiate more assertively for lower, sustainable prices.

As we celebrate the introduction of the pneumococcal vaccine in Africa, MSF is advocating for efforts to find long-term pricing solutions for vaccines so countries can continue to afford and implement improved vaccination coverage, even independent of donor support. The first step in this direction will be to eliminate conflicts of interest in GAVI so that that donor funds are not being used to unnecessarily boost pharmaceutical company profits and instead ensure as many children as possible get access to protection from killer diseases.