Psychologists are an integral part of MSF teams. On the heels of World Mental Health Day, this article examines the vital role they play in helping people overcome trauma. 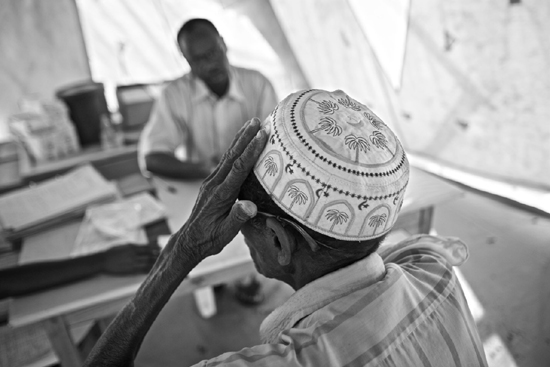 An old man tells his story during a mental health consultation in Dagahaley camp.

In the refugee camps of Kenya and beyond, psychologists are an integral part of Doctors Without Borders/Médecins Sans Frontières (MSF) teams. On the heels of World Mental Health Day 2012, this article examines the vital role they play in helping people overcome trauma.

Siyad Abdi Ar was 16 when he was abused by gunmen in Somalia. Eight years later, the mental scars have still not healed. Since arriving at Kenya’s Dadaab refugee camp in 2010, his mother has kept him chained to a bed by his ankle, anxious that he will wander off and do himself harm.

Many of the refugees arriving at Dadaab are traumatized by their experiences in Somalia, where violence and drought caused them to flee their homes. Since 2009, MSF has provided health care in Dadaab’s Dagahaley camp, including much-needed mental health care and counseling. In Kenya, as in other countries where MSF works, psychologists now form an integral part of the medical organization’s teams.

“In Dadaab, and Africa in general, psychological distress is often not expressed in the same way as in richer countries,” says psychiatrist Pablo Melgar Gomez, who worked in Dadaab from 2009 to 2010 and is now working with Palestinian refugees in Lebanon. “People often complain of physical pains. During the consultation, we try to make them understand that these pains are related to their emotional state."

Because mental illness is not always well understood by the general population, many people with more serious mental health conditions—like schizophrenia and bipolar disorder—may not get the treatment they need. “While I was in Dadaab, I saw dozens of people with mental health problems who’d been chained up or shut away by their families, who were at a complete loss as to how to handle them,” says Gomez. “If we hadn’t intervened, they would be completely without hope of receiving psychiatric care and would still be chained up today.”

Some 450 million people worldwide suffer from mental disorders, according to the World Health Organization (WHO), while an enormous gap exists between those who need mental health care and those who receive it.

During wars or following natural disasters, the proportion of people suffering from depression or anxiety—both normal reactions to traumatic events—often doubles or triples. In extreme situations, the whole population experiences increased anxiety or sadness. Most people get through it alone or with the help of friends and family. But for others, psychological or psychiatric care is necessary.

In crisis situations, MSF psychologists deal with the most urgent needs first. After the Haiti earthquake in January 2010, MSF staff offered emergency consultations to help patients overcome trauma related to the disaster while also providing treatment to people suffering from severe mental disorders.

Psychological distress can be hard to identify when it manifests as physical pain, and one of the tasks of MSF psychologists is to train other medical staff to recognize these symptoms. Patients often complain of nonspecific pains or come back several times without a proper diagnosis—one reason why it is so important to integrate the management of mental health care into other medical activities. “Psychological assistance can help HIV/AIDS or tuberculosis patients follow their treatment better,” says Gomez, “while in a nutrition center, a mother won’t be able to look after her child properly and ensure it puts on weight if she is suffering from depression.” MSF psychologists also provide counseling to victims of sexual violence in Democratic Republic of Congo and Guatemala, in addition to a wide range of other situations.