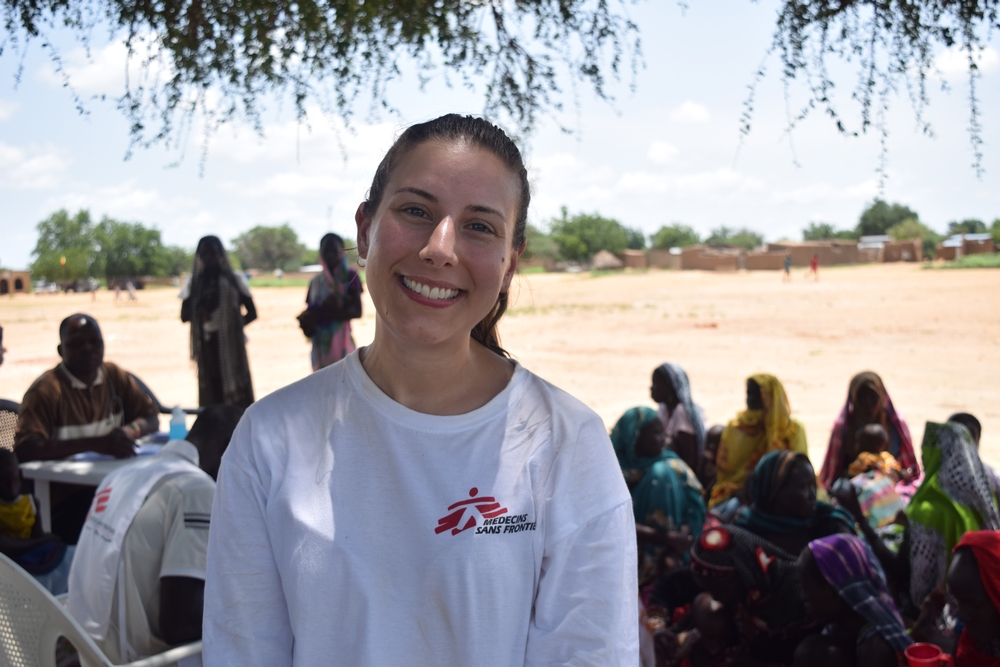 Andrea Kuehn, 30, from Vancouver, Canada, is an outreach nurse at Doctors Without Borders/Médecins Sans Frontières (MSF) mobile malnutrition clinics across the region of Bokoro.

I arrived in Bokoro, Chad, three months ago. It’s my first mission with MSF and I was so excited to finally get here. I have always wanted to work for MSF. This is my small contribution to make the world a better place. I knew Chad was going to be dry and hot and that there are very high levels of malnutrition here.

I am responsible for the 15 mobile malnutrition clinics we are running in 15 different villages. I oversee the team of nurses, registrars, and pharmacists and make sure everything's running smoothly.

When a child arrives at our clinic we measure their mid-upper arm circumference (MUAC). If the circumference of their upper arm is smaller than a certain length they’re admitted into our program. During every clinic visit, we re-measure their MUAC, we weigh them, check their appetite, and give the babies a nurse consultation.

We can also treat diarrhea, malaria, respiratory infection, parasites and worms, vitamin A deficiency, and eye infections. Malnourished children almost always have other diseases due to their lowered immune systems. We also provide ready-to-use therapeutic food, mosquito nets, and soap. If there are any really sick children I arrange for them to get transferred to the MSF inpatient therapeutic feeding center at the ministry of health (MoH) hospital in Bokoro.

The first time I went to one of the mobile clinics it was the one in the town of Bokoro. It’s one of the largest clinics we run in the region and we regularly see more than 400 children in one day. It was overwhelming and chaotic. I have never seen such a high number of very sick children in my life. Even with my background as a nurse in Canada, the level of acuity is astonishing. Now I have been here three months; the numbers are still extremely high and it is still shocking.

When I first arrived in May it was about 45 degrees Celsius [113 degrees Fahrenheit]. The extreme heat only adds to the everyday challenges of working here. And it affects our patients. If you have a sick child and they’re in the heat, they're much more likely to become dehydrated.

Right now it's the rainy season. You can see the corn and peanuts that families are growing but the problem is it probably won't be enough to get them through until next year.

Another issue is the lack of education about health and nutrition. Women are not breastfeeding their children long enough. There's no birth spacing between children so women tend to have one child and then they end up pregnant soon after with the next, and the mothers have a lot of misconceptions about breastfeeding. If they're pregnant they stop breastfeeding their older children, and then of course that causes malnutrition. Or they won't breastfeed multiple children at the same time. So often you'll see mothers come to our clinics and they have one child that's malnourished and then they have one healthy infant in their arms as well. Really they should be breastfeeding both.

The most difficult thing is seeing children suffering and knowing that we, MSF, are able to help, but that a lot of times the mothers and the fathers don't accept, or delay seeking the care we provide.

One day I was at one of our mobile clinics and a mother brought in a six-month-old baby girl. The baby had been sick for some time with fever and a cough and she was having difficulty breathing. Her parents had first taken her to a traditional healer. In an attempt to heal her, the healer had cut out the uvula at the back of the baby’s throat and they’d also cut lines into her chest. So the poor child was of course in pain and was refusing to breastfeed. Infection was setting in.

By the time she arrived at the MSF clinic she was tiny, very dehydrated, and the infection had spread to her entire body. You could see that her whole body was having to work very hard to make each breath. We needed to transfer the child immediately to MSF’s intensive care unit in Bokoro town. I remember sitting in the vehicle and just praying that this child would make it. It was the longest 45 minutes of my life. With every breath the child took I didn’t know if it would be her last.

Thankfully this child did make it to the hospital and a few days later I went to visit her and her mum. The child was no longer in intensive care. It was so good to see her improving and gaining weight. It was shocking to see both extremes – to see such a severely sick child and to see her recover so quickly once she got access to health care. 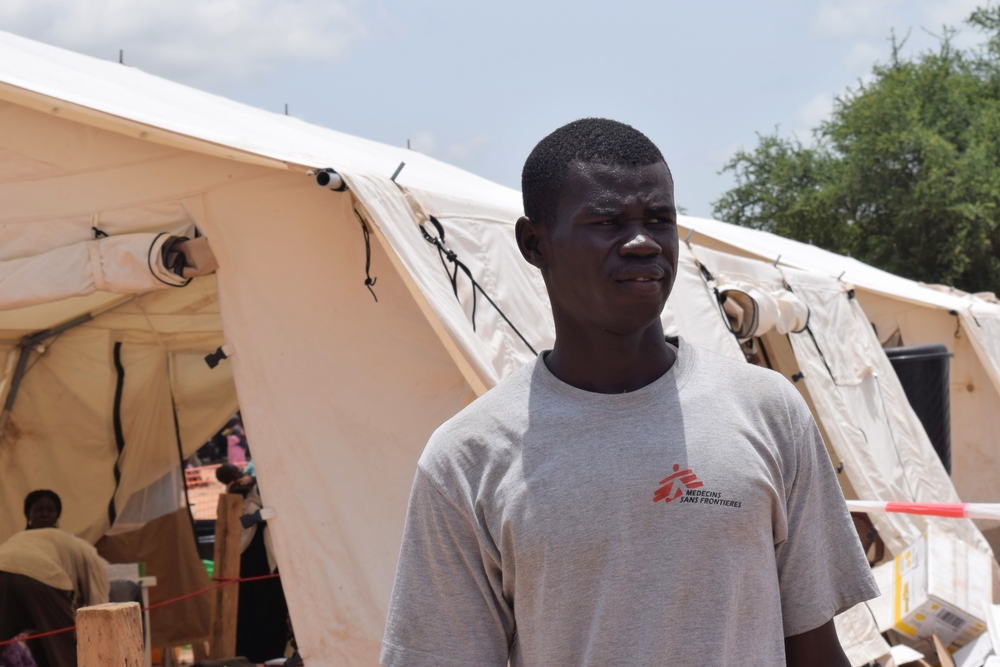 It’s my third year working with MSF. I saw what MSF does on the ground in Chad and I wanted to work for them. MSF is by nature a medical organization and I was concerned I wouldn’t have anything to offer, but I’ve studied hard and now that I’ve been given the opportunity to work here I bring all of the skills and experience that I can.

Currently, I’m a supervisor for MSF’s distribution program in Bokoro where we’re hoping to stop young children getting malnourished. The children who come to our distribution sites should be healthy, but are at risk of getting malnourished. For the first time in Bokoro this year, we’re giving these children rations of specially formulated supplementary food and giving them a chance to stay healthy.

It’s a really varied project so we have nurses measuring the upper arm circumference of all the babies, triaging people, and looking after any of the babies that turn up ill. But ultimately it’s a prevention project, so this means there are a lot of non-medical tasks too, such as distributing the soap, mosquito nets, and supplementary food. Mums also receive a short education lesson about hygiene and nutrition.

The work is hard. We have to travel a lot and long distances and the state of the roads often aren’t good. When we arrive, the women and their babies are always waiting for us so we make sure we’re out of the MSF base by 6:30 a.m. every day. We can’t leave people waiting in the heat, so this also means there’s no time to take a lunch break. We arrive in the villages early and we keep working until all the mums have everything they need.

Now we’re in the rainy season and often we arrive at the sites and it starts pouring with rain. We can’t leave the women and babies in the rain either, so we have to be out in the rain with them, showing them that it’s important and worthwhile to be here. On top of this, the local village leaders expect a lot from us.

One day a grandmother turned up at the distribution site with an 18-month-old child who was really ill. He was very malnourished and had diarrhea and vomiting. The child’s dad had died three days earlier. We took the child to MSF’s intensive care unit in Bokoro and a couple of days later the mum also died. I couldn’t believe it. The grandmother stayed with the child in hospital but she was very old and had a lot of health problems herself.

I was really worried about what the child’s future was going to look like and I made the most of our relationships with the local community leaders to see whether there was anyone in his village who could adopt the child. The child recovered from his illness and was discharged from the MSF hospital. This was so good to see but I still call the community leaders occasionally to check the child is doing okay. Recently I haven’t had any news. I’m really hoping that one day we can find the child again because I want to make sure they get registered in our distribution program. Sometimes women travel long distances to come to our sites and travel between villages so I’m always on the lookout for them. 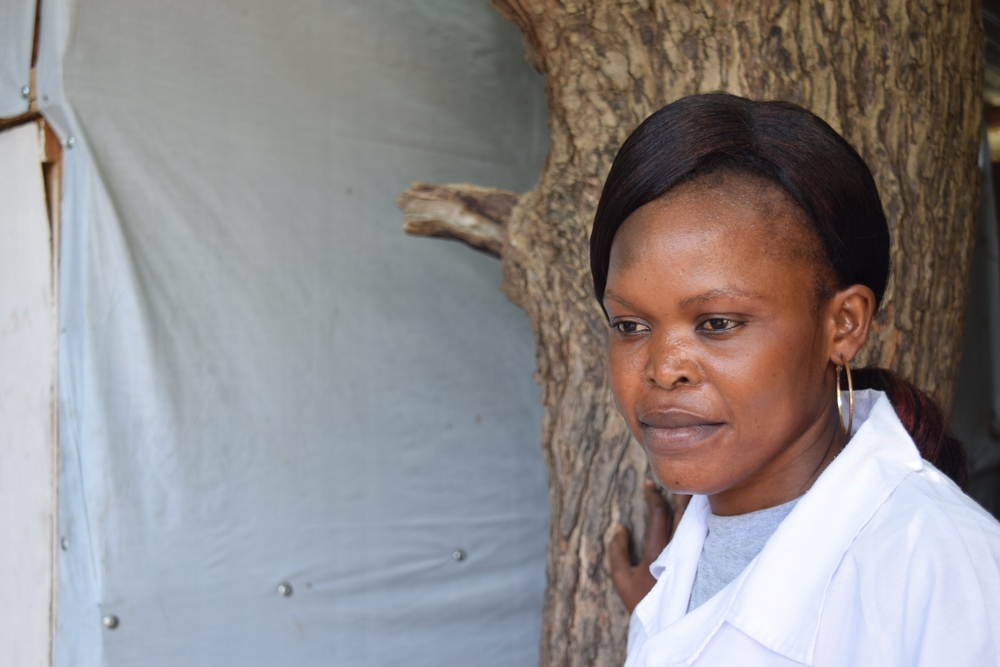 Benedicte Latoumbayle, 28, from Bokoro, Chad, is a nurse at MSF’s therapeutic feeding center and intensive care unit in Bokoro.

I started working with MSF four-and-a-half years ago. As a Chadian, I saw what my people were going through and MSF’s principles of helping people in distress really resonated with me. I’m very happy that I get to help my people.

I arrive early in the mornings and check all of the children’s vital signs. We do this every hour, as many of the children in the therapeutic feeding center are very ill, and for the really ill ones we check on them every 10 to 15 minutes. From the moment I get here I’m really busy. I arrive at 7:30 every morning and, apart from a short break for lunch, I don’t stop until 5:30 p.m. If you waste any time, this can have terrible consequences for the health of the children. A malnourished child that isn’t well can fall into death very quickly.

There is a serious problem in this region with malnutrition. There isn’t enough to eat. Here in the desert it’s not good for growing food. Women’s husbands often leave them here alone while they travel to other parts of the country to find work, but before they return it’s hard for the women and their children.

But it’s also because of harmful customs and traditions. Some mums here say that when their child is born, their breastmilk isn’t any good. They think that breastfeeding will harm future children in their womb. To fight malnutrition here, education is key.

Sadly, a child died today. When the child arrived he had very bad malaria. At home they had given him something to eat as part of a traditional medicine procedure [that] had poisoned him. When the child arrived here at the clinic we did everything we could. It hurts a lot to see a child like that. The only thing I can say to the mum is that the reason your child died is because of what you gave it to eat. And sometimes the mums tell us that their other children went through the same traditional procedure and they’re also ill at home. Then we have to go and find the other children straight away and bring them to the hospital too.

It’s miserable to see so many children suffering in front of you but it’s also this that motivates me to keep going and to help them. I have a daughter of my own who is 19 months old. She’s healthy but it can be difficult seeing children the same age that are so ill. I want my daughter to exceed me. I’m a nurse but I think with the right support and strength she can do even better than that.

I think everything MSF has done for malnourished children here is amazing. There isn’t a health center in Chad that would be able to take responsibility for all these ill children. They don’t have the expertise or resources. It’s not an easy job.

Video: Inside MSF’s Emergency Response to the Turkey-Syria Earthquake