MSF has strengthened its treatment capacity in Taï and Duékoué hospitals in preparation for a possible influx of wounded patients. 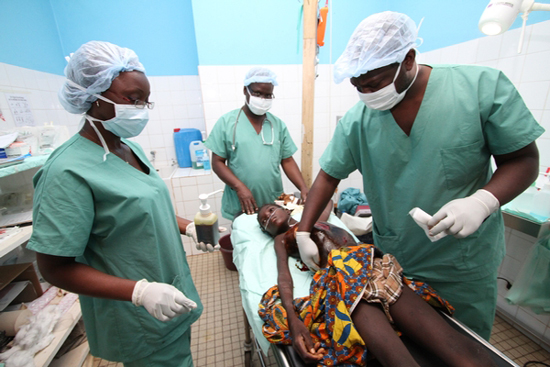 MSF staff tend to a young patient Duékoué hospital, where MSF is strengthening treatment capacity in the wake of renewed violence.

PARIS/ABIDJAN, JUNE 15, 2012—Following new attacks earlier this week near Taï, at the Liberian border, Doctors Without Borders/Médecins Sans Frontières (MSF) has strengthened its treatment capacity in Taï and Duékoué hospitals in preparation for a possible influx of wounded patients. Health care workers and a portion of the population have already fled the fighting in the area south of Taï, leaving critical gaps in access to medical care.

Over the last few months, MSF has observed a worsening of the security situation in western Ivory Coast. Regular cross-border attacks by Liberian militias have intensified since June 7, when an attack against a joint Ivorian Armed Forces (FRCI) and UN forces patrol left 18 people dead, including seven Nigerien peacekeepers. Fighting continues in some villages south of Taï.

“We are very worried about this situation,” says Issiaka Abou, MSF’s head of mission in Ivory Coast. “People are afraid and are fleeing their villages. We are also concerned that the populations lack access to medical care because there are not many health centers in this region and they are poorly equipped. The health-care workers may also be fleeing with the rest of the population.”

On June 12, MSF treated four gunshot victims in the Taï hospital, who were transferred to the Duékoué hospital for surgery. Residents are fleeing the entire area from Taï to Tabou, heading north, after the area was declared a militarized zone. UN and Ivorian armed forces have increased their numbers there to prevent new attacks, while neighboring Liberia closed its border (primarily along the river).

For obvious security reasons, nongovernmental organizations are strongly discouraged from traveling along the southern Taï/Tabou route. It is difficult for humanitarian organizations to work in that isolated, forested region because of the widespread insecurity, but also because the roads are in very bad condition.

More than 4,000 people have already taken refuge in the village of Taï. Most have been taken in by families. The hospital there is the only one in the north of militarized zone. Sporadic incidents have occurred in recent months in this area and MSF has already treated the wounded at the hospital.

“To date, we have seen several wounded patients who arrived, on their own, from the villages south of Taï that came under attack,” said Abou. “When fighting is underway, we cannot bring in the wounded ourselves and rely instead on the Red Cross ambulance system.”

For now, MSF has increased its treatment capacity at the Taï hospital in the event of an influx of wounded patients.

“The hospital has emergency supplies to treat approximately 100 patients,” Abou explains. “We have also increased our ability to transfer patients so that we can send people with life-threatening emergencies to the Duékoué hospital.”

The Taï hospital has only about 20 beds and does not have an operating room. All patients who require emergency surgery will be treated at the Duékoué hospital, where the MSF teams have implemented an emergency plan.