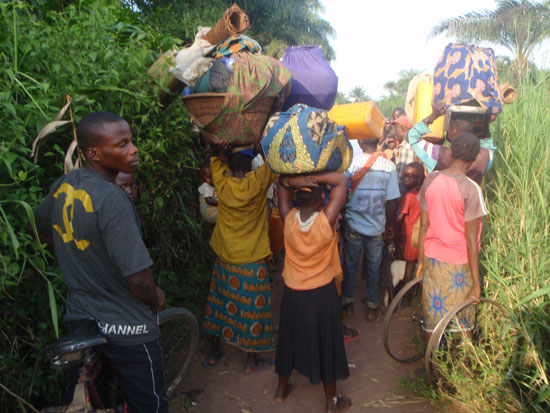 Renewed conflict in northerwestern DRC has so far caused 34,000 refugees to flee to neighboring Republic of Congo in search of safety.

A recent upsurge of violence, sparked by inter-community conflicts in Equateur Province in the northwest of Democratic Republic of Congo (DRC), has forced 74,000 people to flee their homes. Many have headed for the country’s interior, while others have taken refuge across the border, in the Republic of the Congo, where their health remains in peril.

A massive torrent of people are fleeing Equateur Province in northwestern DRC after a simmering dispute over farming and fishing rights in the town of Dongo escalated into an all-out violent clash in late October. According to a United Nations report, around 100 people were killed in the initial battle while houses, shops, and other buildings were destroyed. The conflict quickly spread to nearby villages and renewed fighting flared up on November 17 in the village of Saba Saba. The residents and others already displaced following the fighting in Dongo had to run for their lives, leaving behind a number of dead, burnt buildings, and a wave of looting, according to an assessment conducted by Doctors Without Borders/Médecins Sans Frontières (MSF).

More than 40,000 people are heading for the interior provinces of the DRC. MSF’s medical teams have met individuals who walked four days non-stop to escape the fighting. At the end of their journey, these people are destitute. The wounded go without treatment because healthcare is too expensive, and they fled their homes with their pockets empty.

Across the border to neighboring Republic of Congo, at least 34,000 people have crossed the vast Congo River to seek refuge in the northern district of Likouala, where MSF has launched an emergency response and organized several mobile clinics. The refugees are scattered along the river in small groups, and the MSF teams travel by canoe to reach them.

"Around 800 people are staying on an island between Dongon Zaire and Eboko, because they are so scared of reprisal"

"Around 800 people are staying on an island between Dongon Zaire and Eboko, because they are so scared of reprisals," says Salha Issoufou, MSF’s emergency coordinator. "They belong to one of the communities involved in the conflict, and cannot move around to find assistance. An MSF team will go there to bring them assistance."

Even after food distributions from the World Food Program got underway on November 25, the health conditions of the refugees continue to be critical. The most common ailments observed in the MSF clinics are malaria, respiratory infections, and diarrhea. Around 100 people have come to the MSF mobile clinics; a third of these patients are children under five.