Since August 25 more than half a million Rohingya refugees have arrived in Bangladesh following a wave of targeted violence in neighboring Myanmar’s Rakhine state. Most of the newly arrived refugees have moved into makeshift settlements without adequate access to shelter, food, clean water, or latrines. Doctors Without Borders/Médecins Sans Frontières (MSF) water and sanitation expert Paul Jawor recently returned from southeast Bangladesh. Here he describes the terrible conditions refugees face and the solutions MSF is implementing to provide them with sufficient clean water in Unchiparang, one of the settlements.

I have rarely seen so many people, hundreds of thousands, living in makeshift shelters, stranded in an area the size of a small European city, and with very little access to basic services. Assistance is being rolled out, but the needs of the refugees, especially access to … clean water, are still extreme. In Unchiparang, one of the settlements where MSF is providing health care, access to water is horrendous. The 33,000 people living there only drink untreated surface water, which they collect from [rice] paddy fields, puddles, or hand-dug shallow wells. Many of the rare latrines available are already overflowing, so people have no choice but to defecate in the open, further polluting the water.

From a geological perspective, Unchiparang has different features; [there is] some flat land with hills in the middle of the settlement. There’s a small river running through [the settlement], but only some of the refugees on one side of the hills have easy access to it. The ground is a very heavy, impermeable clay and gets very muddy and wet when it rains. The aquifer is not deep, and if you dig too much, you very soon tap into salty water due to the proximity of the sea. 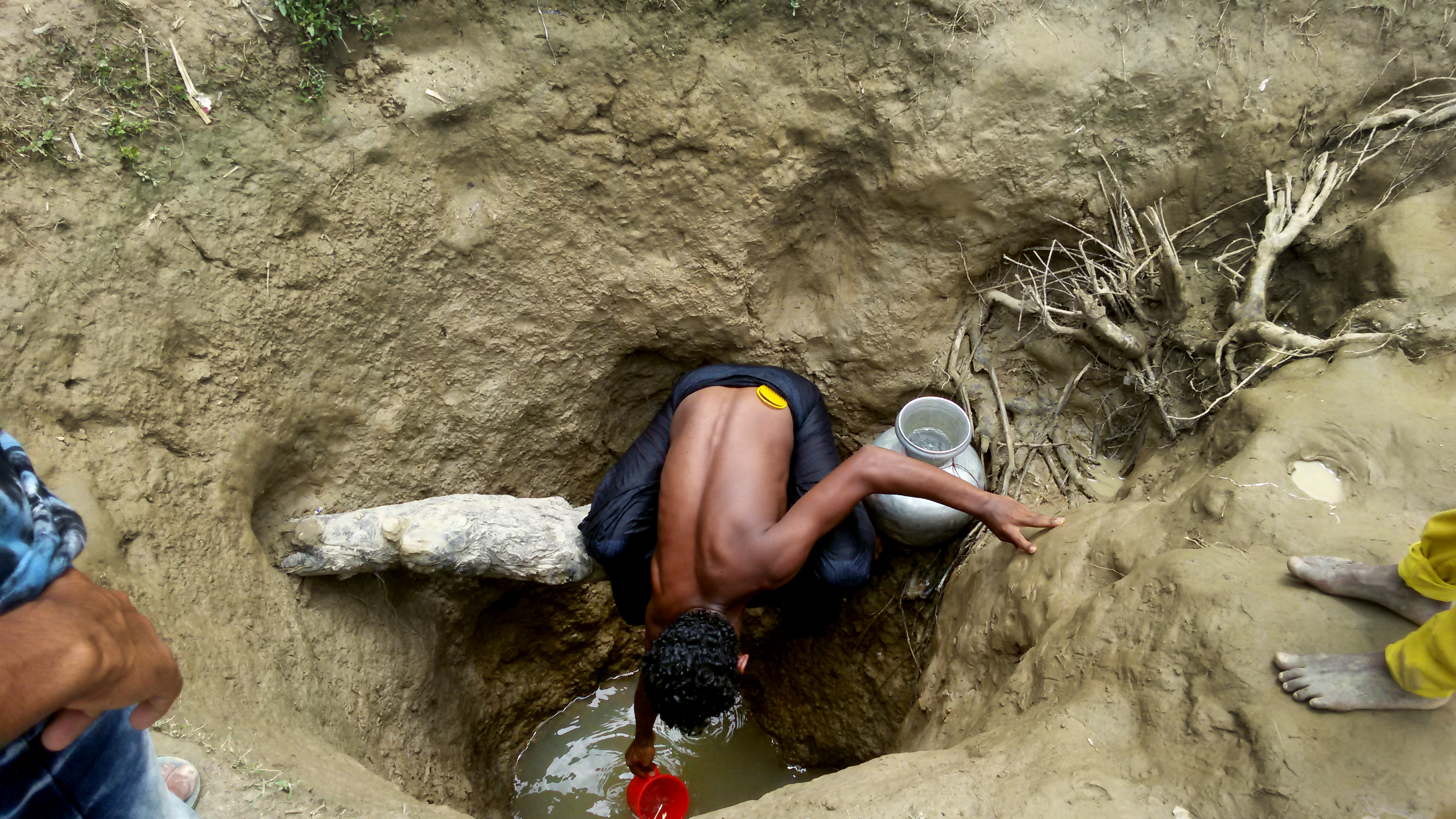 Our priority, as always in such situations, was to ensure that clean and drinking water was available in the clinic we have set up in the settlement. We need to guarantee that the health structure is not a place where people can be [exposed to] other diseases, notably diarrheal diseases. The medical staff needs to be able to clean their hands and material; patients need to be able to take their drugs with a glass of clean water.

We have managed to make use of the main source of water, the river. Our teams have led a campaign to sensitize the population not to contaminate the river and [have] installed a long pipe leading to huge tanks that could deliver up to 30,000 liters of chlorinated and clean water per day. That’s really under the standard [requirement] for such a large population, but we are adding more water capacity as we speak, especially for people who have settled far from the river.

Read More: In Bangladesh, Scaling Up Response to a Humanitarian Crisis

In other locations, we will be using the traditional borehole in the ground technique, but making it bigger and safer. We have started to dig such infiltration wells, up to two meters [about 6.5 feet] in diameter and up to five meters [about 16 feet] deep, with the objective of having 15 to 20 soon. They will have concrete platforms to avoid letting dirt in, a little wall to stop flood water, and a lining inside to stop surface water from contaminating it. And of course the water will be chlorinated.

The main difficulty, with such a large area and population to cover, is to choose where to dig the boreholes. We have looked at our clinic’s medical records and identified locations where many of the diarrhea cases are coming from with our health promotion teams. The most vulnerable and most at-risk families living near the future wells will also receive jerry cans [and] a hygiene and disinfection kit. And it’s also key that the community is fully involved. MSF’s health promotion team will help and train them on how to chlorinate the water and maintain the water systems.

With the dry season coming, and more refugees coming in every day, access to water will remain a main concern in all settlements. In Unchiparang, the river running through the settlement will dry up, as it does every year, in two or three months, and the boreholes will provide less and less water per day.

It is important that MSF and other actors anticipate and put in place water systems that can sustain the dry season. One of the things we plan to do is to build four "swimming pools" in the Unchiparang settlement. We call them that not because people can swim in them but to give an idea of their size. They are seven by seven meters [about 23 feet] and four meters deep [about 13 feet], and can contain 200 cubic meters [over 7,000 cubic feet] of water. They catch both rain and underground water. This is not a new or a foreign idea. Such tanks are present in every mosque and in some private houses in the area. And MSF has built such systems in other emergency interventions, for instance in Myanmar, after Cyclone Nargis devastated the Irrawaddy Delta area in May 2008.