A new study published by PLoS based on MSF's work in Niger shows the impact supplemental feeding programs have during nutrition emergencies. 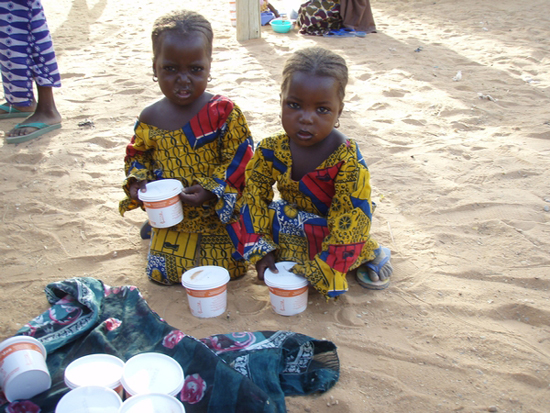 Previous studies have shown the benefits of ready-to-use supplementary food (RUSF) distribution in reducing the incidence and prevalence of severe acute malnutrition.

To compare the incidence of wasting, stunting and mortality between children aged 6 to 23 mo participating and not participating in distributions of RUSF, we implemented two exhaustive prospective cohorts including all children 60 cm to 80 cm, resident in villages of two districts of Maradi region in Niger (n = 2238). Villages (20) were selected to be representative of the population. All registered children were eligible for the monthly distributions between July and October 2010. Age, sex, height, weight, and Mid-Upper Arm Circumference (MUAC) were measured at baseline and two weeks after each distribution; the amount and type of distribution and the amount shared and remaining were also assessed. We compared the incidence of wasting, stunting, and mortality among children participating in the distribution (intervention) of RUSF versus children not participating in the distribution (comparison). The absolute rate of wasting was 4.71 events per child-year (503 events/106.59 child-year) in the intervention group and 4.98 events per child-year (322 events/64.54 child-year) in the comparison group. The intervention group had a small but higher weight-for-length Z-score gain (−0.2z vs. −0.3z) and less loss of MUAC than the comparison group (−2.8 vs. −4.0 mm). There was no difference in length gain (2.7 vs. 2.8 cm). Mortality was lower for children whose households received the intervention than those who did not (adjusted HR 0.55, 95% CI: 0.32–0.98).

Short-term distribution with RUSF for children 6 to 23 months improve the nutritional status of children at risk for malnutrition. Fewer children who participated in the RUSF distribution died than those who did not.