Sierra Leone: Seeking to Improve Access to Healthcare for Women and Children

MSF welcomes Sierra Leone's move to offer free maternal and child healthcare and hopes this will improve access for these vulnerable groups. 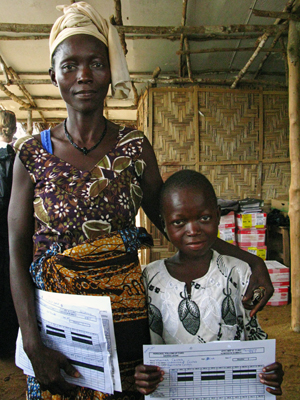 A mother with her son after the boy got a check up at a malnutrition program run in an MSF clinic in Sierra Leone's Bo district.

On the April 27, the government of Sierra Leone will start implementing a policy of free healthcare for pregnant women, breastfeeding mothers, and children under the age of five. Doctors Without Borders/Médecins Sans Frontières (MSF) welcomes the government’s commitment to the new policy and hopes that this will improve access to healthcare for these vulnerable groups.

“We are extremely happy that the Sierra Leone government has decided to stop asking pregnant women and children to pay for health care,” said Stuart Zimble, MSF’s Head of Mission in Sierra Leone. “In a country facing such enormous health issues, the increased use of health services must be a priority objective.”

Sierra Leone is still an extremely impoverished country that ranks near the bottom of many health indexes. One in four children dies before the age of five, and one in eight women risks dying from complications of pregnancy and childbirth. More than half of the population survives on less than one dollar per day.

MSF has been working in Sierra Leone since 1986. In the town of Bo, MSF runs a hospital that provides maternal and child healthcare. The hospital has an intensive therapeutic feeding center for malnourished children, a pediatric ward, and a maternity ward with an operating theater focused on complicated pregnancies. MSF also provides support to the Ministry of Health in five health centers and thirty rural health posts in the area.

MSF’s experience in Sierra Leone and other poor countries has shown that patient fees act as a major barrier to accessing life-saving healthcare. The number of children diagnosed and treated for malaria increased tenfold after MSF made healthcare free of charge—even when the fees previously requested were very low.

“Although free care might not resolve all the problems that limit the access to health care for these vulnerable groups, it will remove one significant barrier,” said Zimble.

He added that the implementation of free care for vulnerable groups is a challenging task: “The policy can only become a reality if the necessary drugs, equipment and health workers are consistently available even in the most remote health structures. Meeting this challenge will require continuous efforts in the coming months and years.”

Zimble concluded: “MSF has witnessed the efforts made by the Sierra Leone authorities in making the implementation a success. We also hope that they will receive appropriate and continued support from aid partners so that the policy will translate into better access to health care for the people who need it the most.”