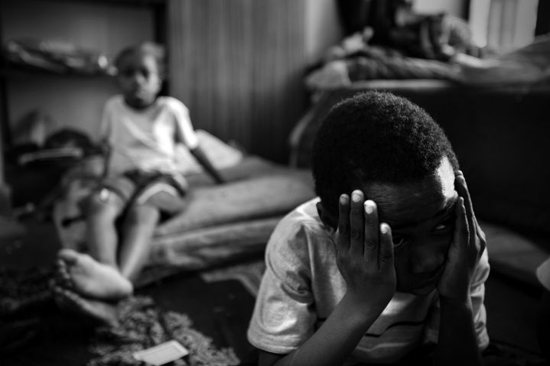 These children of migrants live at Central Methodist Church in Johannesburg, which is housing 1,200 to 1,500 migrants, most from Zimbabwe. MSF runs a health clinic next to the church.

In December 2007, Doctors Without Borders/Médecins Sans Frontières (MSF) began providing essential health services to Zimbabwean migrants in the South African border town of Musina, Limpopo province, and in central Johannesburg. It is estimated that more than one million Zimbabweans live in South Africa.

A mobile medical team near the border

Zimbabwean migrants in this area generally work on farms or as informal laborers, earning money for their basic needs and to provide for their families still residing in Zimbabwe. Oftentimes, fear of deportation and abuse prevents them from utilizing the public health service. This means that chronic infectious diseases, such as tuberculosis (TB) and HIV/AIDS, often go unchecked, and medical needs, such as emergency obstetrics, leave women vulnerable. 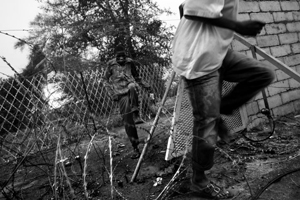 Boys jump the Zimbabwean-South African border into Musina-Beitbridge. Their plan is to get jobs in Johannesburg so they can support their families back home in Zimbabwe.

The South African constitution guarantees access to health care to all those who live in the country, including migrants. Zimbabweans are at present the largest migrant group in South Africa. With unemployment ranging from 25 to 40 percent in South Africa, this group is increasingly seen as intruders. This creates more obstacles to the migrants receiving health care, which exacerbates the traumas they’ve already endured.

“Zimbabwean migrants face major risks, including sexual violence, physical and verbal abuse, and police harassment when crossing the border,” says Sylvie Kaczmarczyk, MSF field coordinator in Musina. “And it continues in South Africa, where many are unable to find sustainable employment.” These factors, together with their unclear legal status, lead to a very precarious situation, which affects physical and mental health.

The MSF team provides health care on commercial farms on the eastern border of Limpopo, and has fixed consultation points in Musina township in Happer, Campel, and Matswale. In the first quarter of 2008, there were more than 800 consultations each month. Headache, respiratory illnesses, skin infections, and sexually transmitted infections were among the main complaints. 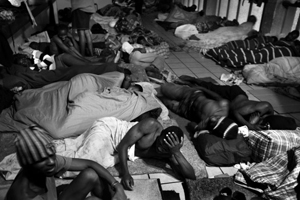 Men sleep crowded on the floor at Central Methodist Church in Johannesburg.

The MSF health facility in Johannesburg is next to the Central Methodist Church, which is a shelter for 1,200 to 1,500 migrants, mostly Zimbabwean nationals. An existing health-care facility was operated once a week by volunteer health workers, but the need for medical care for migrants, as well as medical referrals to public health services, led MSF to establish a staffed facility. The team provides basic health care and refers patients for specialized medical treatment.

In the MSF waiting room, a mother of a seven-month-old baby speaks of the conditions she has faced and the reason for coming to MSF: “I came to South Africa with only the clothes I was wearing; the women at the church gave me clothes for my baby. My baby has not been immunized; I have been to three clinics in Johannesburg since December 2007, and no one wants to immunize my baby. I came here to MSF because my baby needs his vaccinations and I’m worried that he may not be able to walk one day.”

This facility serves a migrant community concentrated in and around the church, where there is limited sleeping space, poor ventilation, and unhygienic conditions as a consequence of overcrowding. The church is considered by most of the people who are staying there as their only safe haven, but recently, this sense of safety was threatened: on January 30, the South African Police Service conducted a raid on the church, during which police officers physically assaulted and arrested most of the residents. 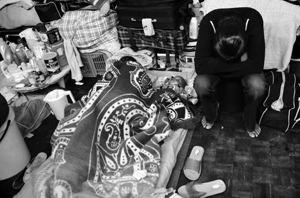 Women are surrounded by all of their belongings at the Central Methodist Church, where they are living with more than 1,000 other migrants, most from Zimbabwe.

The migrants coming to MSF are traumatized by the ordeal of crossing the border and by the situation they face in South Africa. It is difficult to find work, and there is a real fear of deportation. The primary health care that MSF provides at the facility therefore includes individual and group counseling. Presently, there are three weekly counseling support groups: a "raid aftermath" group; an HIV group, and a men’s group. Groups for teenagers and adolescents and for mothers are planned to begin this month.

The majority of patients the MSF team in Johannesburg sees are male Zimbabwean migrants who live at the church. “From January to March, most of the patients we saw came for upper-respiratory tract infections and pain, and we noticed a steady increase in the diagnosis of sexually transmitted infections,” says Bianca Tollboom an MSF nurse.

Between January and March 2008, the MSF team conducted a total of 2,895 consultations and made 294 clinical referrals for HIV, TB, and other chronic diseases. In February and March, the team held 369 individual counseling sessions.