South Sudan: Emergencies Unfolding One After Another

MSF is scaling up its response in South Sudan to an influx of refugees and working to prevent malnourishment in the face of a possible food shortage in Northern Bahr al Ghazal State. 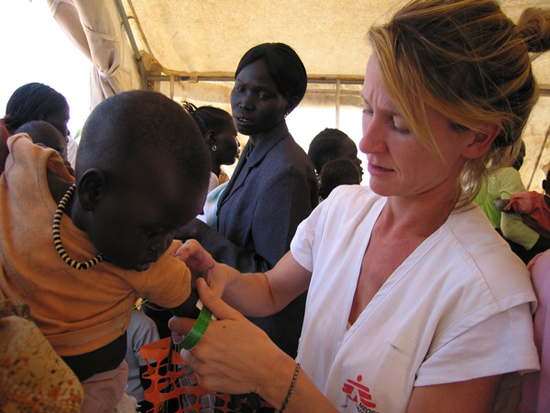 Six months after the birth of South Sudan—the world’s newest independent country—a series of emergencies are unfolding that require urgent humanitarian responses. Doctors Without Borders/Médecins Sans Frontières (MSF) has scaled up into full emergency mode in Upper Nile State to respond to the sudden influx of thousands of refugees fleeing conflict in neighboring Sudan; while around the town of Agok in Northern Bahr al Ghazal State, where displaced and resident populations are facing the specter of a food shortage, MSF has launched a preventive supplementary feeding program for children at risk of becoming malnourished in the months ahead.

The 22-year war that ended in 2005 left South Sudan’s healthcare provision in a perilous state that could be described as an emergency in its own right. Now, in the contested area of Abyei between the two Sudans, fresh conflict has pushed the local population to escape southwards, resulting in an estimated 100,000 displaced people. Other conflicts across the border in Sudan—particularly in Blue Nile and South Kordofan states—have forced tens of thousands of refugees to flee across the border over the past month, and they are still coming. The burden of these multiple situations is heavy, and aid organizations need to move onto an emergency-response footing.

Refugees in Urgent Need of Assistance

MSF launched an emergency response in the refugee camp in Doro, in Maban County, on November 28. The camp’s population has now reached 25,000, and families continue to make the long journey by foot from Sudan’s Blue Nile State.  MSF immediately started providing primary health care and digging latrines. The team’s water and sanitation workers also fixed water points and installed a 15,000 liter water bladder to reduce the waiting times of up to 12 hours that were making life miserable for the women and girls responsible for filling their families’ plastic jerry cans.

Medical consultations have revealed a consistent pattern of malaria, respiratory tract infections, and diarrhea among the new arrivals, who have, in some cases, been walking for weeks to reach safety. “When they arrive in Doro, in terms of their nutritional status, their immunity is down so they will not react for malaria and other diseases in the same way as a healthy person,” says Dr. Asaad Kadhum, emergency coordinator.

To date the team has performed more than 1,500 outpatient consultations, and is currently setting up an inpatient facility in the camp to treat more seriously ill patients. In the coming days there will be a measles vaccination campaign to make sure all children under 15 years old are vaccinated.

Near the village of Alfuj, to the north of Doro and close to the border, many thousands of Sudanese from another part of Blue Nile State have gathered with their belongings under the sparse trees. Their exact numbers are still unknown. After a rapid assessment MSF started emergency distribution of BP-5 emergency nutrition biscuits to children under five years old and, on the day of the first visit, treated 150 of the most urgent cases of diarrhea, respiratory diseases, and malaria.

These families told MSF that they had been on the move since September—initially hiding in forests near their crops but eventually fleeing across the border after three straight days of fighting convinced them it was no longer safe to stay. They expressed two urgent needs: for food and for health care. A local nurse among the refugees was doing his best to keep a clinic running under a tree but he had no medications to offer.

The MSF team will return regularly to this group to provide emergency food and a mobile clinic.

The unfolding food emergency has additional causal factors quite apart from added burden of returnees, refugees, and internally displaced South Sudanese. There has been widespread crop failure, flooding, trade disputes, and inflation in the local markets. Families are sometimes unable to find anything to eat.

“If nothing is done, the situation could become dramatic,” said Ines Hake at the conclusion of her 11-month assignment as medical team leader at the MSF hospital in Agok. Hake took part in the assessment that prompted MSF to start preventive supplementary feeding for 20,000 young children.

The survey found that 65 percent of households in the region were accommodating family members displaced by the conflict in Abyei. “In this already impoverished region, there are now many more mouths to feed,” Hake worries.

“For the moment, the lives of the children that we are targeting are not in immediate danger,” Hake explains. The aim of preventive supplementary feeding is to reduce the chance that children become so malnourished that they will require therapeutic feeding or, worse, hospitalization.

Nurse Sita Cacioppe has witnessed the tragedy of full-blown food crises. Her previous field assignments with MSF have included working in an emergency malnutrition program in Chad, and more recently in the overflowing camps in northern Kenya where malnourished Somalis sought refuge from violence and food shortages.

The difference in this emergency intervention is that it’s all about avoiding what would otherwise be inevitable without assistance. “If we can prevent malnutrition now before it kicks in, we’re preventing kids dying,” she said, adding that her own motivation is “to try and prevent us from coming out onto the field and finding hundreds of actually starving children.”

Médecins Sans Frontières has been working in South Sudan since 1978. More than 2,000 South Sudanese staff work alongside almost 200 international staff in more than a dozen projects covering eight states.