Many of those affected are already been displaced and living in dire conditions. In Malakal, more than 6,600 people have fled their homes to seek shelter at the United Nations Protection of Civilians (PoC) base. Meanwhile, in Melut, a town north of Malakal, more than 1,665 families have sought refuge across the Nile River since the beginning of April.

MSF has repeatedly called on all parties to the South Sudanese conflict to allow for necessary humanitarian access to all parts of the country.

The security situation in Upper Nile remains unstable. Mistrust between communities leads to clashes, with profound humanitarian consequences. People are constantly on the run, but the areas to which they flee do not offer favorable living conditions. In states like Upper Nile, some people have been forced to flee so many times that they no longer have a place to call home.

This new wave of displacement, sparked by clashes at the beginning of this month, is putting pressure on the capacity of humanitarian agencies currently working in the area. A total of 26,500 internally displaced people have sought shelter at the UN base in Malakal since the beginning of the conflict in December 2013.

The new arrivals are living in big tents, with dozens of families sharing quarters and sleeping on the floor. MSF continues to provide medical services at the UN base hospital. Other agencies are on site to ensure sufficient water supply and proper sanitation, but the increasing numbers of displaced people is straining the few existing resources.

"The rainy season is just setting in and with the congestion in the PoC, we have started to see open defecation, long queues at water points due to low water quantity and pressure," said Juan Prieto, MSF head of mission in South Sudan. "Cases of acute diarrhea are increasing, so we are reinforcing our surveillance measures to ensure that outbreaks are prevented. Last year, MSF launched a cholera intervention and vaccination campaign in the camp, and we are ready to replicate actions if needed. However, we are afraid that if fighting continues, there will be more displacement, further congestion in the PoC, and a deterioration of health and general living conditions."

In Melut, more than 1,665 families—mostly ethnic Shulluk, who were previously displaced and living in a camp—have fled to the west side of the Nile, most to the Noon area. These families are living under trees, with extremely limited access to latrines. They must travel long distances to fetch water from the Nile that, unless treated, is not safe to drink. Other families are scattered all over the west bank of the Nile in Kaka, Kuju, and Toruguang Payams, some 80 kilometers (approximately 50 miles) away from Melut. With no shelter either, the food stocks families managed to salvage when they moved are dwindling. 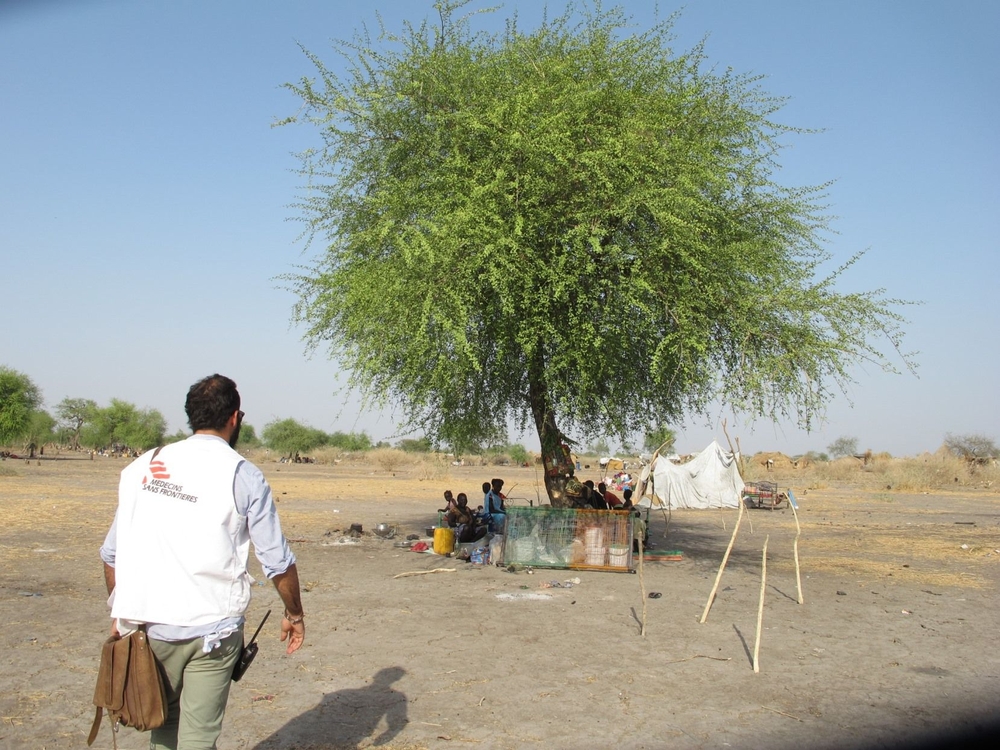 "The biggest problem is water," said 17-year-old Teresa, a Shilluk who recently fled to Noon. "I have to go to the Nile three to four times a day. It is a 25-minute walk each way. We are worried for our lives and for the future, if we survive."

MSF is supplying each family with water treatment kits, as well as transporting food and non-food items by speedboat and donkey to families scattered in different parts of Noon. MSF also regularly conducts mobile clinics with outpatient and emergency room services for the population in Noon, referring acute medical cases to health facilities in the towns of Melut and Kodok.

In Melut, MSF treats an average of 150 patients a day for diseases like measles, acute watery diarrhea, and respiratory tract infections. However, due to continued fighting in the area, MSF is sometimes forced to suspend its activities as a preventive measure, leaving the population in an even worse position.

"The people here have been on the move since the war started," said Joao Martins, MSF project coordinator in Melut. "They have nowhere to call home anymore, as insecurity has made them nomads, moving from one place to another in search of safe havens to stay. Whenever clashes start, they are prompted to move. Children under the age of five years and pregnant women are especially vulnerable during these times."

As more people are displaced, some to remote areas where they have hardly anything to live on, MSF calls upon all armed groups to facilitate the free movement of humanitarian assistance and personnel to all parts affected by the South Sudanese conflict.

MSF has been working in the region that today constitutes the Republic of South Sudan since 1983. MSF responds to emergencies, including large-scale displacement, refugee influxes, alarming nutrition situations, and peaks of diseases such as measles, malaria, acute watery diarrhea, and kala azar, in addition to providing basic and specialized health care services.

Since conflict began in South Sudan in December 2013, two million people have been displaced from their homes. Some live in camps, while others have fled across the border to neighboring countries of Kenya, Uganda, Ethiopia, and Sudan.

Continuing clashes in Upper Nile state in South Sudan are leading to more deaths and displacements of people. Over 1,665 families, mainly from the Shilluk tribe, have left Melut since the beginning of April and sought refuge in Noon, across the river Nile. They live under trees and have extremely limited access to latrines, leading to open defecation and have to travel long distances to fetch water from the Nile.
Beatrice Debut/MSF