Since May 13, Doctors Without Borders/Médecins Sans Frontières (MSF) teams in Oromiya and Southern Nations and Nationalities People's regions (SNNPR) in southern Ethiopia have been scaling up nutrition activities in response to an alarming rise in malnutrition. Here are five MSF patients’ stories. 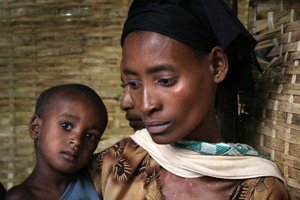 “One of my children died because we had nothing to eat at home. Today, I am coming to MSF in Tunto to see if my other child can be admitted into the outreach therapeutic program.

My husband is a farmer. He grows maize and ginger. Maize is for the family; ginger is to sell. With the income of ginger sales, we normally can buy some additional maize from the market. But this year the price of ginger is very low and at the same time, the price of maize has risen and has become too expensive. It has become difficult to buy maize to feed the family.

In addition, we had a serious drought here. During several months there were no rains. This is also why the price of maize has so much increased. Most of the time, we used to get some maize and potatoes on the market. Today, there is maize on the market, but it is just too expensive. We have received some rations from the Kebele authority, but now it has stopped.” 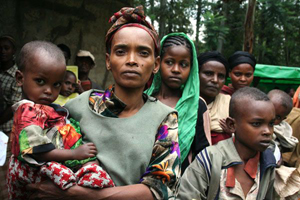 “Five years ago, my husband married another woman and left me alone with the children. I have seven children at home, and there is no food. I hope to get something here at the MSF program because there is not much other food available for me and my children. I am getting a bit of food from relatives; they are helping me.

We have a little piece of land to cultivate ensete (a nutritive root crop) and coffee. I can harvest some coffee, but it is not to eat and I can’t even sell it on the market. I have never received any food assistance. I don’t know how to feed my children; I have no capacity, but with the help of God my situation may improve. When my four sons get older, they may be able to help me get food for the family.” 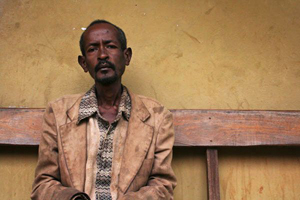 “I am not able to work in a field. I am hungry. I have six children and I have to find food for them. I was admitted to the MSF program three weeks ago. I am receiving Plumpy’nut (a nutrient-rich, ready-to-use therapeutic food), oil, and CSB (a blend of corn and flour). I have nothing to eat for myself. My children are lacking food too, but are not in the MSF program. I am a farmer. I cultivate coffee, ensete, bananas, and some fruits, such as mangos and papayas. But this is too little for my family; I have many children. My wife takes care of the children and normally she cooks ensete and potatoes. The past years, you could get food from the market, but this year the prices have increased. If MSF did not open its nutritional program, a lot of people would have died. You have saved a lot of lives. The problem this year is also the lack of rains—the drought. We have got poor harvests from our land. Also, the price of fertilizers has increased: one quintal (about 100 pounds) of fertilizer, for instance is now worth up to 800 ETB (about 80 dollars). I have received twice 50 kilograms (about 100 pounds) of food aid from the government. But it was not enough. In the future, if this is the will of God, I hope my life will improve. The cash crops … the fields will get better.” 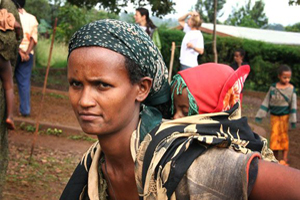 “My son has headaches, diarrhea sometimes. He is eating the Plumpy’nut very well. Plumpy’nut is very good because it saved my baby’s life. MSF gives me Plumpy’nut for the child, and it is enough for one week. I give him three servings per day. It is good because my baby has gained weight. I have two other children; one is five years old, and the biggest one is seven years old.

My husband is a farmer, he cultivates ensete and ginger. Ginger is not to eat. We sell it on the market to then buy some maize or teff (a grain used to make the basic Ethiopian meal, injira). It is not enough for us. The land is too small. We currently have one meal per day only. What I cook is ensete and CSB with oil. Before, we could eat two or three times a day; we had some maize. Because of the drought, the situation has changed. Right now, ginger is not ready and we will have to wait months before selling it on the market. We have not received any help whatsoever. Our future depends on the will of Jesus. I don’t know if it will be good or bad.” 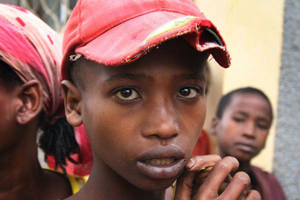 Aluye Takiso waits to receive treatment at the MSF center in Hadero.

“My son was admitted into the program three weeks ago. Since then he has slightly gained weight. It is difficult to find food from the market. We don’t have a big piece of land. My husband is a farmer but currently he is sick. He usually grows maize, ensete, and potatoes. At home, we have no more food stock at all. If we have money, we buy food on the market. Otherwise, we just don’t eat. We work for other, richer, farmers who give us some money. Before, we were able to have two meals per day, but this year we don’t have enough food even to eat once a day. When we can, we have some ensete. We haven’t received any food assistance, except from the MSF program. At home I have three other children who are older than Aluye. Only Aluye is in the MSF program but you know, it is difficult for the whole family. I am very much worried for Aluye because he may die.”