"We’ve already admitted more than 100 patients this morning, but a lot of people don’t meet the admission criteria and don’t understand why they’ll receive nothing when they have nothing.” 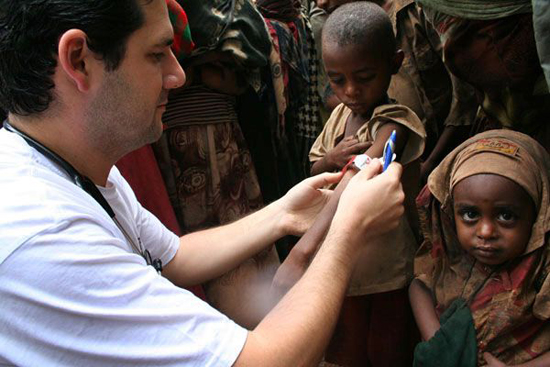 Without a doubt, they’re more than a thousand strong today, waiting in throngs in front of the Doctors Without Borders/Médecins Sans Frontières (MSF) outpatient center in Tunto. Hard rain beats down on the crowd. The children, who for the most part are barefoot, shiver in the cold.

In front of a sea of umbrellas that runs dozens of meters long, David, a Brazilian doctor, and Martha, a Danish nurse, hurriedly identify the children that meet the program’s criteria. “We’re doing what we call a rapid screening,” explains David, between two children. “We identify those who are severely and moderately malnourished by measuring the height of a child and the perimeter of their arm with a MUAC (mid-upper arm circumference) bracelet. We’ve already admitted more than 100 patients this morning, but a lot of people don’t meet the admission criteria and don’t understand why they’ll receive nothing when they have nothing.” 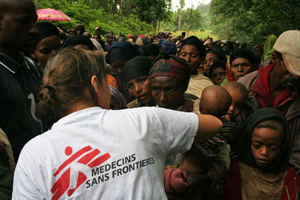 The Tunto outpatient center, built in the undergrowth in a remote corner of the Southern Nation and Nationalities People’s (SNNP) region, has been treating patients suffering from acute severe malnutrition for several weeks. But since July 21, the MSF program has also been open to children with moderate malnutrition who receive CSB rations (a blend of corn and flour), sugar and oil.

The launch of this “supplementary nutritional program,” which extends MSF assistance to the moderately malnourished, brings some hope to the many inhabitants of Tunto, which is the case with Zamane. Two days ago this young woman lost her son to severe malnutrition. Today she comes brandishing her two-and-a-half year old in the hope of leaving with several bags of food. “We’re hungry,” she says. “My husband is a farmer; he cultivates corn and ginger. The corn is for our family’s consumption and we sell the ginger at the market to raise funds for more corn. But this year, the price of ginger is very low while the price of corn is out of reach. On top of that, we’ve been experiencing a drought. It hasn’t rained for several months and we’ve had a bad harvest.” The first rains of the year, on which the small producers in southern Ethiopia depend, have been too little too late. 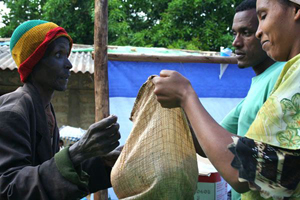 Further along, in the section reserved for the severely malnourished, Elfnesh, who is 4 years old, waits patiently in the arms of her mother for her daily ration of therapeutic food. “My husband married another woman and left me alone with our seven children,” confided Tagesech, the little girl’s mother. “We’ve had no food at the house and I haven’t received any food aid. Sometimes family members help us with a bit of food or we cultivate ensete and coffee on a little strip of land, but it just isn’t enough.”

Among the regions in the Oromiya and SNNP zones where MSF works, the district of Hadero, where Tunto is located, seems to be one of the areas most affected by the nutritional crisis. The numbers speak for themselves: in less than two months, the MSF program has treated 11 percent of children under 5 residing in the district, a disconcerting rate of severe malnutrition.

Another worrying sign is the rising number of adults admitted to the program. Among them is Tadwos, a man who looks much older than his 40 years due to severe malnutrition. Without a doubt, he’s been depriving himself of food in order to feed his wife and six children. For three weeks he’s been receiving nutrient-rich, ready-to-use therapeutic food, as well as a ration of corn, soy, and oil. “Without these rations I’d have nothing to eat. Before we could buy food at the market but the prices have risen too much. Two times I received 50 kilograms (100 pounds) of food aid from the government, but you know, it’s not enough for a family as big as mine. I hope that with the help of God, future harvests will be better and my life will improve.”

For Tadwos, Tagesech, and Zamane, their children and many others, the rains that are pelting down today and irrigating the fields won’t help; the next harvest of corn isn’t expected for another few weeks. Until then, they will continue to depend on outside help, and many will jostle to make it to the front of the line at the MSF center.