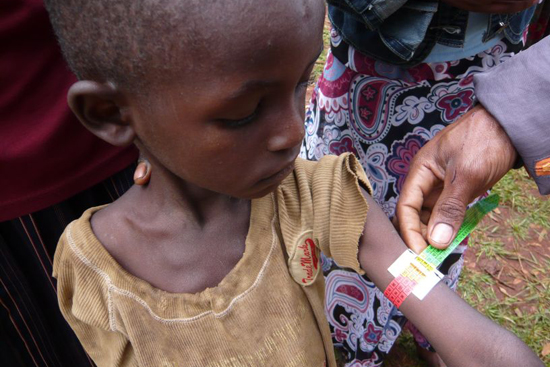 MSF staff screen a child for malnutrition outside of a supplementary feeding center in Gocho, Kindo Didaye district, SNPP region.

Nearly 40,000 people have received food distributions through Doctors Without Borders/Médecins Sans Frontières (MSF) nutrition activities in southern Ethiopia over the last four months. Although harvest time has arrived in some areas and is close in others, hungry crowds still gather at the entrance of the centers.

Since May, about 24,000 people suffering from severe acute malnutrition have been admitted to MSF’s nutrition program in the Oromiya and Southern Nations and Nationalities People’s (SNNP) regions in southern Ethiopia. The patients are mostly young children but the proportion of older children or adults is still significant in some areas. On average, two out of 10 patients are over 5 years old. MSF is constantly adapting its nutritional activities by opening new programs where needed, like recently in Duna, Sidama, and Gedeo districts, and closing some nutrition centers after a drop in the number of patients. In some places, people have begun to eat early maize taken directly from their fields; in other areas they will still have to wait one or two months. MSF has also opened a nutritional program in Teru, to the northwest of the Ethiopian capital, Addis Ababa, in the Afar region, where the hunger gap has not yet begun and approximately 9 percent of the children under five in this relatively small population are severely malnourished.

A total of more than 60 MSF nutrition centers provide medical care and deliver therapeutic food to severely malnourished patients. Several of these centers have hospitalization capacities for the patients suffering from medical complications associated with malnutrition. The majority of the patients improve within a few weeks by taking the therapeutic food and the medication they need at home and receiving weekly follow-up consultations in the nutrition center. 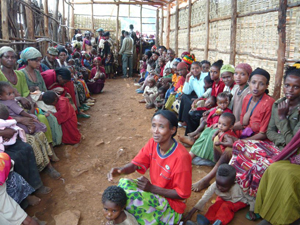 “When we began the intervention in mid-May, we were opening more and more nutrition centers as quickly as we could and severely malnourished children were coming in huge numbers. Over the past month, the pressure on MSF activities for the treatment of severe malnutrition has been slowly declining in most places,” says Renzo Fricke, emergency coordinator of MSF nutritional activities in southern Ethiopia. “For the children who were the most in danger, the treatment has been effective. For the others, the beginning of the activities for moderately malnourished children has limited the occurrence of new severe cases.” 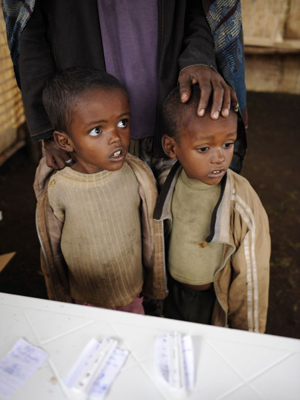 In Tunto, in the SNNP region, some days bring two thousand or so people to the clinic and the team has had no choice but to stop activities to avoid an accident in the crowd. Each MSF team is trying new strategies for better crowd control and for limiting the screening workload.

Some people continue to come day after day, still hoping that they will fit the criteria and get some food. Just as evident as the lack of access to food is the lack of access to healthcare. People can neither afford the price of the food nor the price of the medicines. Children are prone to worms and diarrhea and lots of malnourished adults also have chronic diseases.

Several miles from Tunto, in Mudulla, the queue of people stretches hundreds of meters in front of the nutrition center. Here, activities for moderately malnourished children are only just starting and the number of severely malnourished patients remains high. In this area, a quarter of the patients are children between 5 and 14 years old and 12 percent are adults.

Bogalesh is coming for the first time. A neighbor told her that she should go because she could get food here. She waited until she could move, as she is suffering from arthritis. Bogalesh stands almost five feet tall and weighs just 65 pounds; according to the nutrition criteria, she will have to put on 20 pounds before being considered cured. And every week, while she’s in the program, she will receive 10 pounds of flour, 1 liter of oil, and therapeutic food to eat twice a day.

This mother of five children had not previously received any food or financial aid directly, but one of her neighbors received about 100 pounds of flour in an emergency aid distribution and gave her 3 glasses of it a few days ago. As little as it was, this aid was most welcome; at a local market it would have cost more than what a man can earn with a day of work in a farm (5 birrs or 50 cents).