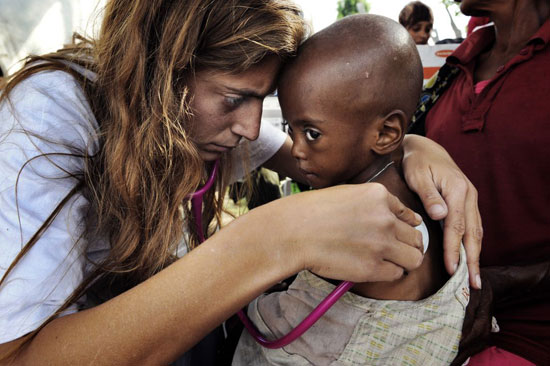 Mumishene was not yet two years old. The doctors in the intensive nutrition center at Shinshicho had struggled long and hard, even resuscitating him several times. But on a Sunday morning, as day broke, this little boy died. A low keening funeral song surrounded the Doctors Without Borders/Médecins Sans Frontières (MSF) vehicle as it bore Mumishene and his mother back to their village. The family wept as they learned the sad news and soon they were joined by the whole of the community. His fragile body shrouded in a few blankets, they carried Mumishene through an Eden of dark green maize and lighter green banana leaves.

Why, in the midst of this symphony of colors, with the life-force of nature burgeoning all around, are children visibly dying of malnutrition? Why are tragedies like Mumishene's afflicting this apparently prosperous region of southern Ethiopia?

Samuel, an Ethiopian member of MSF’s team at Tunto, in the Southern Nations, Nationalities and Peoples Region (SNNPR), explains: "Over the last few weeks, I've been talking a lot with the parents of malnourished children. They tell me that for five or six months there was not a drop of rain. Hunger started to set in. Some of the farmers around here managed to grow a scant crop of ginger to sell to traders, but they've no food to eat. The staples have become very expensive at the market. Compare the prices with last year—100kgs of maize, for example, has shot up from around 360 to 800 Ethiopian Birr ($37 to $82 US). The same with fertilizer—it is simply too expensive for the farmers. Now that we've got some decent rainfall, the maize and other crops are growing again. But we'll have to wait until the next harvest, in September or October, before we see any sort of improvement". 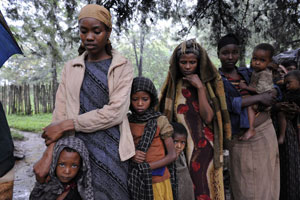 Mothers and children wait in line at an MSF supplementary feeding center in Tunto, Southern Nations, Nationalities and Peoples Region.

In urgent need of food aid MSF started an emergency relief operation in the southern Ethiopian regions of Oromiya and SNNPR on May 13, 2008. Since then, the teams have been constantly reassessing the needs in this area. Confronted by rapidly escalating numbers of severely malnourished patients, MSF has set up a total of 51 outpatient nutrition centers and five hospitalization centers. For children suffering from moderate malnutrition, other centers offering supplementary nutritional feeding were rapidly set up. By early August, more than 20,000 patients with severe acute malnutrition had been admitted into this nutrition program and about 8,500 children suffering from moderate malnutrition had received nutritional and medical help.

"The patients in MSF's care are just the tip of the iceberg," explains Rosa Crestani, MSF's emergency coordinator. "We are treating the most severely ill patients, but many others are suffering from hunger. They have exhausted their food stocks and right now they depend totally on food aid brought in from elsewhere. Food aid urgently needs to get through to these people so that they don't slip into acute malnutrition as well".

In the Siraro district of Oromiya region, MSF has contributed to the reduction of the occurrence of severe malnutrition by taking a comprehensive approach. Carrying out both therapeutic feeding programs and carefully targeted distributions has brought the number of patients in MSF's programs down from 1,251 to 971 over the last four weeks. 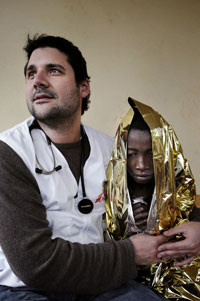 "An organization like MSF has neither the capacity nor sufficient stocks of food aid to employ this strategy in all the affected areas," says Crestani. The teams have opened some supplementary nutritional programs where every two weeks families receive cooking oil and 14kgs of flour.

"Many are so desperate they'll do anything!"

MSF's temporary rural centers are literally besieged by villagers. In the village of Ajora, in SNNPR, dozens of children wait barefoot in the mud, shivering in the freezing rain. Several are admitted into MSF's nutrition program, but many are turned away. "It's very difficult to send children back home because they're not malnourished enough, when you can plainly see that they are hungry and that their whole family needs help," says Dr. David de Souza, simultaneously trying to control the crowd and identify the patients at greatest risk. "Many are so desperate, they'll do anything to receive a little food."

Some patients cover vast distances to come to MSF's centers. "We even have patients who speak the language of distant regions like Wolayita or Hadyia," continues de Souza. "These are areas where the humanitarian needs are comparable to here, but where the amount of aid is clearly still insufficient."

To reach people who have not yet received assistance, MSF teams are still exploring new areas, like the Amhara region in the north, or the Somali region in the east of the country. MSF also set up new feeding programs in Afar region in the north, and around Chencha, Dita, Duna, and Bursa in SNNPR. Alarming rates of severe malnutrition had been reported in these areas.

As things stand, the agricultural, economic, and climatic conditions mean that there could be a gradual improvement in some areas, while in other areas the situation could continue to deteriorate. This is exactly what is happening on the highlands of SNNPR, where the crops will probably not be harvested until October. MSF teams will have to continually adapt their activities as the needs change, closing some centers and opening other new ones. 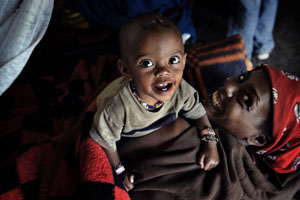 A mother and child play at an MSF feeding center in southern Ethiopia.

The last drops of the rain shower fall to the ground at Ajora. Shafts of light pierce the lowering clouds, illuminating the lush green of the fields. Southern Ethiopia seen like this is a million miles from the clichés of famine—dust-bowl landscapes and the white bones of dead cattle. But the crowds jostling at the entrances of MSF's clinics are a sharp reminder that even here, there is a desperate shortage of food.

At the intensive nutrition center at Shinshicho, the regular blips of the artificial respirator show that death is never far away. But MSF doctor Karianne Flaatten, an intensive care specialist, prefers to dwell on the children who will make it through. Here, as she well knows, they are the overwhelming majority. "This 15-year-old boy weighed no more than 20kgs," she says. "He was like a skeleton—he couldn't even open his eyes. For two weeks we were here at his bedside every day. Eventually, he started to look like a boy again. It really made me so happy; a shadow had transformed into a human being! Malnourished children always look somehow old and sad, and so adult. But with good nutritional treatment, before long they start to smile. You can start to look these children in the eye again."